Countless aeons ago, before the Time of Conflict and the Age of Heroes, there was equilibrium and harmony among the Gaean races. The elves lived in the woods and communed with animals, the dwarves mined the earth and worked their forges, and the humans built towns and plowed their fields. Magic was rare and weak, and only really mastered by the elves, who used it to further their connection to the forest and the fae creatures that lived deep within it.

The elves and dwarves were old, wise and experienced. They had mastered the arts and sciences long before humans first appeared on Gaea. Humans often referred to the elves and dwarves as the elders, because of their longevity and because they could turn to them for care and advice. It was a special kind of relationship, like that of a child with its parents. The dwarves were stern like a father, teaching the humans the truth of hard work and perseverance. While the elves were kind like a mother, nourishing the finer things in humans, like curiosity and poetry.

This situation changed when strange creatures started to appear that nobody had ever seen before. Dragons and manticores, werewolves and vampires, wyverns and giants. The worst of the creatures were the demons. The only thing that matched their cruelty was the incredible magic they commanded in battle and their ability to corrupt the hearts and minds of even the most righteous and steadfast.

They appeared gradually and over the course of several generations and upset the delicate balance between the elder races and the young humans. To their surprise, the elves found that with the coming of all these creatures their connection to the weave of magic had deepened as well. Their first instinct was to use that newfound knowledge to retreat deeper into their forests to protect themselves from the chaos. The dwarves learned how to infuse their ore and forges with magical power soon after.  In turn, they used their new abilities to carve powerful runes and wards onto the gates of their mountain fortresses, closing them in horror. 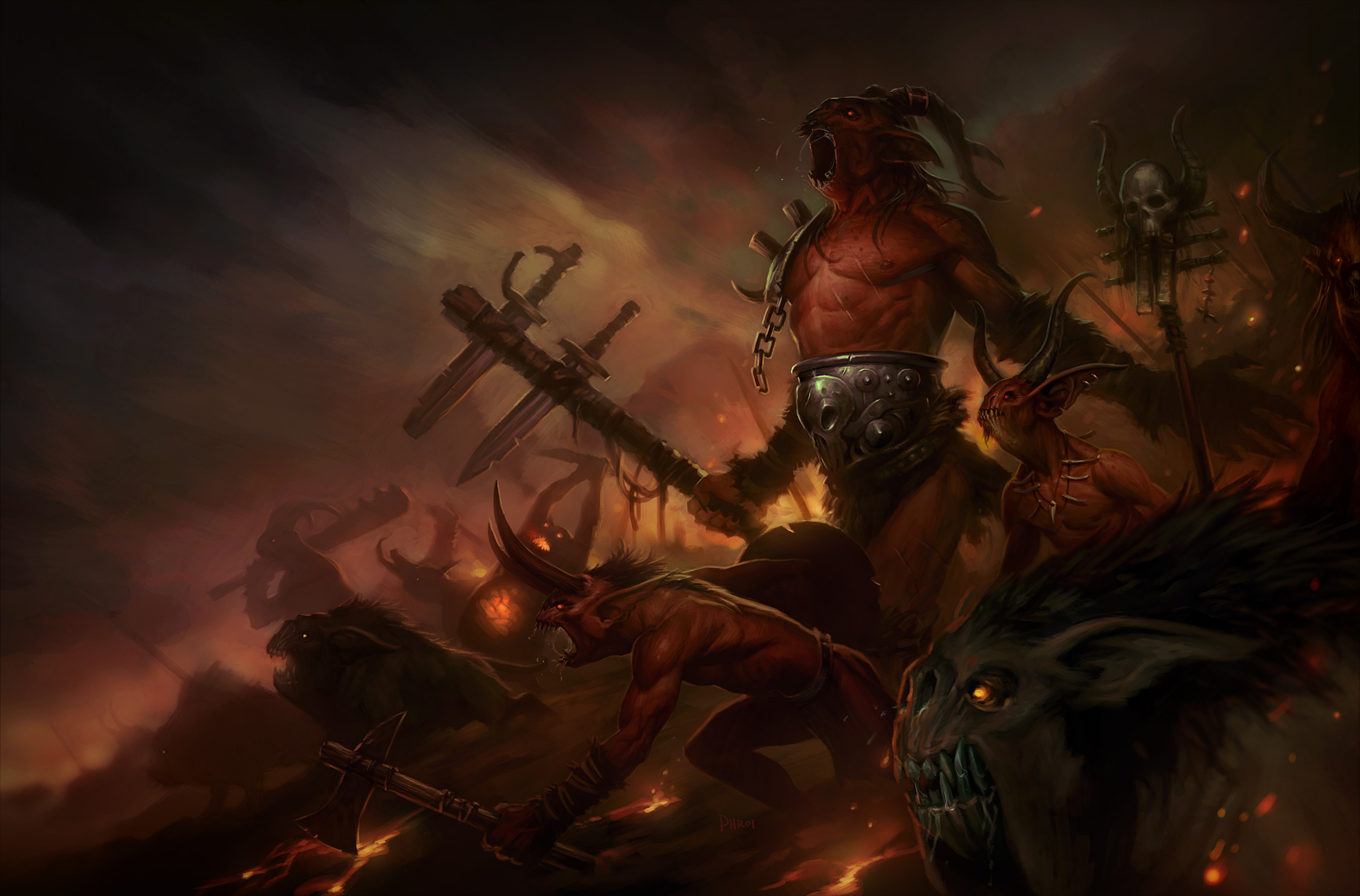 The humans were far too young and too inexperienced to have the gift of magic within their grasp. Unable to defend themselves like the elder races could, the humans quickly found their towns and fields overrun by demons. When they turned towards their allies for help, they found the forests impenetrable and the mountain gates closed. They were turned away. The pain this rejection caused was such that it would permanently alter the way humans regarded the elder races.

For generations the humans suffered at the hands of the demons and magical creatures that ran roughshod throughout the lands. Their homes were burned, their fields were spoiled, their minds were corrupted, their flesh was lacerated and their children were taken. The horrors that were inflicted upon them while the elder races hid in their sanctuaries further deepened the rift.

Their short lives had taught humans to be ambitious and resourceful. So when the rising level of magic finally put it within their reach they started experimenting. Soon after they found themselves capable of harnessing magic enough to start fighting back. Sorcerers found increasingly intricate ways to harness more power from the weave and priests found that their prayers became ever more effective. All within the help from the elder races. It was the first achievement of the emancipated humans.

As soon as the humans started to achieve some minor success in their own defense, the elves took notice. They reprimand the humans for their recklessness, telling them that the humans did not have the wisdom to harness the power of the weave. They argued that exposure to the weave of magic would leave the humans vulnerable to corruption. The resurgence of magic went hand in hand with the coming of demons, after all.

The admonishment was the nail in the coffin of the trust humans once had in the elder races.

For generations the power of magic grew and so did the understanding of it among the different races. They came to discover magic was like the tides; it would roll in and out of Gaea. In times of high magic the fabric that separated the different planes of existence wore thin. Causing rifts or opening up portals between one plane and another became easier. In times of low magic, these rifts would heal and opening portals became much harder.

When powerful demons opened up rifts between to Gaea it caused ripples across all planes. Sometimes these ripples were strong enough to cause small fractures that allowed other creatures from other planes to pass through to Gaea as well. And how the demons reveled in the chaos they sowed.

The most notorious rivalry was that between the demons from the Abyss and the devils from the Nine Hells of Baator. They had been in conflict with one another in what they called the Blood War since before time began on Gaea. They had long since fought each other to a stalemate on all fronts and what they needed was a new battleground that could break the tie.

And so Gaea was used as a fresh battleground in the Blood War. The first things demons and devils would do when they came through to Gaea was corrupt and sacrifice anyone and anything they could find. The blood fueled their magic, the newly corrupted joined their demonic ranks, their power increased and the Gaean skies darkened.

The humans fought for their survival. Against the magical beasts, against the demons, and against each other as kingdoms, tribes and clans were corrupted to join one side or the other in the Blood War. Powerful artifacts were created, or recovered from fallen demon princes or Baatezu archdukes. Fortresses were erected whose walls were inscribed with powerful warding magics all in service of the survival of the human race.

For aeons the survival of the human race hung in the balance. But eventually the tide of magic rolled back out and magic once again subsided. The rifts in the fabric between the planes started to heal, closing off access to the other planes to all but the most powerful creatures. The humans slowly got the upper hand and most of the demons and devils that were left behind were slain. Inevitably, some of them went deep into hiding, subtly manipulating things in preparation for the next tide of magic to come rolling back in.

The elves reemerged from their forests and the dwarves opened their gates. They found a radically different landscape, with strange creatures inhabiting it. Humans were changed as well, no longer resembling the young race that they had turned their back on. The elder races had forfeited the upper hand, both morally as well as militarily. It would be a long time before magic would be at its peak again, before the races would once again be faced with such incredible evil. Hopefully, it would prove to be enough time to mend the rift between the humans and the elder races.

What happens when the different planes of existence occasionally come in contact with each other, where the fabric between the planes tears and allows passage from one plane to the next? What if hordes of demons are working from the Nine Hells and the Abyss to tear open the thin membrane to pass through and wreak havoc and dominate the prime material plane? What if Elysium and the Seven Heavens are working to prevent this? Celestial beings are fighting infernal ones and the prize is dominion over the prime material plane. The celestial forces are more powerful, but far fewer in number. The infernal forces are numerous, but infighting and backstabbing undermine their efforts.

The bleak atmosphere of The Witcher and Ravenloft. The Celestial vs Infernal clash of In Nomine and Diablo. The planes of Planescape.

The Conjunction of Planes is a concept lifted from The Witcher’s Conjuction of Spheres. But then using the outer planes model that’s used in D&D. 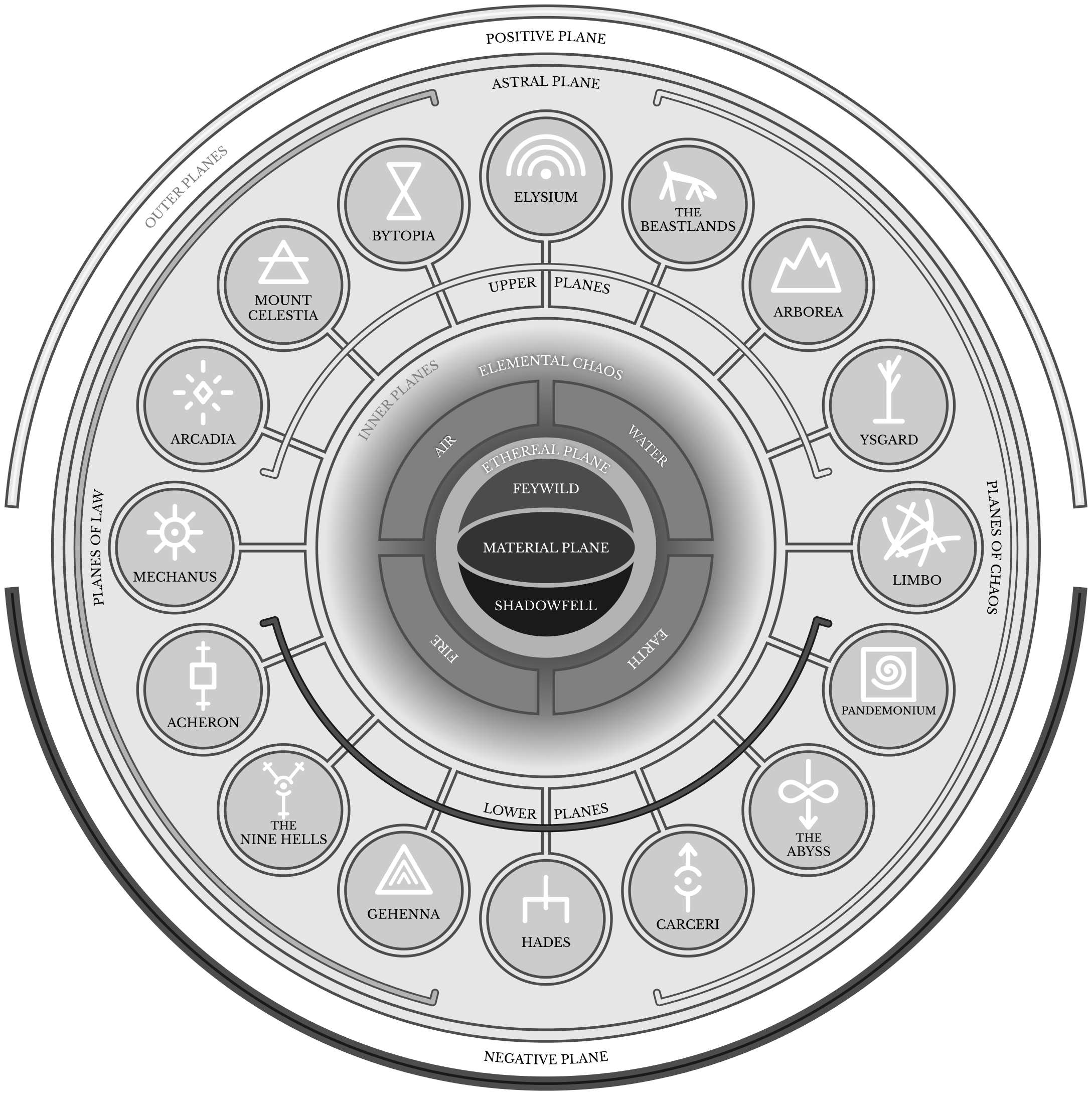 While it’s tempting to use the Forgotten Realms as the setting, there is too much canon to ignore. We can simply use the outer planes that are commonly used in all D&D settings (adjusted to suit the setting) and build a setting around it.

It would likely start with a rather generic fantasy trope familiar like we see in The Witcher, Lord of the Rings and Game of Thrones, set in a medieval European inspired land set with elves, dwarves, halflings, orcs, ogres, gnolls, etc. In that sense it is not dissimilar to the Forgotten Realms. The big difference is that magic will be far less prevalent than in FR. Magic is potent, but dangerous. Magical items are artifacts from a bygone age and only a select few people have a true grasp of magic and they guard their secrets closely. Common folk are superstitious, follow a pantheon of different gods, deities and powers. They appeal to witches, crones, druids, hermits and pellars to grant them health and good fortune, but fear them in equal measure.

An adventurer who is magically gifted, either with nature (rangers, druids), divine (priests, clerics, paladins) or arcane (wizard, sorcerer, warlock, witches, warlocks, shamans) magic, is a rarity. Warriors, archers and rogues generally found their comeuppance as a soldier in one of the many wars, as a mercenary in one of the numerous companies, or on the cut-throat alleys of the larger cities. The fact that they survived their battles in order to strike out on their own is proof of their exceptionalism.

I think it could be very useful to suggest to players that they should consider a character background where they are somehow an outsider and not part of the establishment. Whether that means that they are magically gifted and therefore both feared and respected, or because they always had a different outlook on life than their brothers and sisters of whatever order they belonged to, there needs to be a good reason why they leave the comfort of numbers and venture out into the world by themselves as adventurers. This is a world where only the gifted and exceptional can make their own way, while others have to band together behind walls and in towns, villages and farming communities. Straying from the village and venturing out into the woods means falling pray to lycantropes. Leaving the undermountain for the surface wilds means getting crushed by ogres and hill giants. Leaving the tops of the songspire trees to walk among the ruins means awakening the dead and ancient evils. There has to be a reason why they did leave their communities, or why they were never accepted in their communities in the first place.

Which brings me to the next point; the players will need to make a very conscious choice to have their character be familiar with, or be a stranger in, the area that the campaign will be set in. If they are familiar with the area, then they will have a cultural understanding of the significance of certain customs, traditions, superstitions and certain legends and lore. Equally, they will likely have a personal stake in what happens to the area. They might fight for friends, family, social redemption, etc. If they are strangers, than they will be regarded with suspicion, discrimination and will likely start off with social penalties. They will probably also have to play catch up when it comes to the cultural and historical significance of certain events.

The DM will provide a general overview of the different areas the story could take place in, hopefully with enough information so that players can make a decision where they would like their character to originate from, and what kind of background they would like to have.