While running today, Joasia commented that even during the lockdown, when the amount of litter in the streets has been much less, it seems as if there’s a rule here that if you get McDonald’s, that after you’re done, you throw your garbage into the street.

I’ve noticed that the response to the government’s introduction of the various social distancing guidelines has been quite different in the Netherlands than it has been in England. The Dutch response has been lacklustre among a lot of the people that I know, with many people not taking it as seriously as I think they should. In contrast, the English response has been much more diligent. Now, I realise this is completely anecdotal and that it could very well be due to knowing different people in England than I do in the Netherlands. However, I think there is also something culturally different, where the English are also somewhat more obedient when it comes to these things. Culturally, the English are much more aware of decorum and have a stronger sense of politeness, and I think this fits neatly with what I have observed. As a result, I am completely mystified by the following:

Why is There Litter Everywhere?

I don’t know whether it’s a cultural different, a socio-economic difference, a waste-management difference, or some other societal element at work here, but it’s remarkable just how much litter there is on the streets and in the parks of Exeter. Most of the time it’s plastic soda bottles or crisp packages, leading me to think that it’s younger people who drop the garbage on the street.

I’ve never quite understood why people would litter. I’m always amazed when the lights in the cinema go on, and people shuffle to the exit, just the amount of garbage they leave behind. Often I mutter “people are animals” as I carry my empty bucket of popcorn with me to drop it in the bin, as I wade through and weave around everything that people leave behind. I’m not just virtue signalling here, I honestly don’t understand what motivates (or doesn’t motivate) people.

Once, I was walking down the street in Amsterdam and saw a girl rummage around in her pocket while walking with a friend, and then dropping the contents (some pieces of paper) on the ground. I stopped her to say that she had dropped something. She casually told me it was garbage, and I pointed out the garbage can that was perhaps fifteen steps away. She responded by saying that she pays taxes for people to clean it up. I was floored by that. By how rude, lazy, entitled and completely bent that way of thinking is.

And here, in England, where people tend to be quite obedient, I just don’t understand what moves people to chuck their garbage on the ground.

Joasia has suggested that due to the large number of seagulls that fly up the estuary, who pick the garbage from the bins and spread it around, there is a lot of litter on the streets. But that means that garbage is overflowing and requires more regular pick ups. It means tidiness isn’t valued very highly.

Rural areas don’t seem to have the same problem, from what I’ve noticed. Fewer people, sure. But I think there is also a better understanding and appreciation of the natural beauty of their surrounding. Garbage collects garbage, they say, and I think that if your surroundings are dreary you tend to care less for it.

Why are There So Many Cold Calling and Scammers?

I’ve had a mobile phone since 1995 and since then I have never once been cold called by someone wanting to offer me something, either products or assistance. For as long as I can remember the Netherlands has had the “Do Not Call Me” registry, which made it illegal for companies to call you if you were on that registry and wanted to be left alone.

Since moving to England, I’ve received text messages and robo-calls about twice a week. The messages tend to try to get me to visit a dodgy URL, while the robo-calls are always the same; a woman tells me that they’ve been told that I or one of my family members has been in a traffic accident that wasn’t my fault. When you say that this isn’t true, they say goodbye and hang up.

How is this legal? And how in all that is holy is this profitable!? How many people are foolish enough to fall for this? What does it say about a society where this persists?

When I spoke to Joasia about it she said that she has also had it since getting an English mobile number. When I mentioned it to my colleagues they said that it was normal. It’s not normal, it’s bizarre, and it betrays something is fundamentally wrong with this society.

It’s rather remarkable how big the wealth gap is in England. I don’t mean the gap between working class and the elite class, but the lower class and the upper class, since the middle class hardly seems to exist. People seem either more than comfortable, or they are living pay check to pay check, barely able to keep their finances together.

You can see it in the amount of homeless people. It’s not just London, Birmingham and Manchester, it’s even in small and mid-sized cities. Also in Exeter, as city that barely reaches above 100 thousand people. Sleeping in doorways, panhandling, begging, and largely ignored by the average passers by. They are ignored because the average person has their own issues to deal with and they know that helping won’t change the systemic problems that caused them to become homeless. Help one off the streets and another will take their place. These people have no place to go because there are no shelters and there are few resources that can help them get a grip on whatever problem caused them to spiral into homelessness. Whatever services do exist have limited funds and simply can’t help everyone. And so you see people sleeping in doorways and pitching tents underneath overpasses.

You can see it in the corpulence of the people. So many of the people here are incredibly obese. To me this indicates that people either don’t have the funds for nutritious food, don’t have the education to differentiate nutritious food from garbage, or eat because it offsets some of the misery they deal with in life. It’s not surprising that people rely on the NHS so heavily, since their overall levels of health are so poor. They have no choice.

This ties neatly into part of the xenophobia underlying the Brexit sentiment, because the debate was successfully framed by Brexiteers as a matter of free movement causing undue strain on already strained social services like the NHS. Of course, research shows that people from outside Britain were less likely to make use of these services, and that if they were to leave, the NHS would have a crippling shortage of qualified personnel that British people wouldn’t be able to fill.

Another sign; education is slowly becoming unaffordable in the same way that it already has in the United States. A lot of people who are recently graduated are stuck with enormous debts which will take a decade or two to pay off, depending on their chosen field. This means that people start buying houses late, don’t build their assets, which causes anxiety in a society where retirement benefits are a joke. England has enormous levels of personal debt.

I could go on. In the end, anxiety reigns, which in turn leads to sincere mental health issues, which exacerbates all of the above problems. Unless you have a good income, some personal wealth, then you are better off growing up elsewhere in Western Europe, where there are more opportunities for upward mobility.

Moving my belongings over to England has been quite successful. The moving company that gave us the best quote allowed us to fill a dedicated truck full of items and have them driven over. The alternative would have been to share a truck, which would drive the cost down significantly, but unfortunately, no trucks to this area were planned for a while. So we filled the truck, using about one-tenth of half a percent of the truck’s capacity.

The driver was a cool Polish guy named Bartek, and he was not very eager to drive a 150 pound crossbow across the border, but did everything in his power to make it happen. It worked out well.

Now the apartment in Amsterdam is pretty much empty, and we managed to arrange for Robin to live there for the coming year. That would allow me to have a fall back scenario just in case things don’t work out with the new job here. His girlfriend moved over from London a few days before I moved to England, and they’re going to move in together. I can’t imagine having an easier transition in that situation than that.

I’m going to miss gaming, but we’re scaling back our frequency to once a month (but with more hours each session). We even picked up a new player by the name of Eugenio, in the wake of Edwin deciding to quit gaming. He sat in on a session and seems really eager. I’ll likely be back in Amsterdam for the weekend mid-October and have another session.

And now I have another handful of days before I start my new job, which I’m both excited and nervous about. In the meantime, I am being confronted with English bureaucracy. Opening a back account, applying for a national insurance number, getting background checks done for my work as well as my landlord, etc. It’s unpleasant. I’m not very good at this. I consider it a distraction. It costs me a lot of time.

It’s lovely to continue living with Joasia now that her sabbatical is over. The situation at my previous employer was the spark, but the idea of continuing to live together was the catalyst. My family is very supportive, which is nice. I will have to make sure to go back often enough to cater to everyone, while simultaneously also getting to have fun. Hopefully I will be able to make that work.

Last weekend we hiked abouth 9km on Exmoor. We started out from Lynmouth, up the East Lyn River to Watersmeet, crested the hill at the Parish of St. John the Evangelist and returned along the coast back to Lynmouth. The first part was forested, the second part was cliffs. Stunning. Here’s a few photos I took. 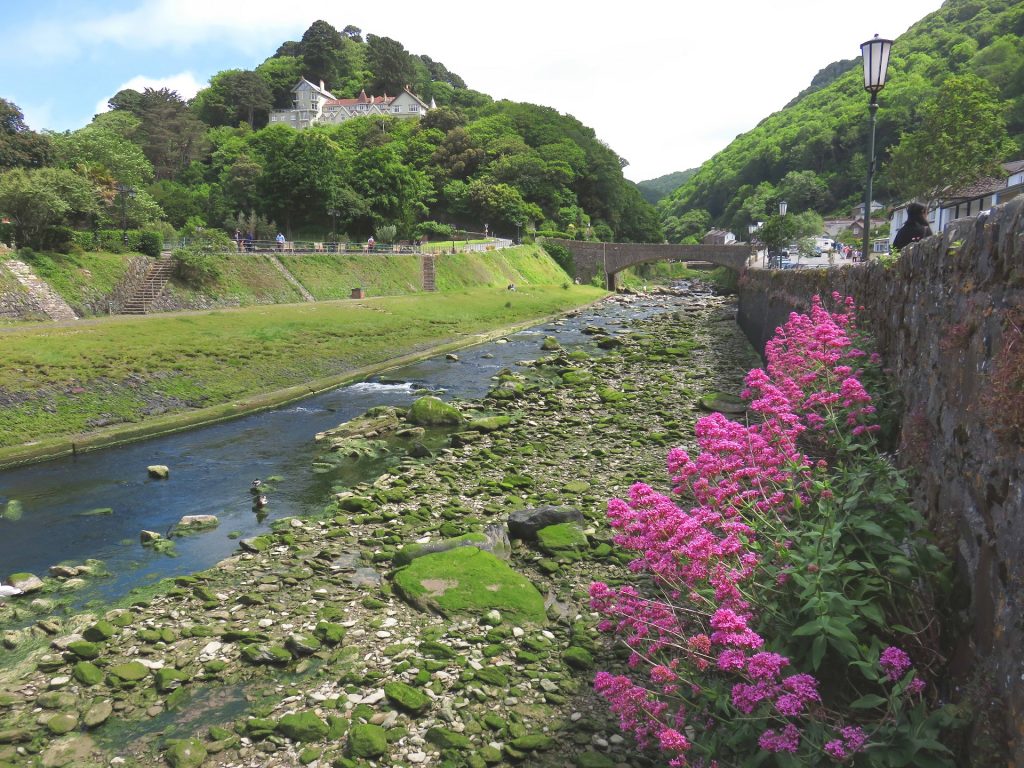 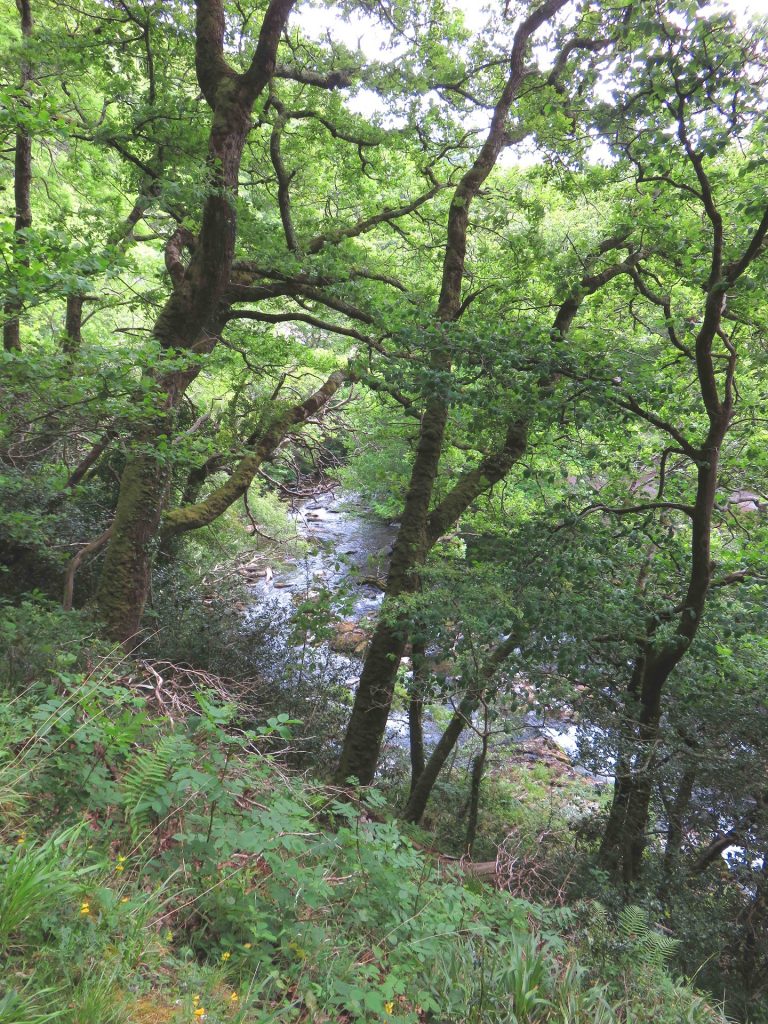 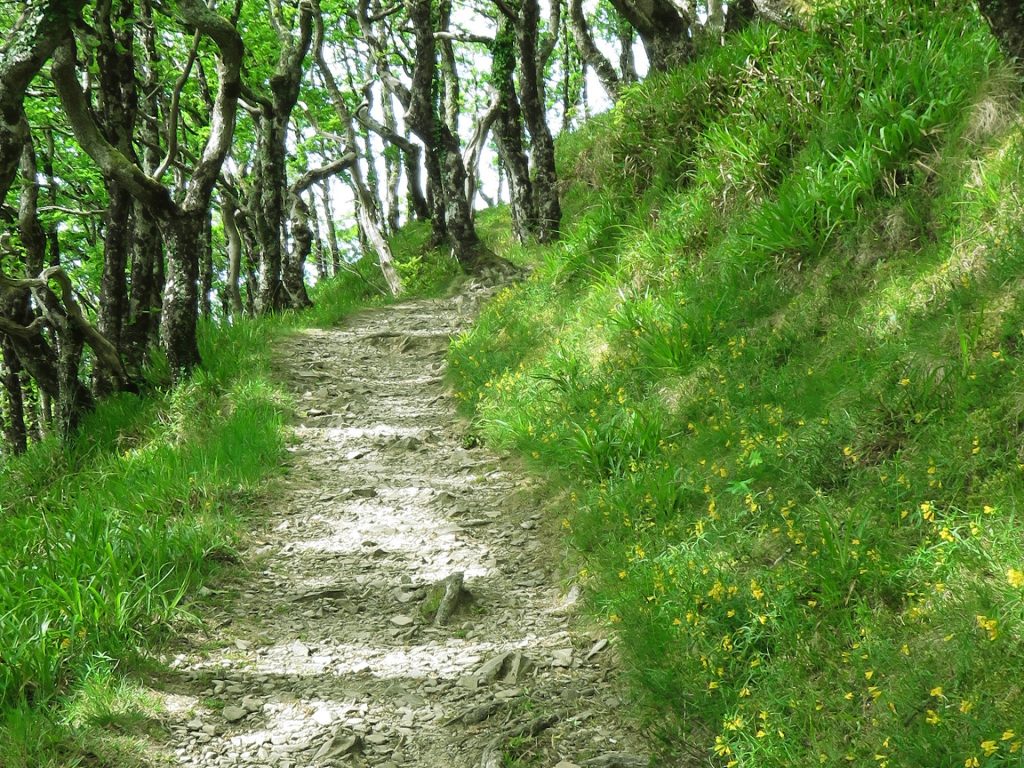 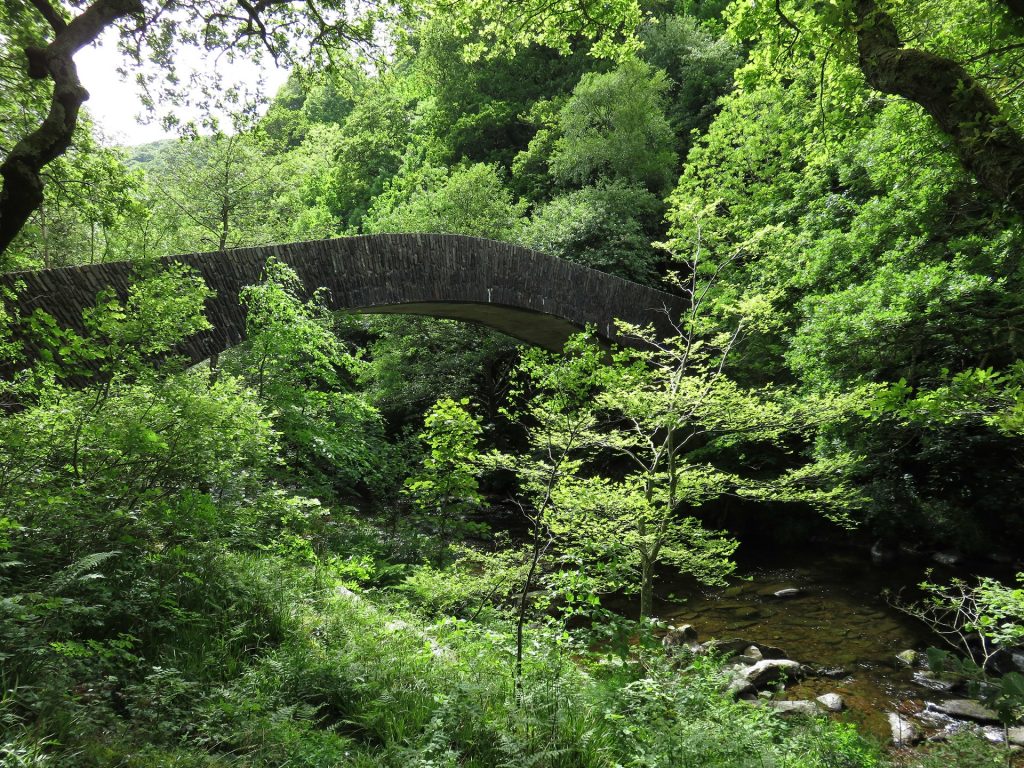 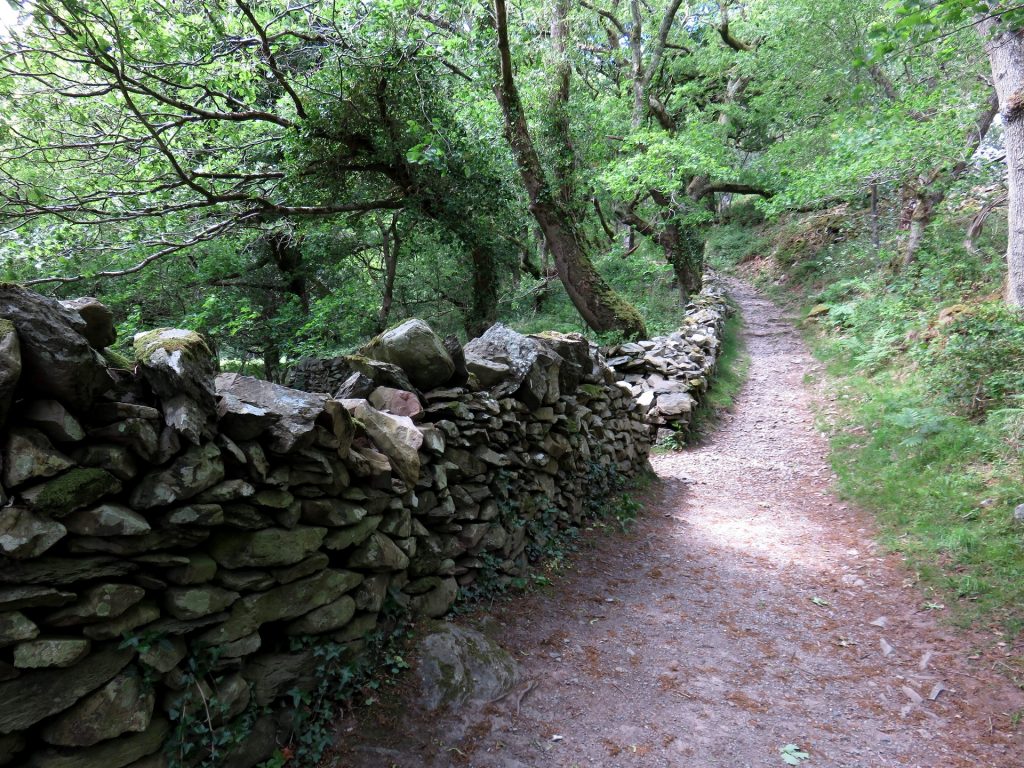 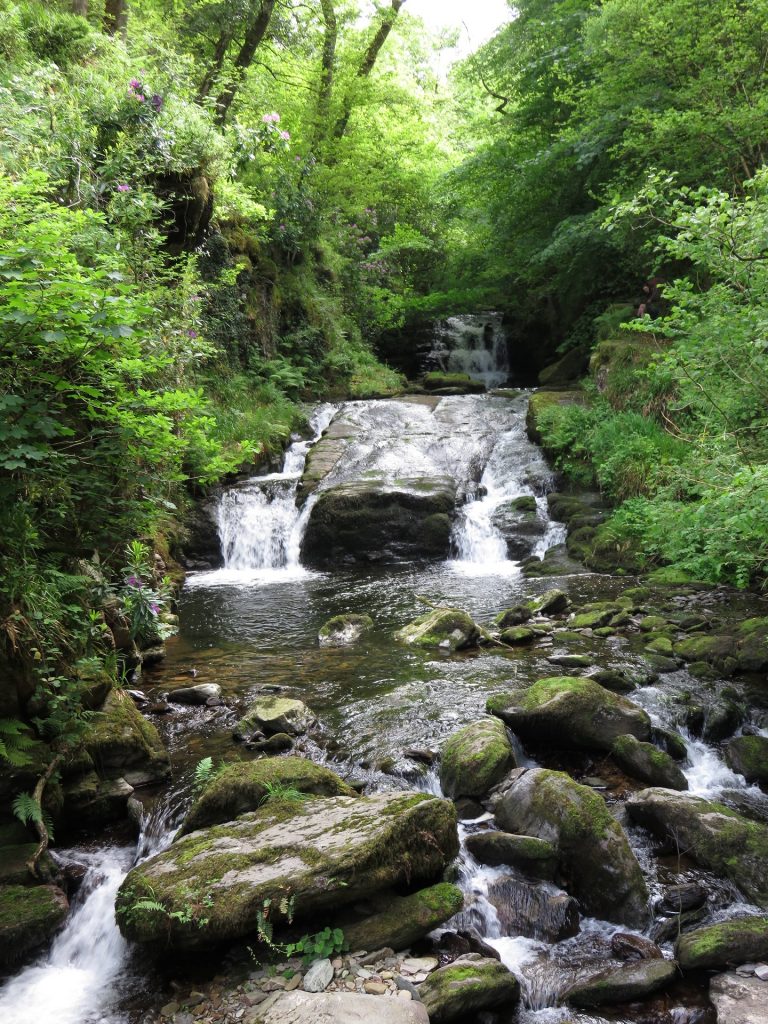 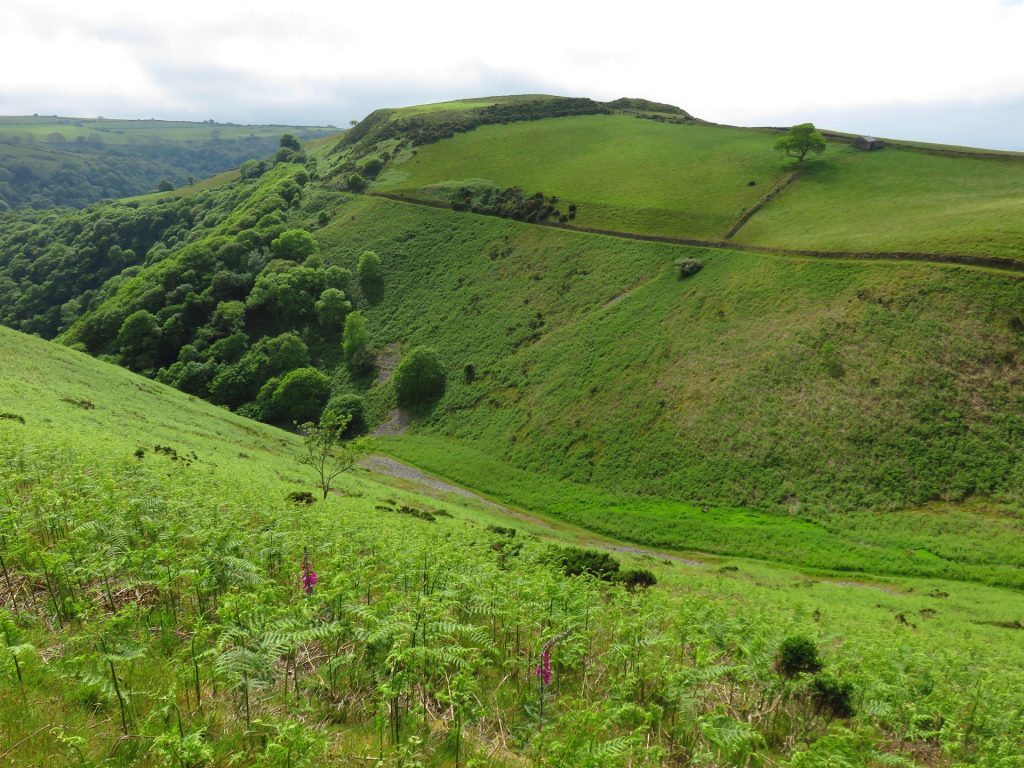 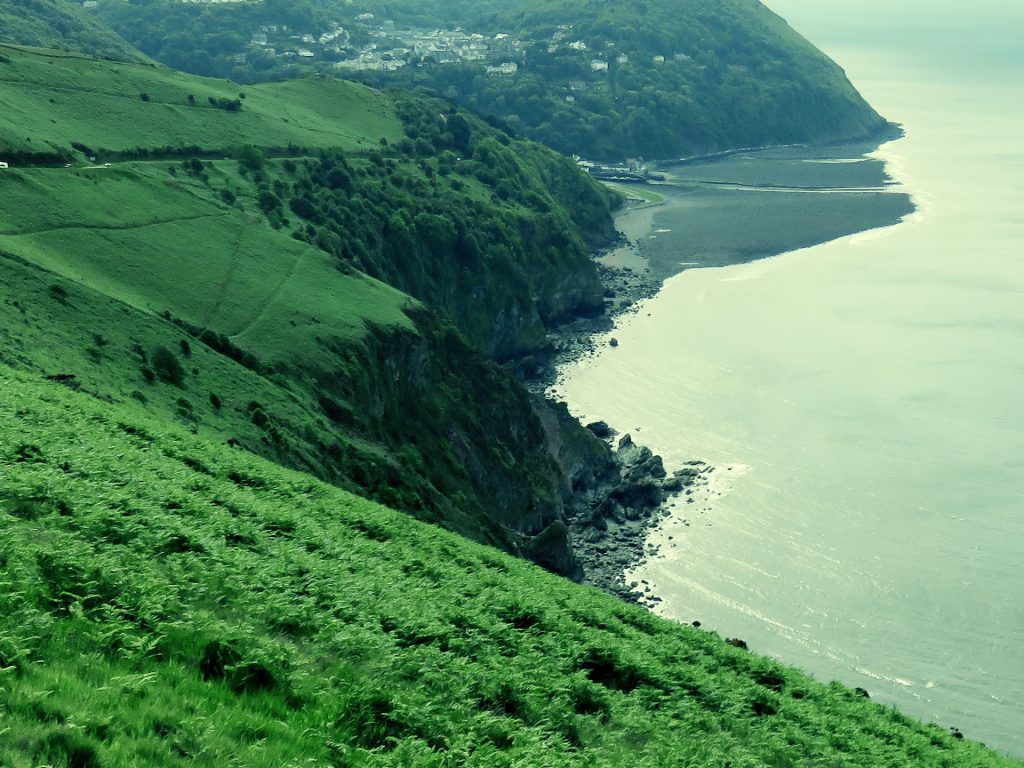