A month or two ago Frank called me and asked me if I was up for a daytrip to Geneva, Switzerland in order to visit the organisation europeenne pour la recherche nucléaire, or CERN as it’s more commonly known as. It’s the home of some three thousand researchers and the worlds largest hadron collider, the LHC. The campus straddles the border of Switzerland and France, which is symbolic for the multi-national effort towards the advancement of science and our understanding of the universe.

Did I need long to decide to come along? No.

The plan was hatched as a birthday present to Frank’s good friend Roger, but Frank knew there’d be more geeks and nerds ready and willing. So I was called. Kevin, Roger’s brother, was called. And we called my good buddy Dennis. We all chipped in and split the cost for Roger’s flight and hotel room between the four of us.

The five of us took a flight on wednesday, June 29th, arriving at our hotel at around 23:30. We checked in; Roger had his own room. Kevin and Frank shared a room, and the Dennii shared a room. When I came out of the bathroom after freshning up a little bit, Dennis was on the phone with an acquaintance he knows that lives in Geneva and he decided to go and have a drink, leaving us to fend for ourselves. (Many times during the trip we commented that the only reason that we took Dennis along is because he spoke French, on account of having lived in Paris for a while.) The four of us went to explore the city, which was beautiful and largely deserted.

Like most of Switzerland, there’s a lot of money and it shows. Beautiful buildings, healthy people, shiny cars and all set in the most amazing countryside you can imagine. Unfortunately it didn’t seem like many of Geneva’s residents liked to go out late at night for a drink. Even counting the fact that it was a wednesday evening, the place was pretty deserted. (Or should I say pretty and deserted?) We finally found a place that was serving drinks around midnight, along the Rhone. The place was horridly expensive and it seemed like we arrived at the tail end of a party of expats. The ones that remained were pretty toasted and not really the kind of toasted that made me jump up and introduce myself while stone cold sober. Two rounds of drinks later and we were out of money (I told you it was expensive) and we decided to leave.

On the way back to the hotel Frank intimated to me that he was up for some more adventure. Kevin and Roger; not so much. At the hotel we asked the bartender if he was still serving, he wasn’t. He told us that a club called Velvet was probably still serving, so off Frank and I went. Velvet turned out to be a very, very swank club, completely deserted with the exception of about a dozen stunning eastern European women who offered us things we couldn’t afford. The drinks were good but expensive, and Frank and I wisely stayed away from anything too exotic, although I was tempted to find out what a 9,000 euro bottle of Roederer tasted like.

We talked until 4:30 in the morning, drinking our drinks and enjoying the women, about all kinds of different things, but mostly about life and about death. It was a very good conversation, and even though the sun was almost coming up by the time we left the club with the girls whose shift had ended, it was worth the sleep deprivation. Frank and I asked directions to the lake, which we got, and we slowly sobered up. Again, it struck me just how incredibly beautiful that country is.

Once the sun was up we looked for some food as we searched for our hotel. 5:30 am sandwiches straight from the baker’s oven are heavenly. When we arrived at the hotel we had the chance to take a shower and change clothes before we met Roger and Kevin for breakfast. Then we were off to CERN. 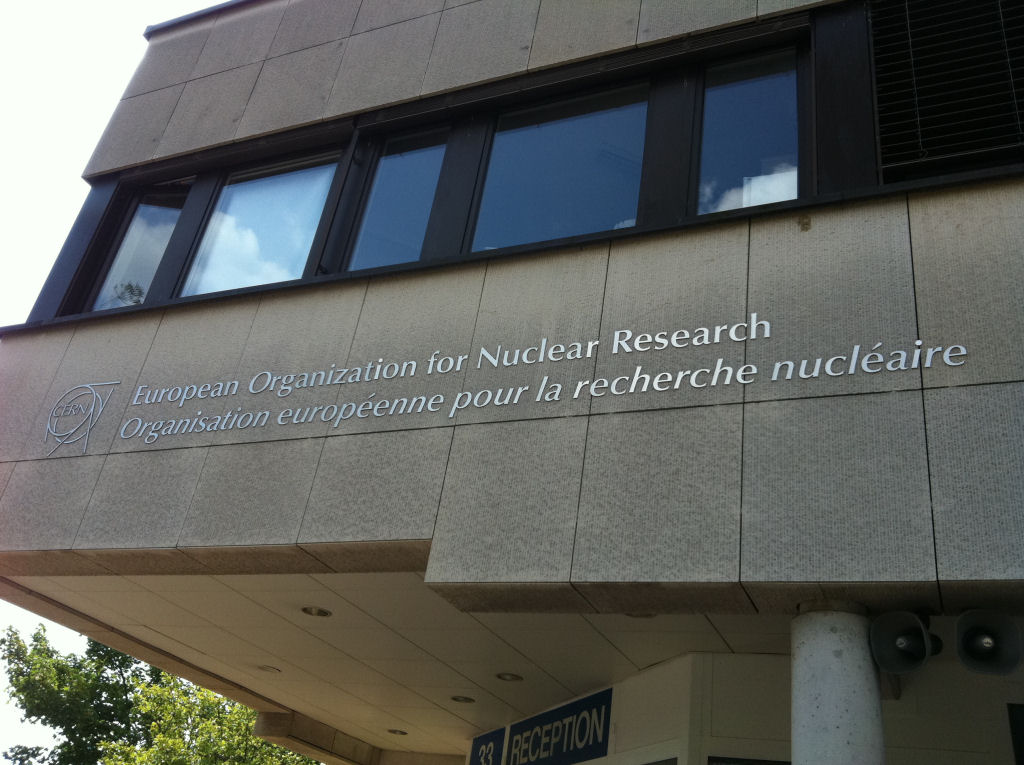 I wasn’t really sure what to expect. I knew it was a tax-payer funded operation (did I mention that the tour was free of charge?) and therefore I didn’t expect any secrecy, but the openness that we found there was quite surprising. Sure, we weren’t allowed to go everwhere, which we found out pretty quickly when we approached a gate in order to take a look at a big map of the campus to figure out where to go and a security officer, afraid that we were going to walk into the gate without permission, almost stumbled over his legs trying to stop us, but everyone was friendly, you could see everything, if from a distance. No Area 51 type antics here.

We waited in front of the visitor’s building for the tour to start and were joined by Dennis, who had made his way over to CERN from where he’d spent the night. When the tour started, we first got an introductory film about how CERN came to be. Right before the end of that film, in which I nodded off about a half a dozen times, not because it was boring but because the adrenaline of the night out was finally dying down, a man walked in and I saw Kevin and Roger getting visibly excited. They obviously recognised the guy in a way where I was left wondering if I should have recognised him, too. It turned out to be Bill Murray (not the actor), who heads the ATLAS project, the primary project looking for the Higgs-boson. He was the man that was going to give us the tour of the premises and he’d been a bit late because his daughter had lost her passport on the tram that morning. It struck me as odd that a man of his importance was going to give the tour. I asked him if he had lost a bet, but it turned out he liked doing it and he did it about once a month. Truly our luck that we got to get such an esteemed and incredibly bright and knowledgable man to give the tour.

Because of an important conference at the end of July, the LHC was running at maximum intensity and we weren’t allowed in the tunnels, but… to be honest… I’m not sure if that was such a bad thing. The tunnels is all anyone ever remembers about CERN and there’s really nothing to see. Instead, we got to go to the ATLAS control room, where all the data is collected and analysed before it’s either discarded or prepared for storage and distribution to the various institutes all over the globe. Now that was interesting! And impressive!

You know how Newton had to come up with brand new methods of calculus in order to found his theorems? Well, these dudes have the same thing. They have to invent new machines, particle detectors, radiation resistent glues, you name it, just to do their research. The information density of that tour was pretty high, and I certainly don’t want to recall all of it in this post, but if you’re interested, we can sit down and talk about it over drinks. :)

One of the things I really think I should mention is how inspiring that place was. For some reason they designed the entire campus in such a way that most of the technology blends into the countryside really well. The countryside itself is beautiful and inspiring with the Mont Blanc within visual range and the Jura mountains so close by it looks like that scene from Inception, where the young girl folds the ground in on itself. You look over to the left and you stare up against a completely green, vibrant mountain looming over you. Perhaps I was so impressed by it all is because I’m Dutch and we have, like, no mountains whatsoever. But all that technological might blended so wonderfully with all that natural glory… It makes you want to be part of that. Everyone that works there is smart and they do all this amazing work and on top of that it’s so beautiful… Who doesn’t want that?