Fifteen years ago, on new year’s eve 1999, Eva, Ruurd and I made a pact that we’d go and do the Nieuwjaarsduik, or “new year’s dive,” which is a national tradition that a small group of people engage in, every January first, at exactly noon, where they take a dive in the North Sea. Heightened by the new year’s eve bubbly, we all solemnly swore we’d get up the next morning to do this.
Of course, I when it came down to it, both Eva and Ruurd backed out.

When Big Jim decided to come and celebrate NYE here in Amsterdam, I knew I had a new shot at this. We found a group of people in Zandvoort aan Zee, who were doing it at 14:00, which was a time that suited the time we went to bed a little better. Due to getting up rather early and feeling pretty good despite our late night, we decided to go to the beach a little early.

We actually made it a little before noon. As we got to the beach and were confronted by both the wind and the waves, Jim started to get really excited about the prospect of taking the dive.

I spotted a small group of people getting undressed and it became clear to me that it was a group going to do the dive at noon. We wouldn’t have to wait until 14:00 and we could just get it over with. So I approached what looked like the ringleader and asked him if we could join. He said yes, but only if we got undressed quickly. So we did.

They were doing the countdown, but then they didn’t immediately run in, which bugged me, so I just set off running, not wanting to lose my nerve. One of the kids belonging to the other group decided to race me to the sea. I won. :)

It was cold. Very cold. But not as cold as coming back out. Actually, the water was rather mild. It turns out, the average North Sea water temperature for the winter months is 6°C, and the temperature goes down near the shore. The air temperature was 3°C (-2°C counting the windchill factor), and that was the bad part.

Here’s some of the photo’s, they’re not great quality, because everything went really fast, and we certainly don’t look sexy while doing it. There’s a lot of yelling and such. 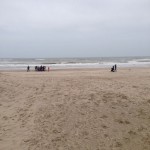 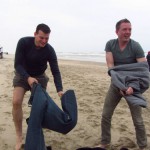 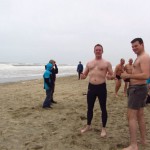 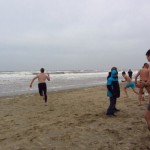 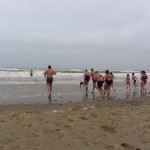 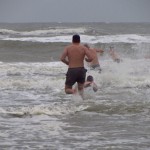 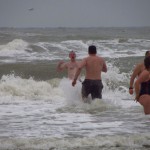 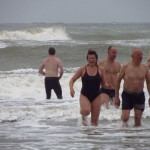 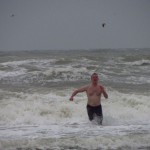 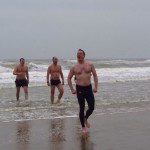 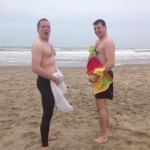 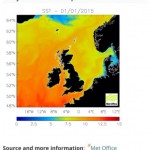