During my stay in Glister I’ve heard many curious tales about a great orc empire, supposedly responsible for the barrows on the Thar, the standing stones on the Oldmark, and many more wondrous structures hidden away in the secluded woods of the Galena foothills. I’ve always considered it poppycock. There is no evidence to suggest that orcs are capable of anything but the most primal urges. Never in a the last hundred lifetimes have they shown any interest in the type of collaboration necessary to achieve an undertaking of that magnitude. The lower humanoids are crude, and even if there would be an individual who’d have the intellect and mental fortitude to achieve something, it would never be supported by their brethren. I believe that exceptions can occur in individuals, but nothing that could support an empire.

After the fight, when Sigbart was on death’s door, David created a fire. The element of surprise had been lost and tending to Sigbart’s wounds would be easier by firelight rather than moonlight. Jago, ever pragmatically clever, set a ring of torches around our camp, beyond the range of the blowpipes the troglodyte stalkers had been carrying.

The conversation quickly returned to twice covered ground; what the purpose of our expedition. Ser Fosco, always the military man, wanted to set up camp close to the tower, dig trenches and set traps. I argued that our numbers wouldn’t support an assault, and that it would be best if we would continue to be a scouting party, like initially discussed. If the opportunity arose that we could take out the leader at the Lizard’s Tower, we would, but an all out assault was not something we were equipped for. I was actually quite surprised. Ser Fosco, for all his initial bluster, had always been relatively prudent and somewhat conservative.

Eventually we decided we would indeed scout out the tower with a small group, while the rest, under Ser Fosco’s leadership, guarded our descent from the Thar and made sure we could retreat up the Thar in safety, should the need arise.

The next morning I rearranged my prepared spells to accommodate the new plan. I cut about three yards of rope off the rope that I had taken so that I could summon a secret, dimensional pocket in which we could hide. While I was preparing for what was to come, Gunnar had been reading the signs and portents. He had a suspicion that perhaps the real battle would be on the Oldmark. He decided to come with us because his augury was inconclusive, but it was enough for Quentyn to demand I send Blackwing to warn Godric to raise the militia to a state of alertness.

When we were ready to depart, we caught up with Jago and Widukin, who had scouted ahead to the edge of the Thar and had found a good place to set up the ropes for our descent. They had spotted a barrow in the distance similar to the one we had found close to Glister. Midway through our preparations we noticed a trio of troglodytes slowly and openly approaching our position.

The smaller, female troglodyte, dressed in ragged robes, was noticeably smaller than the two brutes that flanked her. She held out her claws and spoke in a crude form of draconic. They had clearly observed our nightly skirmish and noticed that I spoke their language. They wanted to parlay. She introduced herself as Gal’nutha, a priestess of Laogzed. She explained that the group that had attacked our camp were also the ones that occupied the Lizard’s Tower. They were lead by another priestess by the name of Oxul’nitha, a follower of Sess’Inek. She also explained that Gal’nutha’s tribe was the erstwhile occupants of the tower, but were driven out by Oxul’nitha. They were rivals.

In our talks, through difficult, I did manage to understand more about the troglodytes than before. Loagzed and Sess’Inek were both minor deities, Abyssal princes with a small, but determined following. Semuanya was the major god of the troglodytes, who didn’t concern itself with either demon prince.

The outcasts offered us access to their tunnels, which would allow us to get up close to the tower without being seen. In return, they wanted a donkey. After some negotiations, they realised that we were offering them a much greater prize than a donkey; the death of Oxul’nitha. She agreed and lead us to the barrow. Gal’nutha explained that Oxul’nitha had arrived last winter and gathered all the tribes. Supposedly she was looking for something. Those tribes that wouldn’t submit fled onto the Thar.

Once at the barrow, about an hour from the edge of the Thar, we found that the group of outcasts were clusters of different troglodytes, all remnants from different tribes. We counted perhaps thirty armed warriors among them. We were lead to a tunnel which lead back to the edge of the Thar. We convinced Gal’nutha to draw us a map of the surroundings of the tower and she explained that we could recognise Oxul’nitha by the severed reptilian claw she wore around her a neck, a symbol of Sess’Inek.

At the end of the tunnel we found another troglodyte keeping watch. He reported to Gal’nutha that it was quiet at the tower and that many departed for the north-west, which happened to be towards Glister. In the exchange between Gal’nutha and the scout I noticed their language was more cruder than what she used to speak to me. It seemed as if she had been adopting a slightly more accommodating accent when we spoke. At that point it struck me again; this crude race had figured out how to work magic, fashion tools and clothing and build crude huts, but given another hundred years, they would not develop to the point where they could build a city, let alone something as intricate as the barrows on the Thar.

With some difficulty we got down from the Thar and stood on the embankment of the Shadowed Marshes which lead all along the edge of the Thar up to the Shadowed Lake that flanked one side of the Oldmark. I levitated myself up and used the evocation I learned from the scrolls we liberated from the High Pass keep to project a violent gust of wind against the wall of the Thar to propel me across the marsh. The others, unfortunately, had to swim across, but I arrived on the opposite side without having to get my clothing wet.

We made our way north, on Gal’nutha’s instruction, to a set of caves in the side of the hill the tower was situation upon. The cave itself was spacious enough for us to walk single file, with the occasional stalagmite to skirt or stalactite to dodge. It reminded me of the caves I explored with Laenore and Harlan around the Bray Valley and once again longed to be back there, pretending to be knights and war wizards. I wondered if Laenore had succeeded her wonderful father, Lord Mortimer, and whether Harlan was riding besides his legendary father, Ser Lorimer. I wondered about the library at Brayford Keep, and I was so caught up in my reverie that I only noticed that Quentyn and David were ensnared by large snakes when I bumped into the man who had been walking in front of me. Soon after, Jago got attacked by an even larger snake that managed to sneak up on us during the commotion.

Once the initial shock of the serpents wore off, we kept going through the meandering tunnel. We certainly had the feeling that we were ascending the hilltop from the inside and that we’d eventually emerge somewhere close to the tower.

We came upon a bend in the tunnel we were following and some of us could hear some sound from up ahead. It turned out to be a Sess’Inek priestess who was whispering to a very, very large snake. I could make out that she was bidding the snake to be patient, that the snake would feed soon. Was she waiting for us, or was she merely urging for patience until the next scheduled feeding? 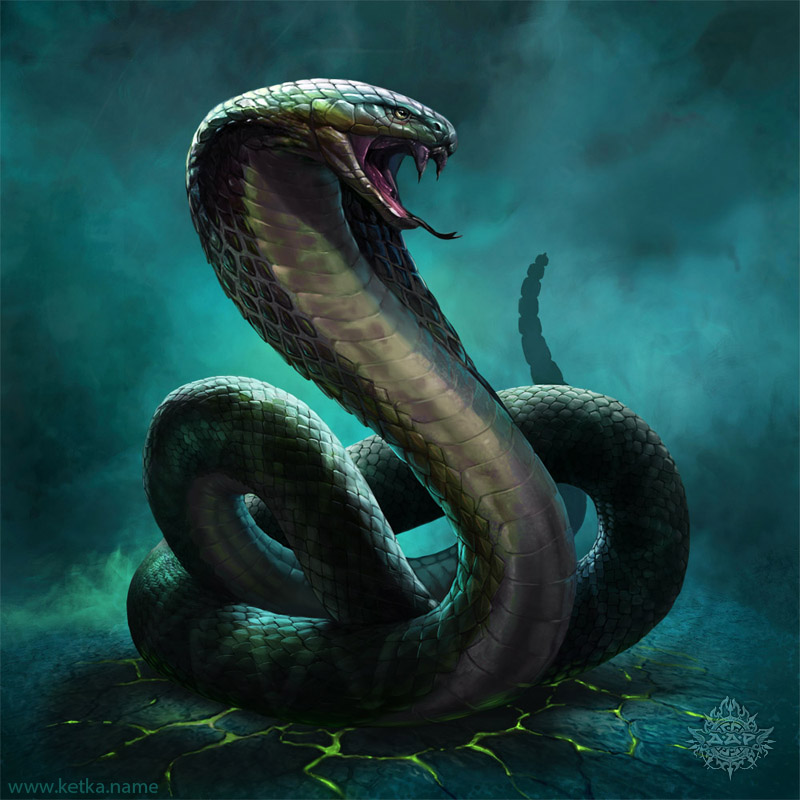 Was this Oxul’nitha? She clearly was a priestess, and she had the symbol of a dismembered troglodyte hand hanging from around her neck. We couldn’t be sure.

Regardless, Quentyn charged in with David close behind him and they were immediately engaged by the enormous snake. Despite us being able to catch the priestess and the snake unawares, they responded with astonishing clarity and speed. This only strengthened my suspicion that the priestess had been waiting for us.

While Quentyn and David were fighting with the snake, the priestess threw a stick carved in the shape of a stick directly at me. I recognised it as a summoning spell and I fired off a counter spell and the stick fell uselessly to the ground at my feet.

The snake started to constrict Quentyn, which gave David the opportunity to pass the coiling mass of the snake and charge at the priestess. He bull-rushed her to the ground and struggled to get her under control. Gunnar ran up to the snake while it was preoccupied by Quentyn and instantly killed it. Immediately after the snake died, the priestess secreted that awful mist from her neck glands.

I retrieved the pot of ointment we had made in Glister and started going around everyone who was immediately engaged in the fight to rub a dollop of ointment underneath their noses to protect them. Luckily, only Gunnar seemed to be affected by the horrible stench; Quentyn and David were made of stronger stuff. I made a mental note to keep the pot of ointment on my belt so that we could apply it before rather than during a skirmish against the troglodytes.

In the meantime the priestess continued to struggle and kept trying to bite at David’s face. She even tried to appeal to Sess’Inek in prayer. I tried to reason with her, telling that if she wanted to continue Sess’Inek in this realm, instead of being devoured by Laogzed in the next one, she should calm herself. Unfortunately, I wasn’t able to get through to her. Eventually, she managed to break free and started running. Again, she was remarkably fleet-footed, but luckily Quentyn ran her down and killed her.

She was clothed in hide and bone armour, and only had a holy symbol and a few trinkets and sticks on her, which made me doubt that this was Oxul’nitha, the feared priestess warlord.

David used the healing power of Ilmater to get Quentyn back on his feet and we decided to continue moving.