After the fight with the priestess, I took a moment to look around for any items the priest might have left behind. I found the crudely carved snake figurine that the shaman threw at me. I decided to keep it with me, perhaps I could use it to intimidate one of the simpler troglodytes in the future.

It had occurred to me that the enormous snake that Quentyn, David and eventually Gunnar, killed, would likely have to have eaten at least one adult troglodyte each day in order to attain and maintain that size. I guess we know what happens to all the troglodytes who refuse to submit to Oxul’nitha or bow to Sess’Inek.

Further down the tunnel we found a wall with small hand and foot holds. Quentyn couldn’t manage to climb up due to the slimy and wet stone. So Jago climbed up first and I followed him, carrying my rope on my back. We lowered the rope and Jago could lift items back up while I made some light.

Finally, everyone climbed up along the wall, with the exception of Quentyn. At that point we heard a slithering. I asked Jago to light another torch, while I summoned an unseen servant to carry the torch to the next corner of the tunnel. At least we might have some advance notice in case something came slithering down the tunnel.

And something did; first two, and later two more snakes appeared. These were not as big as the previous snakes. And these were not constrictors, these were vipers. I called out to the others and Jago immediately called upon his patron to summon forth a rat the size of a small dog. I traded places with David and then with Quentyn, leaving space for them to engage the vipers.

We got closer to the exit of the cave and we got a hint of the troglodyte excretion. We all used some of the ointment we had made before we rushed out.

We exited through a thick curtain of roots and bushes and we emerged on the lowest level inside the tower. The tower was in a sorry state; the entire interior had collapsed in on itself and most of the walls had jaggedly collapsed all around. The ground was littered with stones, brambles and weeds, as well as shards of flint, crude pottery and lots of bones. A ruined, once arched entrance on one side of the tower had long since lost its keystone and had since started to lose stones overhead. Despite that, the entry was clear and often used.

Opposite of the entrance, at the back wall of the tower, was a large block of stone, adorned with dismembered troglodyte hands and crude writing in dark blood. It was clearly an altar, once to Laogzed, but now defaced with praise and iconography of Sess’Inek.

Walking around the bottom one could hear crunching of small bones underfoot.

The tower’s radius was about five yards. I carefully made my way to the offering stone to investigate the writing on it. My footsteps made crunching noises as I crushed small bones, brittle twigs and shards of stones underfoot. Jago went to take a look outside the tower, and quickly found a battle scene, littered with many bodies of troglodytes, a few gnolls, and even an ogre or two. Quentyn could make out from the wounds that the fight had been between the troglodytes and gnolls, with the ogres likely fighting alongside the gnolls, like we had seen at cairned camp on the way back from the High Pass Keep.

The crude draconic writing on the offering stone were made by someone who clearly didn’t understand what they were writing. The eldest ones were offerings to Laogzed, while the newer ones were dedicated to Sess’Inek. On the alter there was a golden coin, covered in blood, surrounded by dismembered troglodyte hands.

David took out the suntoken and compared it to the gold coin, it being roughly the same size. I called the unseen servant to clean the coin in order for us to examine it more closely. David decided to pick up the coin, and just as I wanted to warn him not to do so, I started to notice the mist coming up from the inside of the broken, tower walls. There was a sudden blast of air that threw me backwards. As I scrambled back up, a dozen strange figures emerged from the mud. Two of them lunged at me, and I didn’t know what to do, so I levitated myself up, away and out of danger.

When I looked down, I saw what these things were; dretches, the foot soldiers of the tanar’ri. Cowardly creatures who overwhelm with numbers, and could summon other demons. I was confused as to what they were doing here. The two below me seemed to be mindlessly trying to grab for me, but one of them stopped and summoned another, which appeared from the ground.

I kept out of range and cast a burning hands on them, which didn’t really seem to do that much damage. The rest were faring quite well against the dretches. I decided to levitate myself upward and out of the tower to take a better look at the situation around the tower. The dretches who I had ignited seemed to have fled the battlefield. 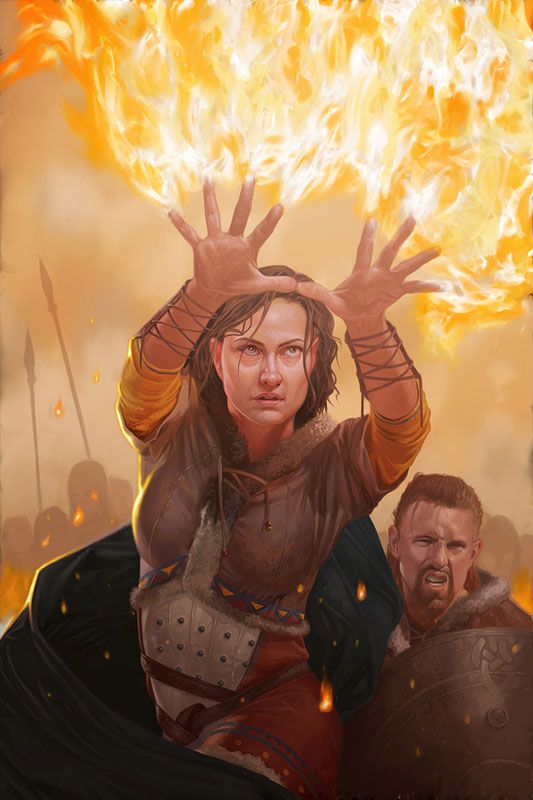 I came up from the tower and saw the Thar, the barrows, the construction that Ser Fosco had built on the edge of the Thar, the forests and the clearing of the Oldmark, and the trail to Hulburg. Unfortunately, I didn’t see any trace of the ones that had attacked the tower

I heard David yell down below and saw him use the gold coin, held it out before him, and rebuke the Dretches. Five of the Dretches exploded in rancid, muddy chunks. Unbelievable. It was an incredibly risky move to use the coin without him knowing exactly what it was, but it seemed to have paid off, because otherwise he would have been overwhelmed.

What are these lower abyssal creatures doing showing up here? While the others were killing off the dretches, I took another look to see if I could find the other camp on the hillock close to the tower. I saw the area where the camp was supposed to be and saw the forest had thinned out, probably because of logging. It was too dark and the forest was too thick for me to make out anything else.

When I came down the situation seemed well under control. Quentyn asked what the creatures were, and I told him that they were lesser demons. Sess’Inek is a greater tanar’ri, which would explain the presence of the dretches.

Sess’Inek, Nar-Narg-Naroth, Yeenoghu, these are all tanar’ri. Zenghi obeyed Orcus, the demon prince of undead. Am I just making connections because my mind yearns for there to be a pattern, or is there really something there?

The carcasses were cleared from the courtyard and we used them to close the entrance to the caverns underneath the tower. We set up camp between the tower and the outside wall. It was defensible, sheltered from the elements and relatively clear of the stench of the bodies. Later Jago would start a large fire with some moist branches thrown in for good measure; the smoke from the fire would mask the stench from the bodies. He’s so clever.

Blackwing returned in the early evening and said that she was well-fed by Mund and said she was in touch with Godric, whom she called “dog throat”.

Gal’nutha approached with her two bodyguards and asked how long we would stay. Quentyn wanted them to know that we were going to stay until the morning, but that the tower was his possession. I advised him against it, cautioning that we would have to think about our safety and the safety of Ser Fosco on the Thar.

Gal’nutha asked to take some of the bodies. She went into the tower and spent another hour consecrating the altar, removing the Sess’Inek paraphernalia and painting a toad on it with the blood of one of the troglodytes. She took two gnoll bodies and departed for the Thar.