The adventurers found themselves on the bank of the underground pond that served as the source of the well on the Sheridan estate in Lynnecombe, Northshire. They take in the size of the space, find a small, wooden boat moored to a stalagmite at the water’s edge, with some stone-working tools on the bottom of it. Having only one direction to head in, they set off into the tunnel which holds the dried up aqueduct. The group had two hooded lanterns to guide them, so James, gifted with the elven sight that he inherited from his mother, decided to scout ahead of the rest of the group, outside of the range of the light.

An hour into their journey up the aqueduct James stumbled upon the body which turned out to be that of one of the Sheridan house guards. The man turned out still to be alive but on death’s door, afflicted by a strange disease causing purple swelling on his neck as well as pus-filled blisters around his mouth, eyes and nostrils. Dark brown and red stains covered parts of the man’s clothing. When it became clear that the man would not be saved, Astrid suggested offering him a merciful death. Emma decided to do the deed, taking Astrid’s dagger and after a short prayer to Sedna, slipped the dagger into the man’s heart, just below the third rib.

The blood that seeped from the wound was dark, thick and viscous. Luca was fascinated by the blood and was assisted by James in harvesting some of the blood and storing it in a flask of oil, after having discarded the oil.

Immediately after putting the man to rest, Luca suggested burning the body. A discussion arose on what would happen when burning the body. The smoke build-up and the light, it was deemed, would attract too much attention, so the body was taken out of the aqueduct so that it wouldn’t spoil the water supply if the adventurers were able to restore the flow. They would have to take care of the body on the way back.

Continuing further into the aqueduct’s tunnel for another fraction of an hour the adventurers started hearing the sounds of water. Quickly afterwards they came upon the reason for the aqueduct having dried up; a partial collapse of the tunnel behind which the water had been pooling. After some investigation, it seemed that something with sharp claws had burrowed its way into the tunnel from the south. The water which had been pooling on the other side of the rubble had now been pouring into the new tunnel.

Several  more stone-working tools were found around the rubble, presumably left behind by the dwarven engineers sent into the aqueduct to resolve the blockage. Among the tools were three ceramic jugs sealed off by wax. Shaking the jugs it seemed to be filled with sand. Luca opened one of the jugs and was confronted with fine, yellow, oily powder which had a distinct smell of rotten eggs. He resealed the jug and left it with the rest of the tools. Emma found a rope among the tools and used it to create an easy way to scale the rubble. She also took a hammer and chisel.

After scaling the rubble and emerging on the other side, the adventurers decided not to continue down the tunnel of the aqueduct, instead turning south into the newly created tunnel. It didn’t take long before stumbling upon another one of the missing guards, this one dead, expired from more than a dozen stab-wounds, most of which seemed to have been made by crude, jagged weapons. Upon more careful inspection bite marks could be found. Luca noticed that the marks seemed to have been left by an animal, like an oversized rodent.

A short time later the newly created tunnel ended as it emerged into an high vaulted tunnel system. The masonry seemed ancient and covered with greenish, bio-luminescent moss. There was something familiar about the tunnel to both James who was reminded of the waterways underneath Kingsport. Emma later thought of the Sacred Baths of Sedna in Kingsport, whose masonry also held strong similarities to the tunnel the adventurers now stood in.

Emrys took it upon himself to flip a coin and let Lady Tymora decide which direction to take. Left. Luca suggested that if they were going left, they would have to keep going left at each junction. James once again took point, and Emma marked each corner with the hammer and chisel that she took from the blockage in the aqueduct.

James’ keen ears finally picked up some noise that he identified as rodents up ahead. What the adventurers found was a mischief of rats who had been feasting on what looked like a body. Once the rats noticed the adventurers they quickly flooded towards them in a frenzy. Emrys collected several pinches of multi-coloured sand in his hand, blew it in the direction of the rats and a burst of multi-coloured lights shot forth and washed over the rats, leaving many of them momentarily stunned.

Luca’s quarterstaff emitted several dark purple beams of dangerous energy, killing several rats. While Emma and Emrys combined their talents to create an illusion of large hound dog to scare the rats off, James used another flask of oil in the middle of the mischief and threw down a lantern to ignite the vermin. The rats that survived seemed to recoil from the fire in fear and departed the scene in a scurry.

The body was that of a dwarf, bald of head and bearded by a dark, anvil beard. His hands appeared bound behind his back, with leather straps that had cut deeply into his skin. There was no clear reason for his death, with the exception of the carnage the mischief of rats had left behind on his body.

A little further down the tunnel the adventurers once again were alerted to the sounds of movement. Emma and Astrid decided to head up front while James took up the rear, with Luca and Emrys being protected from both ends. The tunnel emerged into a large chamber, vaulted by two rows of support pillars. The chamber was large enough for the opposite end to be shrouded in darkness. 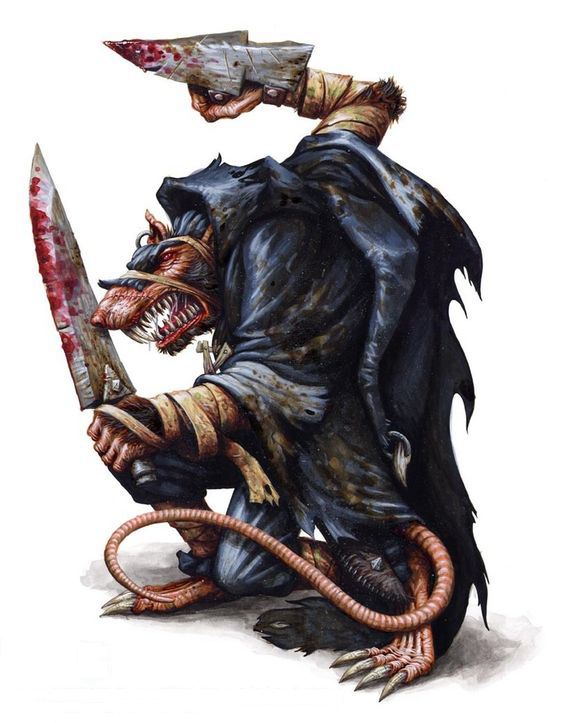 From that darkness emerged the dark shapes of several bipedal rat-creatures, clothed in ragged clothing of leather and hide. They carried jagged looking shortswords and daggers. Their fur was mottled brown, grey and black and their eyes glowed with an intense and menacing hatred. Behind the blade wielding rat-men followed a white, albino rat-man, wearing dirty grey robes and carrying a large, wicked looking scythe

There was no doubt in the minds of the adventurers; these creatures would not parlay, so the fight was on. Astrid charged forward, spear in hand, while Emrys brought forth an illusionary image of one of the Sheridan house guards. James drew his bow and fired an arrow in the direction of the albino, but missed. Luca brought forth the same dark purple bolts of angry energy which he had hurled from the tip of his quarterstaff before.

The albino raised its scythe in the direction of the illusion and snuffed it out. Astrid was being ganged up on and attacked several times. Emma called upon the powers of Lady Sedna and sent a bolt of radiant green energy towards the scythe-wielding albino, marking him for easier targeting. James made eager use of it and found a home for one of his arrows. Emrys positioned himself so that he could once again emit the burst of multi-coloured lights that stunned two of the blade wielding rat-men.

The albino decided to retreat back into the darkness and left the blade-wielders to guard its retreat. Several other blade-wielders emerged from the shadows and fell upon Astrid. James shot forth and tried to set off in pursuit, but could not catch up with the nimble rat-man. It took a few moments longer before the rest of the rat-men had been dispatched. When quiet and calm once again returned, Emma ministered to Astrid’s wounds by calling upon Sedna for healing.