Previously, the adventurers learned about the history of the venomous dagger; a green dragon by the name of Kalauranthalasis was enslaved by a priest of the dark queen named Melchior who harvested its body to fashion the dagger and many like it to carry out assassinations of seemingly random people in name of the Takhisis. The adventurers also managed to catch a boat ride upriver with an elf named Kedelon, a friendly and simple fellow from Allenham, who was also travelling with Rickard and Willow. The journey to Allenham was quiet and pleasant, taking about a day and a half before arrive at a small pier just south of town.

After disembarking and saying goodbye to Rickard and Willow the adventurers walked towards Allenham with Kedelon. They came upon an old, gnarled hanging tree in which six non-human bodies were strung up and a message of racial bigotry against non-humans underlined the motive of the hanging. In town it appeared that tension between humans and non-humans were running high due to a capricious magistrate and a decade old feud involving Kedelon’s family and the Allen family, the influential founding family of the town.

The adventurers departed the magistrate’s building, leaving Strickland to stew in the mess that he had made. They were interested in getting the perspective of some of the other notables in town in order to get a complete picture of the situation. They decided to continue the ruse that Luca was a mage sent down as a royal envoy to investigate the Procyon activity in the area. Their first stop was Syndarael’s cottage, where they once again met up with Emrys, who was still sitting outside with Toruviel across his lap, enjoying the sunshine filtering through the leaves in the trees.

Everyone who had not been introduced got introduced to Syldarael’s family and her halfling friend Tiff, who was helping out and providing everyone with a nice cup of restorative herbal tea. In the meantime a conversation was had between Emrys, Luca and Syldarael. The rest remained outside so as not to crowd the little cottage too much.

It was revealed that Allenham was founded about one hundred and fifty years ago by the Allen family. Syldarael was part of a local elven community and the two communities were joined when a blight went through the area, leaving the elves unable to hunt or forage for food. The Allen family bartered food for labour and soon the elves and humans were living side by side.

It was also revealed that Allenham and its environs were part of the crownlands, owned by House Valois and governed by magistrates. Rickard and Willow lived close to Allenham but were from a neighbouring estate owned by House Hardwin of the Cloisterwoods. Emrys was familiar with the Cloisterwoods and House Hardwin, since they were both neighbours of House Blackwell of the Cloakwoods, with whom had had history.

Another thing the adventurers learned was that Strickland had only been magistrate for a few years. He took over after shadowing the previous magistrate, a man by the name of Crossley who had spent thirty-five years developing the area of Allenham, for over a year before Corssley retired from his position and went to live somewhere in Fulham.

It appeared that Syldarael’s main goal was to make the violence stop, either by strong punitive action towards the perpetrators, or by diffusing the situation by calling off the wedding. She’d rather see punishment of those who are transgressing the queen’s laws, but is willing to sacrifice her daughter’s happiness if there is no other option. She made sure to let the adventurers know only when her daughter was preoccupied.

After the adventurers departed Syldarael’s home, they talked amongst themselves about possible solutions. When the idea was raised of just continuing to Pinefall and leaving the situation in Allenham to be dealt with the Allenhammers, Emrys said that he could not allow that. Emma pledged her support, while James and Luca pledged their support grudgingly. Astrid had no strong opinion either way.

Several options were discussed and the idea of finding a suitable replacement for magistrate Strickland seemed to be a strong favourite. It was decided to go to the Allen family to see if it was possible to talk to Herman Allen. When they found him receptive to a conversation the adventurers continued their ruse of Luca being an envoy for the crown. Herman lead the adventurers to a shaded area to one side of the main building of his large farm.

Some cold milk was served for Herman and each of the adventurers. Once again, James made an effort to be rude by rejecting the offer of hospitality. He was as eager to rub the Allen family the wrong way as he was eager to show disdain for Syldarael’s family.

Under the guise of investigating the Procyon activity Luca asked Herman where he thought the violence in Allenham originated from. He claimed that the former engagement between the magistrate and his daughter Martha was water under the bridge, but that he felt that Strickland had shown favouritism towards the non-humans in allocating new farmland to them. He held no bias towards the elder races or other non-humans, and pointed at the large number of them in his employ as evidence. He rejected the idea that he had any responsibility for the violence that had occurred, including the hanging.

The conversation came to an end and the adventurers departed. They wanted to speak to Falibor, the town’s smith, and get his opinion on matters. But before they managed to find the dwarf, they stumbled upon a large group of humans violently dragging a family of halflings from their home. 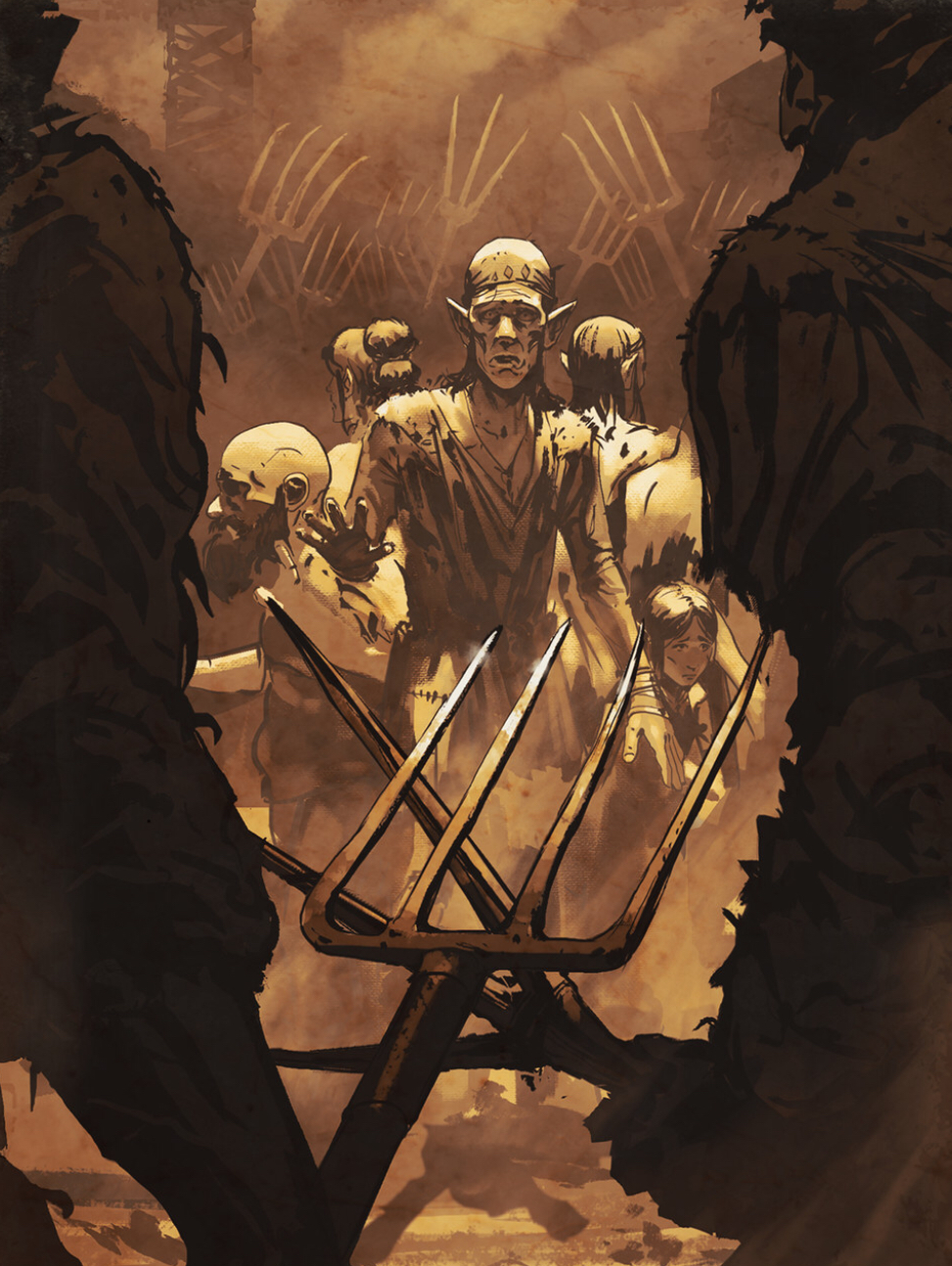 Emma tried to bring the mob to a halt through divine intervention, but their anger and frenzy was complete. Astrid and Emrys advanced on the mob with their weapons drawn, and Emrys used his magic to enlarge the both of them until they were the size of an ogre, towering over the mob. This caught the angry mob’s attention, and in the confusion James, who had circled around the building to flank the mob.

During his flanking manoeuvre, James had noticed a small group of figures emerging from the tree line behind the houses and hastily climb up on the roof. They were well camouflaged, nimble and silent and James held up his hand in greeting. Seconds later the group started firing arrow after arrow from sleek longbows into the mob of humans.

In that confusion, James acted. He managed to extricated the halflings from their predicament. He told them to make their way towards the trees and onward to Syldarael’s cottage.

Luca fired searing bolts of fire and purple force at the sharpshooters, partially igniting the roof. Emrys magically raised the fury of the flames that Luca caused, and finally, Emma thundered a tidal wave on their position, dousing the flames and sending the sharpshooters in retreat.

The final tally was that nine people were shot down in a matter of seconds, only one of which could be saved by Emma, a young woman by the name of Tomira. Martha was held back and made to sit on the ground, among the dead, watched over by Astrid, while Strickland was called to the scene. Astrid had to step in when Luca started to harass Martha, trying to get her to take responsibility for the violence. Tomira asked to depart and was allowed to do so after a stern lecture from Emma.

Strickland arrived with two guards and started arranging for a cart to pick up the dead. while Luca has redirected his harassment from Martha to Strickland. The adventurers forced him to agree to hosting a meeting with certain notable people in town, in order to settle the differences and put an end to the violence.