Previously, the adventurers settled the conflict between the Allenham townsfolk and were asked by the magistrate to take care of the Procyon threat that was still lingering in the dense forests around town. They found and engaged a large group of Procyon scouts, lead by mage. The fight was stiff, but the Procyon eventually retreated. The adventurers pursued the retreating elves into the ruins, hoping to strike a crushing blow. Unfortunately, they were lured into an ambush and it was their time to retreat. The elves did not pursue. Instead, when the adventurers returned to Allenham, they found that the Procyon had attacked the Allenhouse, killed the guards and murdered the magistrate.

(Silvermoon in low sanction. Bloodmoon is waxing. Darkmoon is waning.)

While all of the Allenhammers were vast asleep, their doors locked and bolted, trying to process the events of the last several days, Emrys and James had decided to patrol the streets of the town in case the Procyon returned. Emrys stayed in the centre of town while James patrolled the outskirts. Boredom soon struck Emrys, so he sat himself opposite the Allenhouse and started playing a tune on his lute.

Luca was asleep in a room in the Allenhouse, getting assaulted in his dreams by flashing images of all the knowledge that his master had poured into his head on the eve of his departure from Kingsport. At midnight, he awoke with a fright. The images of his dreams were fleeting, but he was left with some flashes of recall; of a person stumbling through the a dark wood, awash in purple light, of a bloodied hand, and finally of a dormant cottage and the smell of lavender in the air. He felt a throb coming from Blackstar standing in the corner of the room he was in, and a dark voice resonated in his head; “Consume. Consume. Consume! Consume!!”

Clumsily trying to sneak out of the Allenhouse, Luca bumped into Emrys outside. He noticed the only two moons in the sky were the bloodmoon and the darkmoon, casting all of own in an eerie, purple light. Exchanging a few words with Emrys about not being able to sleep, and Emrys went back inside the Allenhouse to catch some sleep, while Luca walked over to Syldarael’s cottage. James, who had been honing his skills in rural stealth had long since noticed Luca and decided to follow him.

When Luca approached Syldarael’s cottage, a figure darted from her herb garden and dashed into the woods. Luca went to inspect the garden when James walked up next to him. They concluded that the person who had been in Syldarael’s garden had likely collapsed there, but had not made it to the front door.

The two decided to see if they could follow the trail the person left behind and eventually found a wounded Procyon scout hiding in a hollow created by two conjoined trees. They saw that the elf was grievously wounded from a wound to the belly. A gash was bubbling dark brown blood and they both concluded he was not long for this world. James tried to comfort him and asked him if he wanted to have a message passed along. The elf reached inside his cloak and retrieved a piece of folded parchment, dipped in wax to make it water resistant. Using the light of the flames Luca had produced in his hand, they read the letter:

While observing the Allenham townsfolk as they go about plundering and devouring the forest, I have noticed a human woman who stands out to me. She is the daughter of a notable and has been touched by… something. It is neither fey nor shadow, neither radiant nor dark. She is under the influence of someone, or something. I suspect that the disappearance of Lady Sehanine is weakening the bond between the woman and whatever it is that’s manipulating her. The evening after tomorrow, when Sehanine is fully obscured, is when the bond, and whatever is causing it, is at its weakest. I know it is not in your nature to help out the humans, but we must act. That is why I send this scout, Kalindras Duskstrider, to bring you this message.

Forever in your debt,

When the adventurers had read the letter, Luca took hold of Blackstar and summoned an eldritch bolt of energy which robbed Kalindras of what was left of his life. Luca felt a jolt of pain and again the dark voice resonated in his head, letting out a satisfied sigh. James, who already had some reservations about the weapons the adventurers had found near the portal in the catacombs underneath Lynnecombe, decided not to bring it up. Instead, he suggested going back to Syldarael and asking her to take care of the body for them, while they investigated the contents of the letter. Syldarael, startled and confused at their request, decided not to ask too many questions.

The adventurers thought that the most likely “daughter of a notable” would be Martha, so they decided to head to the Allen farm first to check in on her. First, however, they decided to drop the letter they had found off at the Allenhouse for their companions to find once they woke up, just in case something happened to them during the night, they would at least have a lead to follow.

After dropping the letter off on Emrys’ chest, who was asleep in one of the common rooms downstairs of the Allenhouse, Luca and James headed to the Allen farm. They spoke about the three moons and the full eclipse of the Silvermoon, which they figured was also referred to in Valadar Amberwind’s letter. Luca told James that the position of the moons had an effect on the ebb and flow of magic, and James said that it also had effect on people.

The streets of Kingsport are even more empty on a night as tonight. Even the guards stay inside.

When the duo approached the farm they noticed that all was quiet. They decided to approach the house through the fields, in case the farm had guards out. They spoke quietly about the Arms of the Senhadrim, about their effects, and about how James didn’t trust their influence. He claimed that he had seen Emrys be controlled by Toruviel. When they came to the house, they decided to approach it along the side, near the garden where they had their parlay with Herman not so long ago.

If we don’t have to, let’s not kill anyone.

They found a window on the ground floor which had its shutters locked. Luca used Blackstar to detect the presence of people. He noticed a few, but none of them behind the window. James took out a leather satchel lined with a bunch of curious tools which he unfurled and used several of these tools to unlock the shutters. Both of them climbed into a hallway. They verified the presence of one of the people that Luca had noticed using Blackstar, and found that Herman was asleep in a study, laying on a sofa with a book on his chest. They proceeded down the hall.

After quietly searching the house, they managed to make their way upstairs, finding Martha’s room. She had one part of the house all to herself, but her door was locked. Again, James produced his satchel and opened the door in no time. The room was candle lit and they could see Martha in a state of half undress, laying on a large, four poster bed. She seemed to be moaning and touching herself, while a curious, red vapour undulated above her. Luca decided to hex the vapour and it responded immediately by rising up, coiling up like a snake and bursting through the shutters and out of the window, retreating towards the woods.

Checking on Martha only to find her semi-conscious and not lucid, they decided to bind her hands and gag her, just in case. Then they gave chase, using growth of old Lyrian ivy vines along side of the building to climb out of Martha’s room. As they did so, it became clear that Martha had often used the vines to sneak out of her room. The strange vapour had left a trail which was easily followed as the two ran into the woods. Eventually the vapour trail lead to a small grove, lined with bindweed, which Luca knew was rumoured to thin the fabric between realities.

Near the back of the grove, they found the start of a path leading down into a small crag. The further the two went down the crag, the more decorations could be found. There were primitive, isometric shapes carved into the rock; spirals, triangles, stars and circles. Also, they found stick figured made from vines and sticks hanging off of the branches and roots from the trees above, as the two descended down deeper into the crag.

At the end of the crag they found a cave in which sat a stunningly beautiful woman, with fiery red hair and an alluring and revealing dress, laying on a bed of furs. She spoke to Luca and James, introducing herself as Liliana and trying to get them to come closer and spend some time with her. Both of them were simultaneously attracted to her and repulsed by her. They knew something dreadful was about to happen, but they also couldn’t deny their attraction to her. They also noticed that the entrance they had come through had disappeared, effectively locking them inside the cave with Liliana. They kept resisting her calls, until finally she became angry. 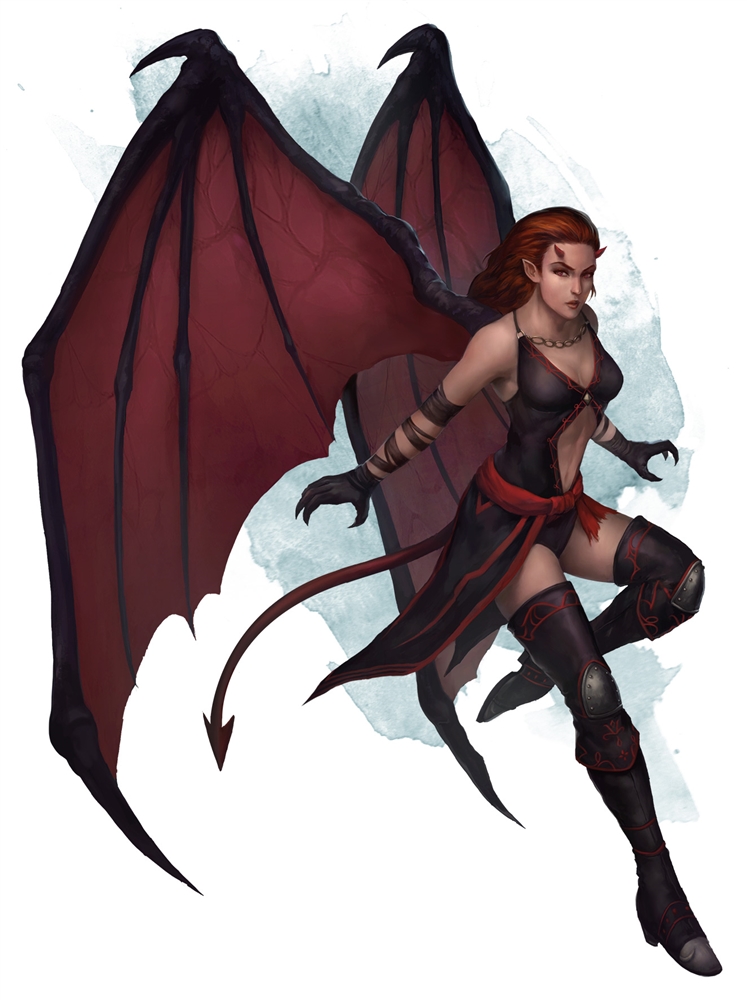 The fight was very confusing. Liliana showed her true form by sprouting a pair of large, leathery bat-wings from her back, growing a set of curved horns from her forehead and displaying vicious, claw-like hands. She summoned small, vicious fiends that kept on attacking and poisoning the duo.

The strangest was that during the fight, she would occasionally use her powers to transport one of the adventurers to a strange, alternate reality where the cave was made from pulsing flesh and they had to defeat two of the small, vicious fiends in order to return. While banished, the remaining person would have to withstand Liliana’s preternatural charm.

Due to Luca’s strong mind and James’ elven lineage, Liliana was not able to seduce them the way she wanted to. She managed to entrance James for a moment. She kissed him, draining him of much of his life force and then ordered him to attack Luca, but he was able to shake off the effects of her charm. It was touch and go for a while, but they managed to defeat her and the fiends she summoned. As she dissipated in a vapour with a screech, Liliana’s voice entered the adventurer’s minds with an ominous message:

Until we see each other again, boys…

The luscious furs dried and turned to dust and the remaining fiends shrivelled to nothingness. The entrance to the cave also reappeared. When the adventurers stopped trembling and regained their breath and bearing, they rummaged through the remains in the cave to find a couple of tourmaline stones, a curious potion in a ceramic, green bottle and a strange, dreadful looking flute. 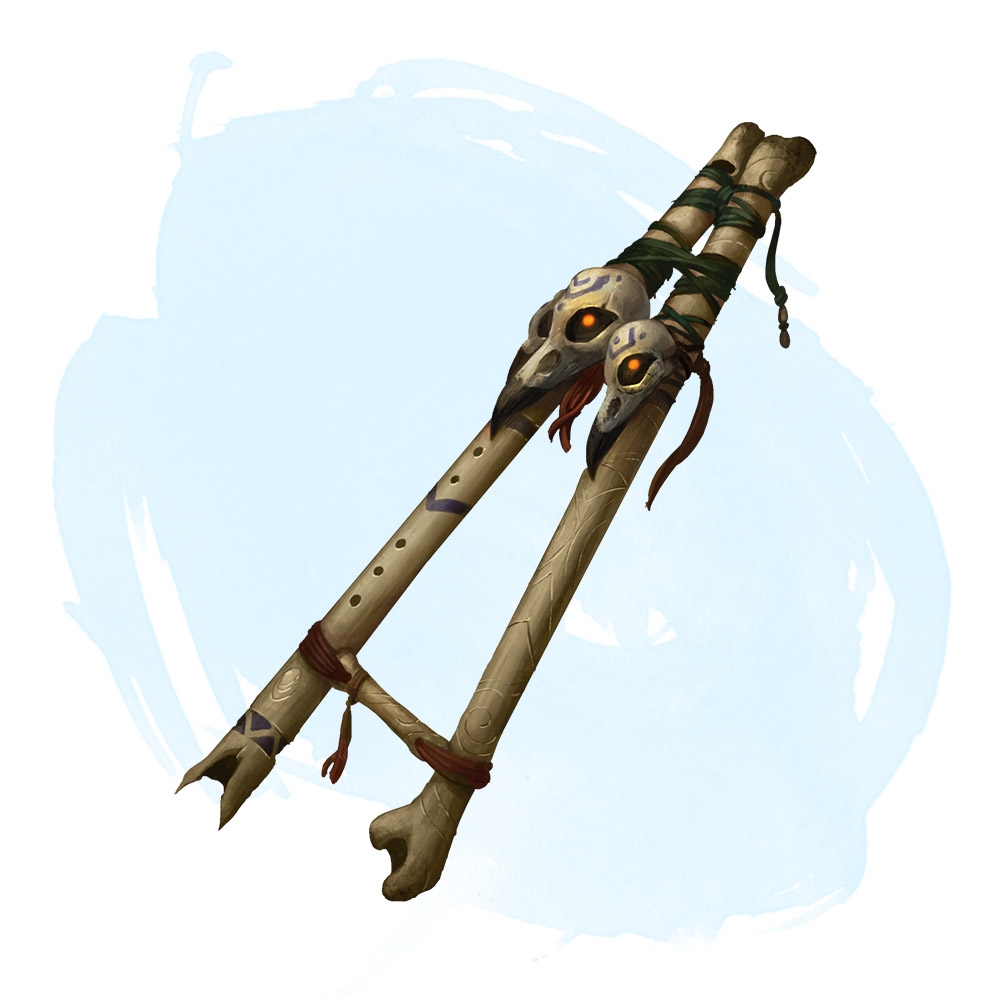