Previously, our heroes managed to infiltrate the Crimson Tower and confront Atilesceon and his disciples. The battle was hard fought and some of the company got stuck on a lower floor, which Atilesceon had flooded with a noxious cloud, killing them all. Eventually, the rest of the company brought Atilesceon down. The vengeful spirits of the doomed crusaders rose up from the tower to tear through his body and whisk him out and over the balcony railing into the lake beyond.

When quiet returned to Atilesceon’s laboratory, the heroes were overwhelmed with exhaustion. They all found place to rest, their bodies trembling from exertion and the adrenaline crash. They began to take stock of their situation and wonder what was going to be next. They didn’t know what to expect, but the emptiness that followed felt strange. Everyone dealt with it in their own way.

James went to investigate the bedroom below, to see what what could be salvaged from the bodies of Hejduk, Gorden, brother Connal and Ser Fulton. He took some of the ointments and poultices that brother Connal had on him, and took his symbol of Pholtus. He gave the healing equipment to Emma and kept the symbol for personal reasons. He then went back up to search through the laboratory for valuables.

Astrid started pacing around once she felt better, a nervous energy coming over her, and a dark look in her golden eyes. Eventually, she made her way onto the balcony to balance dangerously on the railing, holding her arms out wide like an eagle as she walked along the railing.

When Emrys felt a little better he felt like the tower should hold more of Atilesceon’s personal writings. The heroes had found some when they had first entered the tower, and he was hopeful to find more. He searched the laboratory but couldn’t find any writing that didn’t cover forging, engineering and metallurgy.

Quentin, not interested in scavenging the tower for valuables, went down to the bedroom together with Emma to take care of the bodies of the fallen. He cleaned the bodies and covered them with the sheets from Atilesceon’s bed. He took the shield of Ser Fulton, a kite shield with a wreath of three, green snakes on a white field.

Luca, interested in finding Atilesceon’s grimoire, performed a ritual that allowed him to detect the magical nature of things. What he found was somewhat disappointing; there were no major things that were left undiscovered. He found that the strange scarab-like devices that were attached to the necks of Atilesceon’s disciples were magical, and that the shield that Quentin had found was also magical in nature.

Everyone started making their way down into the study, hoping to find more of Atilesceon’s writing. They found the journal pages that they had read when the first entered the tower, finding some new ones, but nothing new or shocking. The conversation turned to what to do next. They were followed by an invisible Sadwick, who praised them for defeating Atilesceon, but peppered them with barbed comments.

A quick look up in the portal room revealed that the marble archway that they used to enter Old Llygad was dormant, cracked and broken from when Emrys passed through it, disrupting its magic.

Slowly the heroes started to realise that they would have to leave Old Llygad using the Ritual of Returning, which carried a heavy price, especially if they wanted to rescue the crusaders as well. When would they leave? How would they find enough sacrifices? For every ten people returning, one person would have to volunteer as a sacrifice.

The heroes decided to depart the tower, taking the bodies of the fallen with them, leaving Sadwick behind. Emma once again called upon the blessings of the protector of streams to allow them to tread on water and carry the fallen to shore where they met up with several priests of Pholtus who were cremating the last of the crusaders who had fallen in battle. The priests let the heroes use their carts to transport the fallen back to the camp.

Once there, Emrys held a speech in front of the entire camp, heralding the defeat of Atilesceon and calling for preparations to be made for the departure. He would inform the camp the following morning about what would need to happen for their departure to be a success.

Inside the commander’s tent a conversation was held with a close knit group of people about how to prepare the crusaders for the news that their departure would come with a heavy price. The choice was made to rip the bandage off fast and cleanly and not let the crusaders remain in doubt for longer than necessary. Emrys had a difficult task ahead of him convincing one person for every ten to sacrifice themselves.

To everyone’s surprise, Ser Estienne stepped forward and willingly submitted himself to be one of the people to be sacrificed. Quentin, especially, was shocked at the statement made by the legendary knight, but Ser Estienne seemed steadfast.

When Quentin took him aside to talk to him, Estienne explained that he knew that he would not survive the departure from Old Llygad. He had made a pact with the Fleur, the Sword of Flowers, long ago; he would borrow part of her essence to maintain his sanity. Now that the crusaders were saved it was a debt that he would soon have to make good on. Quentin, perhaps not realising just how literal Estienne was being, tried to convince him that there was a future for him, but instead Estienne told him to kneel. Estienne took Fleur and spoke the ancient words and knighted Quentin. He then gifted Fleur to Quentin, fulfilling the young knight’s long held goal.

The following morning there was a gathering of knights outside of the commander’s tent. Several armsmen and civilians who had gotten wind of the announcement that Emrys was going to make to the knights had also joined, albeit at a distance. Emrys explained the situation and explained the sacrifice that would have to be made. He also explained that the sacrifice would have to be completely voluntary; one last toll that Old Llygad was to exact from the crusaders. One knight stepped forward, willing to put his life down so that his squire and armsmen may depart from Old Llygad. It became clear to Emrys that he would have to address the civilians as well, and so he did. He gave everyone until the end of the day to decide whether or not they would want to be a voluntary sacrifice for the others.

At the end of the day enough people presented themselves. One of the animal handlers was willing to sacrifice himself so that the griffons may be transported away from Old Llygad, too. Emrys organised for a ceremony, to commemorate the men and women who would lay down their lives.

During this time, Emma and Luca went to round up all of the priests in order to go over the ritual together, making sure that all of them would be able and willing to perform the ritual, including the sacrifice, come morning.

The following morning, Emma and the priests lead the volunteers in prayers, blessing them for their service, while Ser Kadagar Ashbeard and his armsmen chiselled their names into the standing stone on the edge of the woods into which they’ve been chronicling all of their knowledge.

The crusaders gathered up their belongings, at least all of that which they could carry, and a long procession was held towards the lake, and south along the shores, passing by the Crimson Tower one last time. The entire crusade made their way to Isobel’s Vale and there the first group, consisting of James, Quentin, Astrid, Ser Edric the Strong and Estienne’s retinue, stepped into the shallow end of the pond to perform the ritual. Estienne was the sacrifice while Luca performed the ritual.

In the meantime, other groups gathered around along the edge of the pond as well. For each group, the experience was much the same. The water at their feet started to radiate with scintillating colours, while butterflies, dragonflies and fireflies started to buzz around. The lights became brighter and brighter, so much as to overwhelm the senses. When it finally died down again, each group found themselves standing at the edge of a pond in a vibrant vale, surrounded by fragrant wild flowers, impressively lush trees and a warm, pleasant breeze in the air. 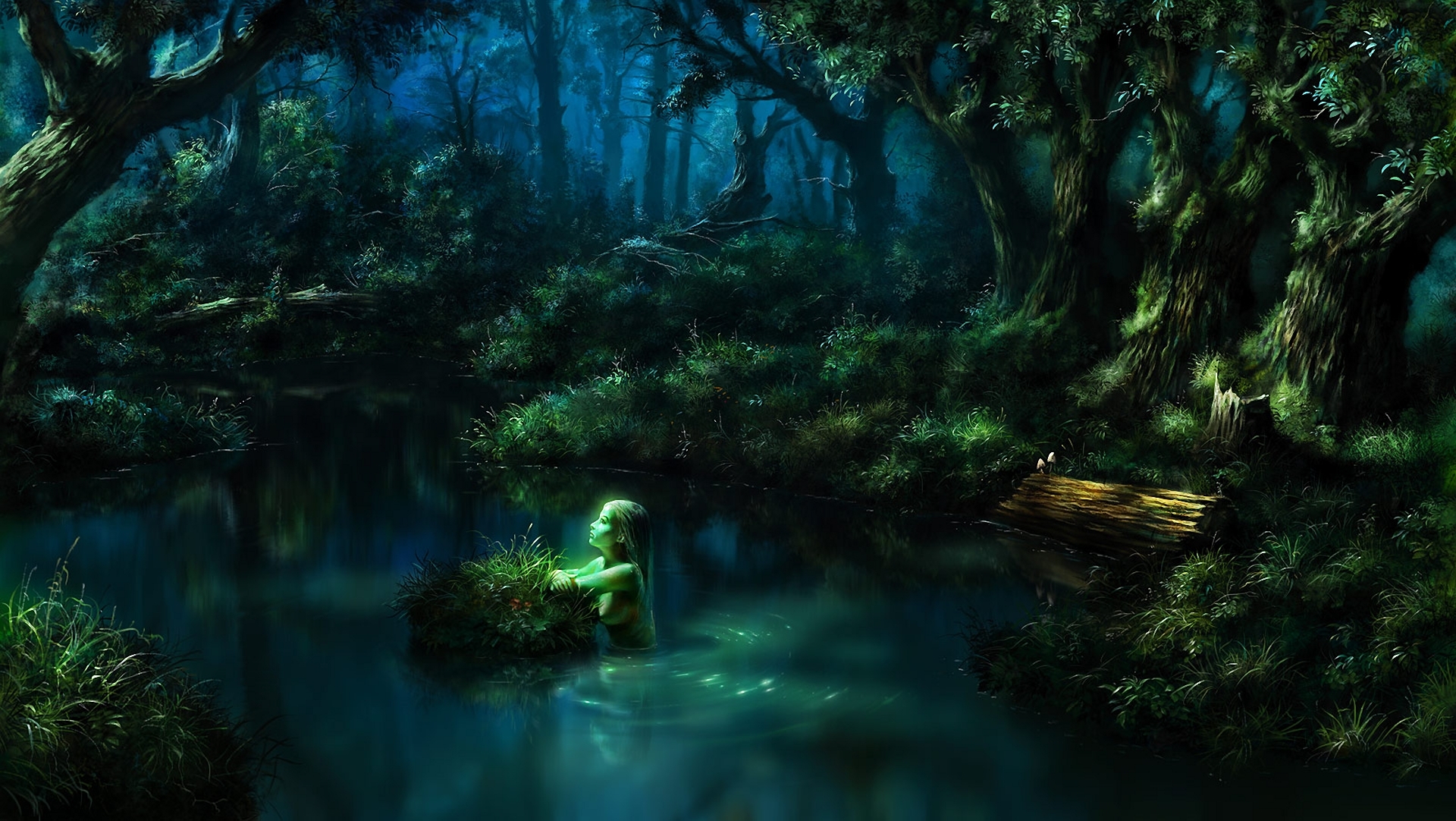 The pond was surrounded by all manner of sylphs, dryads, faeries, pixies, brownies and butterflies. There were fawns and foxes with strange antlers and fluffy rabbits with remarkable fangs. Satyrs were darting in and out of the shadows, observing the ever growing group of crusaders standing ankle deep in the waters of the pond.

Eventually, a great, white unicorn materialised on the opposite end of the pond. It had an impressive, spiralling ivory horn jutting from its forehead. It stood as tall as a warhorse, and its fur was white and unblemished. Its braided mane, tail, beard and fetlocks were the colour of light honey. When it spoke to the group, its voice materialised in their thoughts like a warm blanket.

It introduced itself as Yathaghera, the Guardian of the Crossing, a servant to Lurue, the Unicorn Queen and the Queen of Talking Beasts. It was charged to protect this crossing by Titiana, the Summer Queen and explained that the crossing between the Feywild and Minauros shouldn’t have existed, considering the Seal of Divine Animus. It could, therefore, not allow the group to pass, together with the crusaders.

It could, however, transport the heroes and crusaders back to Pinefall if the heroes were willing to accept a debt; they would at one point be required to perform a quest for Queen Titiana. They would be bound to this debt, should they accept, and Yathaghera promised that the quest would be a fair one, within the capabilities of the heroes to perform it.

The heroes accepted and once again, the fireflies and dragonflies surrounded them as the water started to radiate colours. When the light died away, they found themselves standing in the noticeably colder waters of the pond. At the edge of the pond stood Isobel, carrying a stack of blankets and towels. Next to her stood a remarkably tall man, dressed in simple clothes that were much to short for him; Lord Destan, back in his own body and awake.

The heroes had finally made it back.