Previously, the heroes had returned to Pinefall with over four hundred rescued crusaders and came face to face with Lord Destan, alive and well in the care of the witch Isobel. After a conversation with the villagers of Bristlecone aid was sent to the abandoned village where the crusaders would make a temporary home. Food, blankets and tents were provided. The conversation quickly turned to what to do next, and it seemed like the crusaders were not as unified as the heroes had liked. Some had thoughts of returning to their orders, some wanted to live a quiet life and some seemed to have darker goals in mind.

When everyone was getting settled in at the abandoned village, Luca took the opportunity to speak to Dame Josephine, by way of a translator, to inform her about the current political landscape and the general history of Lyria and the different dynastic families that held the royal seat.

The Celtician listened intently, in particular about King Philip d’Aragon, third of his name, who decreed that women were equal to men under the law, in all matters of inheritance, including in rights of succession. This is how the Valois dynasty started. A dynasty Dame Josephine belonged to and was arguably the most senior member of.

A decision was made by the heroes and the senior leadership of the crusaders that the court should be made aware of the crusader’s presence in the Silverpine Hills, especially considering many of them had no intention of returning to the orders they once belonged to. The court would want to know that a small army of strangers had appeared in the heartland.

A plan was hatched to use the griffons to fly to Kingsport. Dame Josephine would fly on Tourbillon and Lord Destan would fly with her as a passenger. Prior Benedict would be a passenger due to his status as the Knight Captain of the expedition, as would Ser Florianus because of his renown. Dalinda the elven translator would get a spot, as she would be invaluable in any conversations. The rest of the griffons would be used to transport the heroes.

When the plan had been formed formed and agreed upon by all parties, Emrys eagerly joined the Highharvestide festivities in Bristlecone and Astrid decided to go with him. James followed, not because he was keen on the party, but rather to keep an eye out for any of the crusaders who were out for trouble. Quentin went as well and made an attempt to hide the scabbard of his sword by wrapping it in a blanket, only to find that the thorny roses bloomed straight through the cloth. 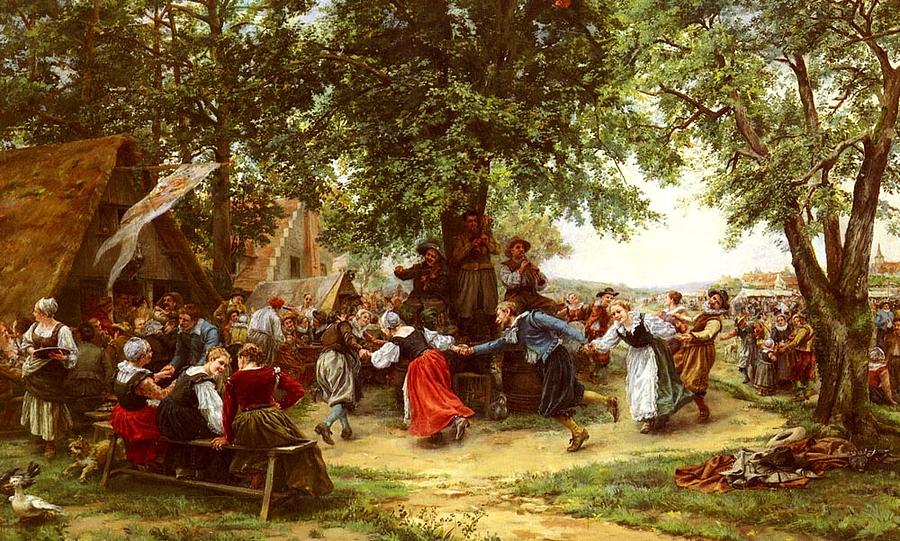 When they arrived in Bristlecone they found that the villagers had set up tables and bonfires around the bridge across the small river. They shared pastries with clotted cream and jam, honeyed apples, rich stews with mutton, cloves and parsley, and tankards of rich Fulham ale. The inhabitants of the hollar had travelled down to Bristlecone and had laid out their assortments of foraged nuts, berries and mushrooms and some they were roasting a large dear over an open fire, glazing and basting it with honey and forest thyme.

As the visitors arrived the villagers seemed well prepared. Children gawked a little but were quickly distracted by the dog breeders’ puppies and the face paints that one of the villagers was decorating them with. They soon went back to pretending to be bears and wolves.

For a while the festivities were pleasant. But as the evening set in the mood started to turn. The mood of a  small number of the crusaders, armsmen mostly, had turned sour ant their demeanour became hostile. The heroes were quick to pick up on this shift and came up with several plans in order to get the crusaders to depart back to their camp at the abandoned village.

James put Astrid to the task of causing as much awkwardness as she possibly could, trying to dissuade the crusaders from lingering at the feast. Emrys tried to perform a song meant to convince the crusaders to wrap things up and head back. Quentin decided to load up a cart of food and drinks to lure the crusaders back to camp. Together they managed to convince those crusaders who had no or few bad intentions to retire, but a small, persistent group of trouble seekers stubbornly stayed behind.

Eventually, Destan is convinced to tell the Bristlecone villagers to return to their homes and cease the festivities. Due to the visitors from Hunter’s Hollar having plans to camp out before heading back to the hollar in the morning, the troublesome crusaders continued to have a place to gather and look for entertainment. Frederick, the foppish Daerlanian who was the defacto leader of the people of Hunter’s Hollar tried to diffuse the situation, with little success, considering the language barrier.

While all of this had been happening, Luca and Emma had stayed behind in camp. Emma had been tending to the needs of all the shell shocked crusaders and Luca had been taking care of Dame Victoria Greywater, the knight that Emma had inhabited during her time in Old Llygad. She had a fragile mind and was prone to bouts of crying. It would be the perfect victim to Blackstar’s incessant hunger. The staff had been more forceful and communicative since returning to Pinefall and Luca though that nobody would miss Dame Victoria and her constant wailing.

When Dame Victoria had found a moment of calm, which were few and far between, Luca convinced her to lay down to sleep. He made note of who was sleeping where and how easily it would be to prey upon her. He found Emma, and the two decided to head for Bristlecone.

Once there they were quickly informed of the situation and decided to help the rest of the heroes get the unruly crusaders in line. Luca ended up charming several crusaders to come back with him to camp. On the way he changed his mind on Dame Victoria and decided to single out one of the unruly crusaders instead. He lured the armsman into the woods where he murdered him with rays of fire after a short struggle. Blackstar seemed satisfied.

Having no other way to hide the charred corpse, Luca went down on both knees and spent a long time digging in the dirt with his bare hands in order to create a shallow grave in which he could hide the corpse. He paid for the hastily hidden corpse with dirtied and bloodied fingers. He hoped it would be enough.

Back at the bridge things escalated quickly as Astrid and James engaged the last remaining trouble makers. Before the injuries escalated beyond black eyes and broken noses Emrys used his magic to make a bonfire nearby explode in coloured fireworks. Everything came to a screeching halt at that display and in that moment, the remaining crusaders decided to avoid bloodshed and return to camp.

Emrys and Emma returned to camp as well, while Quentin, James and Astrid decided to stay behind, just in case.