Previously, the heroes finalised their plan to go and find Kalina, who was supposedly robbing and stealing around the Avondale woods with her crew of bandits. They decided to pass by the Sheridan estate first to pick up their reward, as it was close to their area of destination. Astrid found the heroes passage upriver on a barge, belonging to Aram, a boatsman they had travelled with before. When they arrived in Lynnecombe they found a crude map of the trails and paths around Avondale wood accompanying several warnings to steer clear.

Arriving in the little rivertown of Lynnecombe-upon-Lyn, having just discovered the notice board and the troubling messages regarding bandits around the Avondale woods, the heroes travelled up the path leading from the village to the road that would take them to the Sheridan estate. It was in the early afternoon and the air was wet and fresh with autumn.

As they entered the forest that surrounded the estate, the trees ranging from bright yellow to red so dark as to border on purple, they saw a large caravan of six ox-drawn carts on the road ahead of them. When they got closer they could see that a few of the carts were laden with masonry tools covered in tarps, while the rest were carrying large limestones.

The carts were driven by teamsters of all stripes; Lyrians, Beauclairois, dwarves and a half-elf. The people who accompanied them were all humans, strong of limbs and dressed like masons. The one to lead them was an exceptional specimen by the name of Barnes, who sported a thick head of brown hair and a large bushy moustache. He explained he was on his way to the Sheridan estate to finish up some work to the dépendance. He seemed a bit uncomfortable, which the heroes wrote up to the large numbers of bandits that had been reported in the area.

After squeezing their way past the carts that were taking up the road, the heroes said goodbye to the masons and teamsters and travelled ahead. Soon, they came upon the stone, tall-pillared bridge across Raven’s Craig glen, a small valley that ran along the southern end of the Sheridan estate which sported a small tributary that lead to the river Lyn in the east. This was the bridge that was the scene of the conflict between them and the Sheridan house guard as the heroes tried to save the Kaedwyni orcs from being hung just for being orcs.

On the far end of the bridge the heroes saw a squad of well-armed Sheridan guards. They recognised them as such by their house colours (purple and black) and the strange sidearm they carried. They were greeted as they walked across the bridge and spoke to sergeant Rhalek of Darkhollow. He asked the heroes to state their business, and was delighted to hear that they came to visit the estate to pick up the reward that was promised to them for saving Lord Destan. He went on to explain that there was a celebration planned to commemorate Lady Gwynn, Lord John’s late wife.

The heroes continued on and noticed a travelling merchant carrying a stuffed pack of goods on his back further up the road who, upon seeing them, turned around and returned from where he came. Just at that moment, James noticed an observer in the treeline upstream along the bank of the tributary, but decided to continue walking.

With some difficulty the rest of the group managed to get used to being invisible and managed to sneak past the guards and get across the bridge to the opposite bank of the tributary. As a result of different people travelling with different ease, the group was quite spread out, with Astrid and James taking up the front, while Luca and Quentin (who was forced to remove his armour in order to keep from making too much noise) were squarely in the back.

As the group came closer, despite all their precaution, they managed to alert the observer, who they had now confirmed was a tall female orc who had been observing the Sheridan estate; being able to watch a large part of the manor and front as well as backyard and everything that went on there. She became suspicious and despite the attempts the heroes made to deceive her, she wanted to depart. 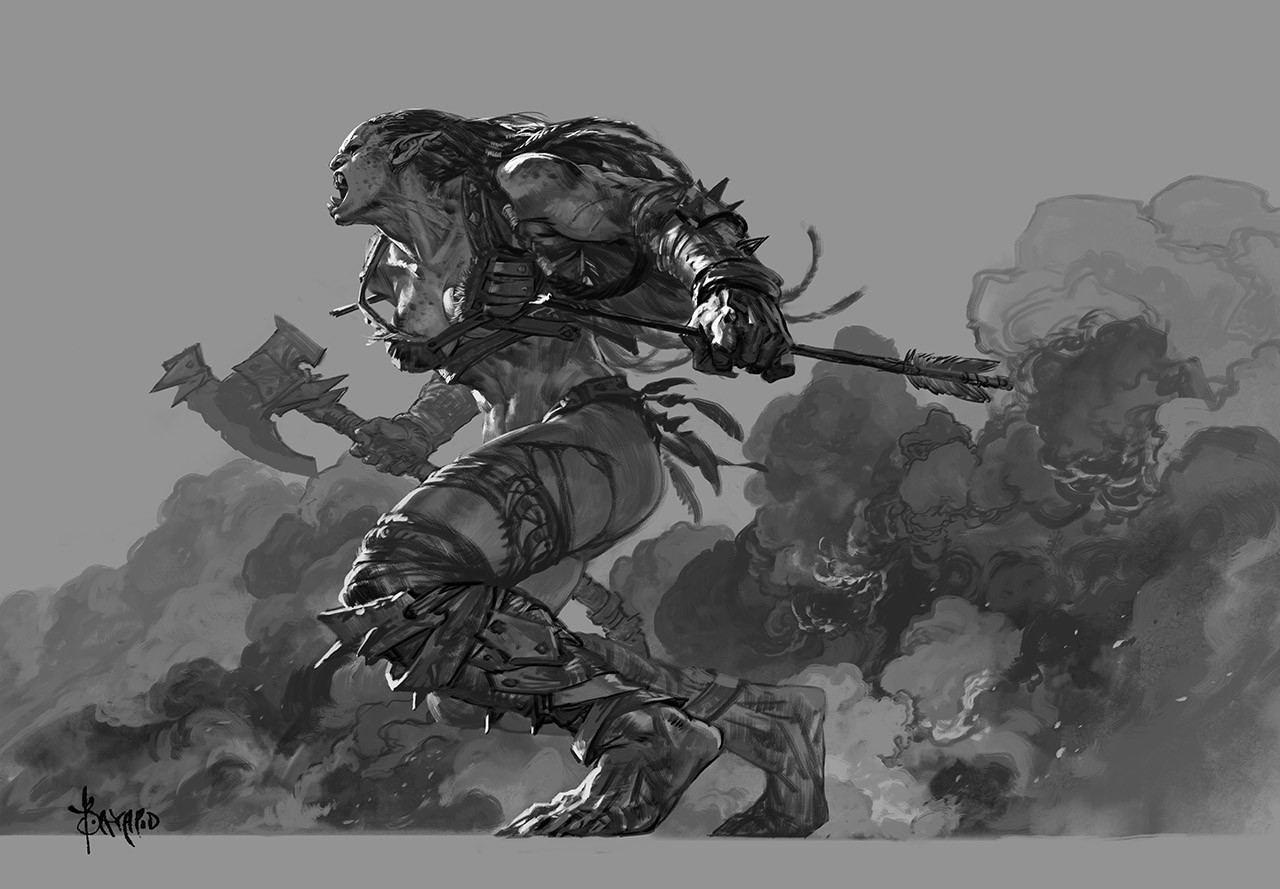 That’s when a chase started. Astrid ran up to her, breaking cover and dropping the invisibility spell, and attempted to grab hold of her and wrestle her to the ground. Unfortunately the powerful orc shrugged her off. James came up and successfully managed to disarm her of one of her weapons, at which point she started running. Surprisingly fleet of foot, the heroes set in pursuit.

Emrys called upon his ever increasing array of arcane abilities and attempted to hypnotise the orc. She unfortunately shrugged off the scintillating effects of the spell while both Astrid and James were caught in it. To add insult to injury, Emrys felt a surge of arcane energy well up inside of him which he couldn’t contain. He found himself unable to speak as the arcane energy streamed out of his eyes and mouth; the same that happened to him when they were in Bournemouth.

The orc got a head start but the heroes continued in pursuit anyway. She was surprisingly swift and it took everything in the heroes to keep up with her. She warned James to back off as she slashed at him with her remaining weapon in fluent Lyrian. The heroes ignored her warning and continued pursuit.