Previously, the Heroes of the White Eye entered the carceratum in search of the rebel lords with the purpose of liberating them. The prisoners had overrun the prison and the heroes were unsure what they would find there. Once inside, the prisoners tried to repel the and a fight broke out in which Luca killed several prisoners and Astrid beat several of them into unconsciousness.

The prisoners retreated and a dialogue was opened. It turned out that the two rebel lords, one of which had been wounded in an attempt on his life, had allied themselves with two senior prisoners in order to break out into the ancient waterways, only to have stumbled upon a large host of skaven.

James, after staying at the rear until it was clear how some of the prisoners who belonged to the Sunken Knuckles gang would respond to his presence, moved up to the area of the carceratum where the prisoners had made their stand. The prisoners unfortunate enough to get in Astrid’s way were slowly regaining consciousness behind him and moving to rejoin the rest of the prisoners.

After having engaged the prisoners as well as the rebel lords in a discussion, the heroes found that they had found a way out of the carceratum by breaking through a wall into the waterways. Garvan, a member of the Steady Hand who was a specialist in moving about the waterways, was confident that once they could get into the waterways and get past the skaven he could get everyone to the surface within ten minutes, emerging anywhere in or around Steward Square.

The different options were discussed. Taking the rebel lords out of the prison by way of Luca’s proposed portals was met with hesitation from lord Fabian, as the two lords had given their word to Yurina and Garvan that they would make sure they would be liberated as well. It was clear that a small group of the prisoners believed that surrendering to the crownsguard would lead to their immediate execution, while others believed they would be punished very harshly. James suggested that those who felt in danger could possibly be smuggled out of the prison by Emrys turning them invisible. Lastly, there was the option of going into the waterways and fighting the skaven opposition they would find there.

In a surprising turn of eloquence, Blackstar spoke to Luca and told him that it believed that evil men shouldn’t be executed for fear of “swelling the wrong ranks in the war to come.” It volunteered to reap them instead.

A decision was made to clear the hole in the wall which lead to the waterways and see what the skaven opposition was like. Using Blackstar’s uncanny ability to detect the souls in the vicinity, Luca noticed that there were in excess of three dozen souls in the area. In the meantime, James went to inspect the assassin, who had been chained up in one of the cells. When the assassin was about to exclaim praise for Melchior, his father, James had heard enough and shot an arrow into the man’s chest, killing him instantly.

Once Quentin and Astrid broke through the barrier and moved into the waterways, a foul smelling sewer tunnel whose bricks were slick with slime and phosphorescent moss, they were beset from all sides by the vicious skaven, quickly swarming forth in a bid to overwhelm them. There were over a dozen of them, ranging from the small and feeble to the larger, ogre-sized skaven, ridden by their whip-wielding taskmasters. Among them, was another shaman, which had caused them so much trouble in the catacombs underneath the Sheridan estate. 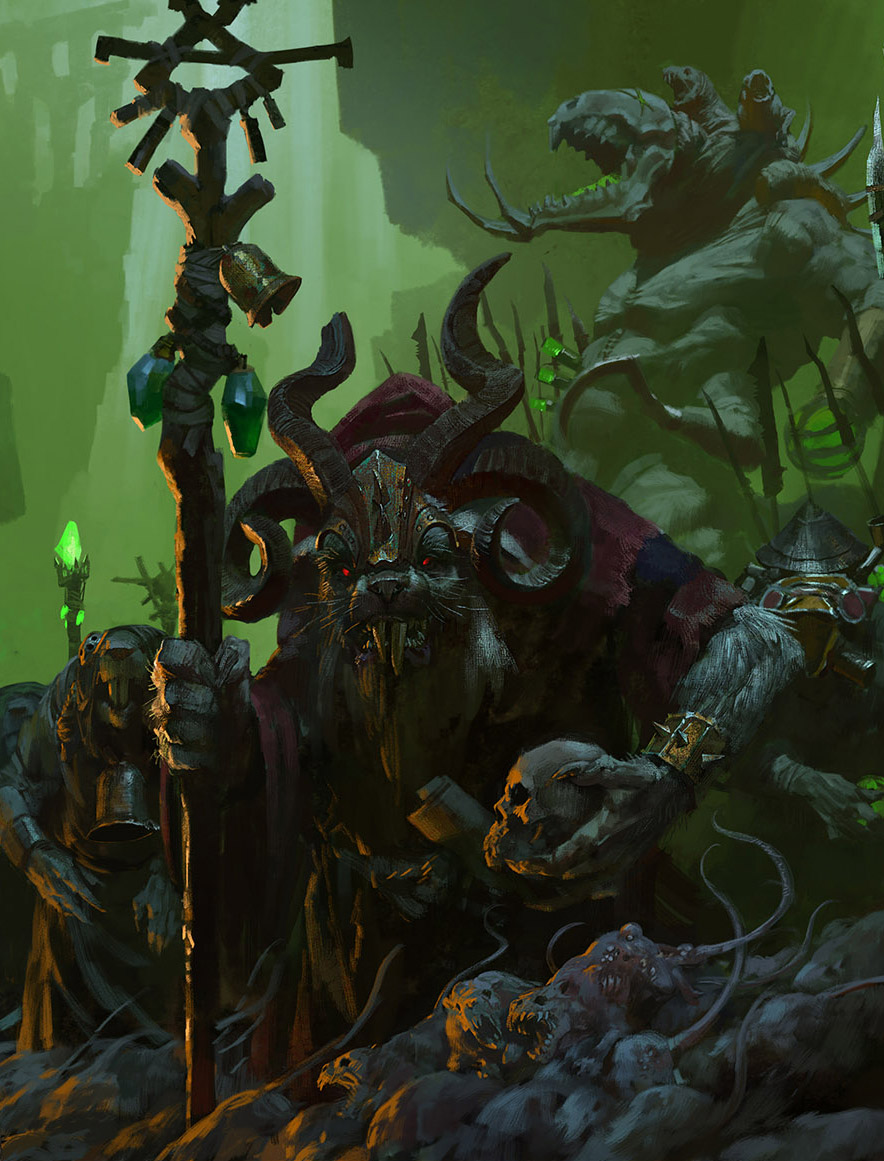