Previously, the heroes, still reeling from prior Benedict’s sermon, got ready to depart Kingsport, making arrangements to travel to Eastray aboard The Old Queen, together with captain Randall and two guides, Michel and Isalien. While at anchor for the night during a horrible storm, everyone was awoken by Neiman who had spotted a raft with a strange child on it.

In the forward hull, amidst the swaying of the ship, lit only by a lantern, the heroes inspected the corpse of the man that was found on the raft with the young boy. He was disembowelled and likely died from that wound. His intestines had been gnawed upon and it had every appearance that the boy had been responsible for the teeth marks.

A conflict was brewing among the crew and passengers about what to do with the child and everyone with an opinion was turning to captain Lorne to make a decision. One side claimed that the child was an abomination and an ill omen which needed to be cast overboard, while the other side argued that the boy was possibly only guilty of keeping himself alive under extreme circumstances and should be granted clemency.

Emrys could make out that both the man and the boy were wearing clothing commonly worn by people from Fulham. He concluded that both the boy and the man were well off, if not wealthy, a conclusion that James shared after investigating the man and finding that his teeth were in good condition. Eventually Quentin and Astrid, with the blessing of captain Lorne, gave the dead man a seaman’s grave by tossing the body overboard and letting the waves take him.

The young Ridley, who had been particularly disturbed by the young boy, had been hiding close to the entrance to the captain’s quarters. Emrys went to talk to her and discovered that she, like Dyana and Isalien, wanted the captain to cast the boy overboard, while Neiman and Michel were dead set against such barbarism.

After Luca prepared a ritual to investigate the boy magically, attempting to divine whether the boy had been touched by magic in some way, he found no traces. While Astrid was much harsher in her recommendation on what to do with the boy, the rest of the heroes decided that the boy was not guilty of anything deserving such punishment and managed to convince the captain to let the boy live. They recommended that the boy stay locked up in the captain’s quarters, and James and Emrys volunteered to stand watch, in case some of the crew or passengers would try to harm the boy.

When the captain had made his decision and the people on the ship went back to rest, James and Emrys sat together. It didn’t take long before everyone’s rest was once again disturbed; this time by a passenger named Donimir who had gotten up during the night to get a drink of water from the barrels of fresh water, only to keel over and vomit violently. An investigation of the stores of fresh water revealed that all fresh water aboard the ship had spoiled and that strange, eel-like creatures could be seen infesting it. Luca investigated the creatures and concluded that they were not the same as the slug which was retrieved from Jeanne’s headwound. The conclusion was that the water was probably brough aboard from Kingsport and that it was there where it got infected, confirming that the disease was already spreading in the capital.

The rest of the passengers soon discovered that Donimir had passed away. James, who had not left his spot in front of the door of the captain’s quarters, confirmed that the boy was still inside. The captain ordered the water to be thrown overboard. It was another few hours until dawn and people tried to get the rest they could. At dawn, anchor was drawn and the travel to Eastray was resumed.

The approach to Eastray seemed like a laborious affair as the ship had to navigate between reefs and sandbanks. As the ship came closer to the shore and the town it appeared that it was settled on a hillock with two muddy rivers on either side of it. In the brackish water along the shore low mangroves blurred the lines of where water began and land ended. The harbour was situated in a small bay, protected by a well-constructed earthen wall, supported by wood and stones. Once the ship had cast its ropes and released the gangplank, Emrys decided to quickly rush ahead and make a show of his arrival, allowing the crew to take the body of Donimir offboard.

Captain Lorne had arranged for someone to take care of the boy. A plain-faced woman in her late years, with big hips and strong arms came and introduced herself to James as Leonie. She was accompanied by a string of children and James was told she ran the Hungry Hag, an inn that provided work for local orphans. The boy would be put to work and hopefully earn himself a dry and warm place to sleep. James, curious about the woman, tested her understanding of the cant of the underworld and he was not surprised to see that she understood James’ codes and doublespeak.

Eastray turned out to be a miserable town compared to Kingsport or Bournemouth. It consisted mostly of wooden buildings built on sturdy poles which had been driven deep into the soggy ground to give them some foundation. The wood was treated with a coat of black tar paint to treat it against rot. The only stone which was used was red bricks, used for chimneys, created in furnaces on the edge of town. The tar-black wood, red bricks and mostly thatched roofs set Eastray even further apart from other Lyrian cities.

None of the streets were paved; a thick dark muck pervaded every road and lane. Logs had been sunken in the deep mud in order to provide some stability, and in many places small bridgeways had been created between the porches that were common around every building, each of them elevated by the same poles that elevated the houses. Pigs, chickens, geese and goats rooted around in the muck in pens and coops behind the small houses, and it seemed that the mud was so pervasive that everyone was used to it, or soon would be. 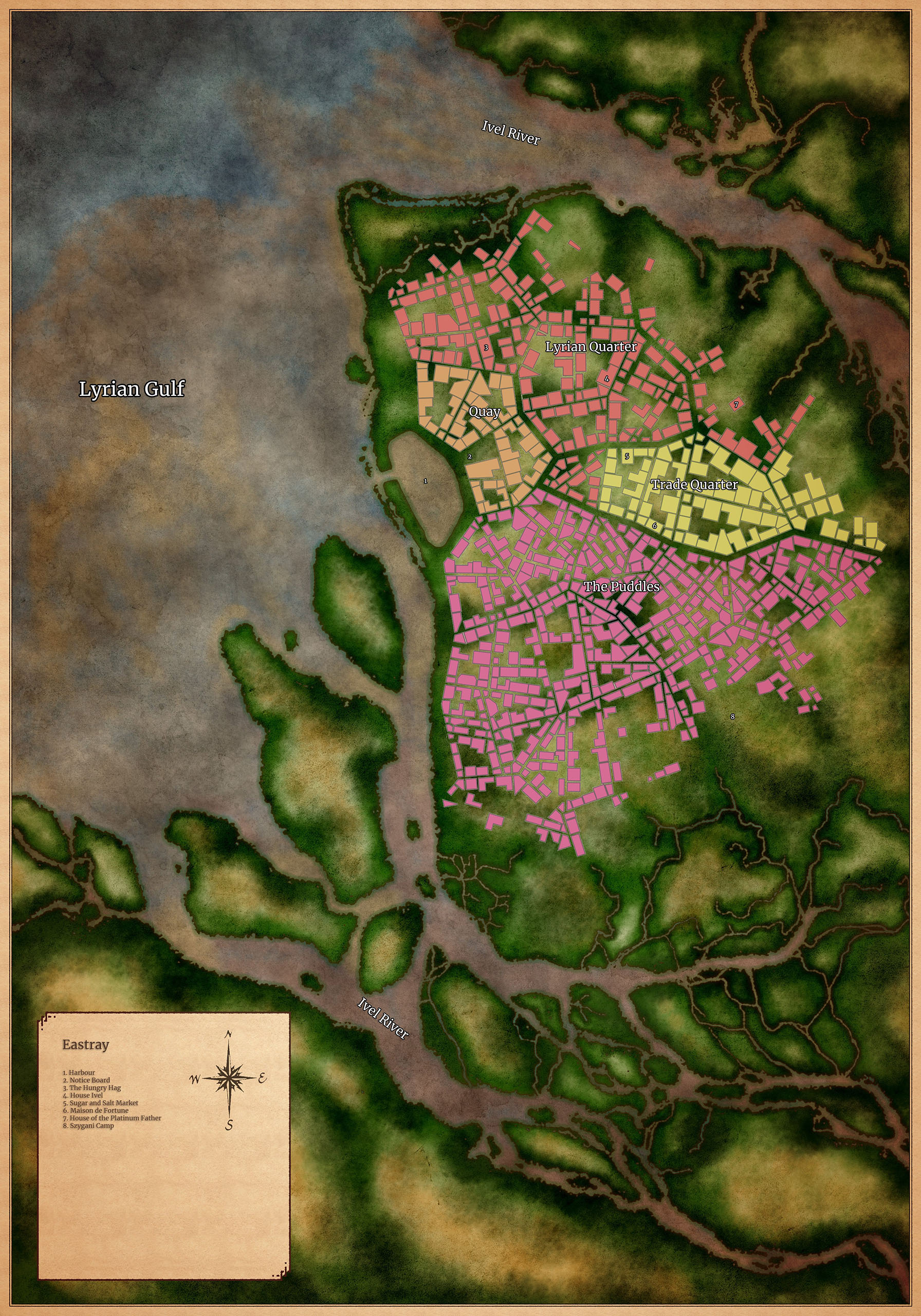