Previously, the heroes arrived in Eastray and found their way to the Hungry Hag where they took some much needed rest. Luca explored the city for a while and learned what was going on. Upon his return to the Hungry Hag, he and James had a conversation with a strange Mazurian noble, lady Azsharastrasza, or lady Asha for short, who was looking for people to trace down her mate, whom she claimed had fallen victim to a charismatic priest of the Cult of the Dark Queen by the name of Dominik. She had tracked the cult down to Dunagore and managed to find out the location of their hideout; an ancient temple deep in the hinterlands of Eastmarsh. She also had a stone statue that resembled the one that the Sheridans found in the catacombs underneath Lynnecombe. The heroes, while intrigued, could not give priority to lady Asha and left for Rivermeet the next day, and from there would have to make their way to Blackbough on foot.

Leaving the settlement of Rivermeet behind, the heroes and their travelling companions began to make their way to Blackbough on foot. Isalien, the tracker who had plotted their course towards the east-south-east, said that it would be about a three day travel if all went well. Captain Randall seemed to lighten up at that news, but it was Michel that everyone looked to; being the only Acadian he seemed the most experience in the swamps. His face betrayed that her caveat was an important one; if all went well.

The descent from the hillock upon which Rivermeet was settled immediately saw the ground grow soggy, and after ten minutes the tall grass on either side of the narrow path had soaked the shoes, trousers and bottom of everyone’s cloaks. The small path meandered through the soggy countryside, avoiding puddles, ponds and peat bogs, and eventually strayed further away from the Ivel as the river headed south. As a result, the rushes and reeds started to make place for low-growing shrubs. Isalien said that if all went well, they’d meet up with river in a little over a day.

Again that  caveat; if all went well.

After a few hours, the area started to be dominated by large trees, cedars, cypresses and willows, with thick stems and large, slippery roots which arched high out of the ground. Isalien explained that the area often flooded with water, washing away a lot of the soil that the trees nestled in and exposing their roots. The roots were burrowed into the peat underneath the mud that the flooding brought, giving the trees the necessary foundation. Quickly grasses, ferns and bladderworts would sprout up around the trees, which in turn would become fertiliser for rosemary, buttonbush, cattails and bogspice when the water levels rose again. Water lilies, pondweed and swamp roses would thrive and the cycle would start anew.

Soon after it became clear that leeches were going to become a problem and on several occasions the group had to stop to remove them. Michel assured everyone that the mash was much worse during the warmer months, with aggressive mosquitos the size of a child’s hand attacking every piece skin you exposed. It also didn’t take long before the guides had pointed out a variety of cleverly hidden snakes and crocolisks of different sizes; though none nearly as large as the one hanging from the rafters at the Hungry Hag.

With only a couple of hours of light left, Isalien came upon traces of lizardfolk. James and Isalien scouted ahead and found that there was a large village of lizardfolk close by. The larger of them carried clubs spiked with bone and carried shields made from turtle shells. They had hung the skulls of animals, goblins and humans in the branches of trees around the village, and a quick assessment of the situation drove them to conclude that the lizardfolk were aggressive and territorial. In order to avoid the lizardfolk’s territory the group could either go around and add about half a day of travel, or they could attempt to sneak past by wading through murky waters. The group decided to do just that and managed to avoid contact with the lizardfolk at the cost of countless leech bites and drenched clothing.

That night shelter was found between the roots of an enormous willow tree where the tents were erected. With a great deal of effort a smoky fire was made. Everything was wet and finding dry wood seemed impossible. The heroes became acutely aware of the strange sounds of the marsh and found it difficult to find rest as there was every possibility to that they would be discovered by a small army of lizardfolk.

With clothing still damp from the previous day’s travel, the heroes and their companions continued on their way. Following their departure the groundwater level started to rise again and soon after shoes, trousers and robes were soaked through. When the heroes and their companions found themselves in the rushes on the edge of a flooded area of an enormous size it looked like the group would have to take a detour.

Before a new course could be plotted, Michel noticed a large houseboat coming into view through the pale, morning mist that was rising up from the lake. Contact was established with the people on deck who were piking the boat along through a collection of hand signals and the boat slowly drifted closer. The houseboat was home to two families of Acadians who were looking to trade. Michel negotiated a few simple trades and asked whether it was possible for the group to be ferried across the lake. The family eventually agreed when a few more trades were made. The heroes and their companions were not allowed to come into the home, but could sit on the front deck.

The journey continued on the other side of the lake until they came upon a large flooded grove of ancient cypress trees. After some contemplation, the group decided to take their belongings, hold it above their heads as much as they could, and wade through the murky waters. Anything was preferable to having to accept a detour. Having to depend on their guides, the heroes took it slowly through the grove, being extra careful to avoid crocolisks and snakes as well as patches of sinking sand; dangerous areas where the guides assured the heroes the ground would swallow them up completely.

On the other side of the grove they found that they were quickly approaching the river again, the water of which was the cause of the flood. With the remaining light a suitable spot was found among the rushes of the river, giving the group access to fresh, drinkable water. Michel used the opportunity to do some fishing  and he used his catch, together with some crawfish he dug up from the mud to create a spicy fish stew.

The next morning the group started moving shortly after dawn, continuing east and away from the river. The countryside changed, with slow rolling hills the further the group moved east. More trees, predominantly cypresses, birches and willows, started dotting the hinterland, and while the ground was still soggy, the swamp grounds were only contained to the low areas between the hills. As a result it became easier to avoid the dangerous lizards and snakes.

The sky became grey, overcast and dramatic. Cold air descended, and a fog came down upon the land like a blanket. Soon the heroes and their companions had a hard time seeing in front of them. When visibility had gone down to less than a hundred paces the progress slowed to a crawl. Soon after a pale glowing light appeared in the mist which seemed to be guiding the heroes through the light, but always at a distance.

Eventually, an eerie feeling came over the heroes and before they could react, a large, humanoid horror appeared from the fog, with malicious eyes, long claws and dark, dried skin stretched so tightly across its skull that it’s lips were torn open to reveal horrifying teeth. The glow came from the cavernous void where its chest should be, cradled by the rim of jagged ribs of its destroyed ribcage.

The mist hung thick and heavy across the marsh and the heroes and their travelling companions got ready. They had seen the enormous, ghoulish creature dart in and out of the fog and saw that the lights that had lead them into the trap were darting around nervously. 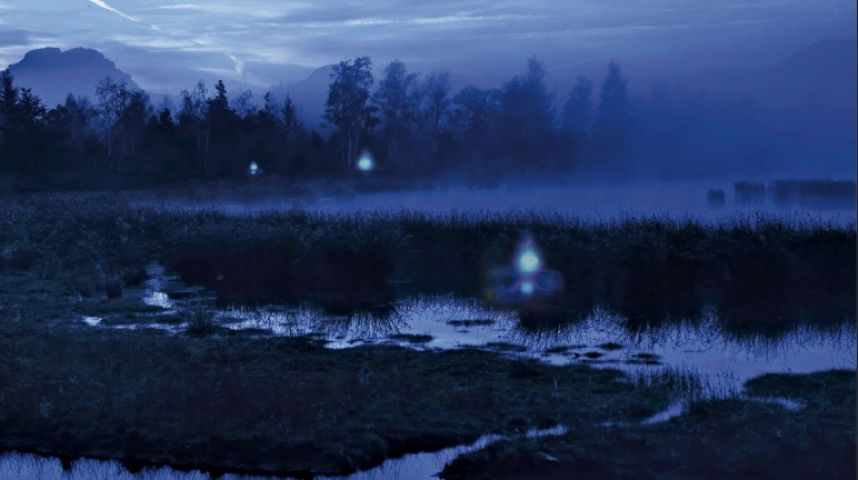 Before the creature struck, a dense, animated mist formed in which foggy duplicates of the creature formed, dissipated and reformed. These duplicates relentlessly attacked the heroes and their companions and was meant to soften them up before the creature moved in. Isalien, Randall and Michel were both quickly overwhelmed by the mist. Only Isalien ended up surviving, while Randall and Michel perished as they stumbled out of the fog and were confronted by the tiny, glowing creatures who were capable of shocking their victims.

The ghoulish creature, which Luca identified as a larger and likely much older version of the creature which attacked them en route from Bournemouth to Egremont on board the Old Queen, mostly focussed on Quentin, James and Astrid. Luca quickly lost consciousness due to the duplicates in the fog and Emrys stood over him, attempting to keep the glowing creatures at bay. The duplicates made it difficult to concentrate, made only worse when the foglet surrounded himself with illusionary images of itself, something which Emrys had also done as a precaution.

Astrid went down under the assault from the foglet, unable to keep its aggression at bay. James and Quentin managed to manoeuvre it out of the deadly mist and focussed on the knight while the rogue found opportunities to strike at it. Quentin had to dig deep in order to survive, even resorting to the abilities of Róisín; conjuring up a healing spirit and soothing his wounds with some of the nutritious berries that sometimes grew on the scabbard.

Meanwhile, Emrys rummaged through Luca’s belongings to find one of the potions that they had purchased from Ecgbrith and he managed to nurture his friend back to consciousness. Miraculously, Astrid managed to regain consciousness by herself. Together, they made a last stand against the foglet and managed to defeat it.

James recovered some of the daggers he had thrown at the foglet and took one to cut the beasts head off its shoulders in a rare display of brutality which usually was reserved for Astrid.