Previously, the heroes attempted to combat the fatigue and malaise that was afflicting some of them by taking some time in Blackbough to rest up, only to find that the land kept tugging at the threads of everyone’s mental fortitude, attempting to unravel it and undermine the heroes’ resolve. Astrid was particularly afflicted by it. It was mistress Ysgith who had urged the heroes to seek out the good sisters at the sacred grove in order to bring them a tribute in return for aid.

Having returned to the cabin with some food for Astrid and Isalien, the heroes found that Astrid was getting less and less responsive; only caring to lay in bed and sleep. After not being able to convince Astrid to eat, the conversation quickly turned to possibly beseeching the good sisters, and what it would be that the heroes would give as a tribute.

When James suggested that Luca might want to consider putting Blackstar up as a tribute, the staff immediately protested, claiming that the good sisters would use it  for the wrong purposes; “to swell the ranks of the wrong army.” It further expanded Luca’s insight into the twisted personality of the staff. It did not go unnoticed that the staff had become more and more vocal recently.

James was also interested to know what it would be that the group would request from the good sisters once their tribute had been accepted by them. He figured that asking for an orchid would be a waste, since that wasn’t what the heroes were in Blackbough to find. Luca suggested that instead of asking for the orchid, they could ask for something personal of whoever was responsible for the ward that was cast on the cursed khazra head. James remarked that it wasn’t unlikely for the good sisters themselves to be responsible for the magical ward.

On the nature and possible origin of the good sisters, and whether they were extra-planar, brought here during the last Conjunction of the Planes, Luca knew that there were a myriad of strange creatures that existed on the planes that drifted in the astral sea and boiled in the elemental chaos. It was very possible, and even quite likely that the good sisters hailed from one of these planes and were stuck here after the Great Waning set in and the planes that resided in the ethereal mist were locked away behind the Seal of Divine Animus.

It was around this time that there was an arrival at the gates of the Blackbough mansion; a group of loggers and guards, tired and wounded, had fled the hargrove after an attack on their logging camp. Emrys went to investigate and found that the guards at the gate seemed worried, but unfortunately the sorcerer was not able to persuade the guards to share their concerns. Emrys was tired and felt weighed down by the dreary place.

The heroes departed the mansion, deciding to let lord Oswin deal with the returning people without interference; they had more important objectives. On their way to the village they met Blythe and old Abigail, who were making their way to the mansion to provide aid for the returned people. The heroes attempted to get them to explain the concerns that the guards had shown, and it turned out to be one that both Blythe and Abigail shared; the lord was heavy handed to the point of cruelty. Upon saying goodbye, Abigail reaffirmed the route that the heroes would take to find the sacred grove by following a path from the south-east of the village.

The instructions lead the heroes to a small, overgrown path through a dense grove of trees. Carcerian moss dripped from the branches like fine lace. Small trinkets and charms made from twigs, flowers and stones hung in the branches all along the path. They resembled geometric shapes and simple figures of people and they strongly reminded Luca and James of the path that lead to Lilliana’s cave in the woods outside of Allenham.

They found a clearing at the heart of the sacred grove, filled with water-loaded, grassy ground. In the centre of the clearing stood an enormous willow tree, closely rivalling Geolgothis; the large oak that stood at the Seat of Friendship. The swooping branches of the grand willow tree were rich with bright, scarlet leaves, drooping majestically across the clearing like an umbrella.

Underneath that umbrella, a fairy ring of small clusters of crystals circled the tree, jutting out from the soggy ground like mushrooms. The broad trunk of the tree was decorated on one side with an elaborate carving of three women. From left to right; a woman who appeared to have horns, a woman who wore a veil across her eyes and a woman with multiple sets of arms. They appeared tall and slender, standing around a cauldron which the third woman was stirring with a large ladle.

Thick, gnarled roots bored into the ground around the thick tree and house a whole ecosystem of small plants and flowers. Three fragile flowers were chief among them; the ghost orchid. More crystals were jutting from deep underneath the tangled roots. 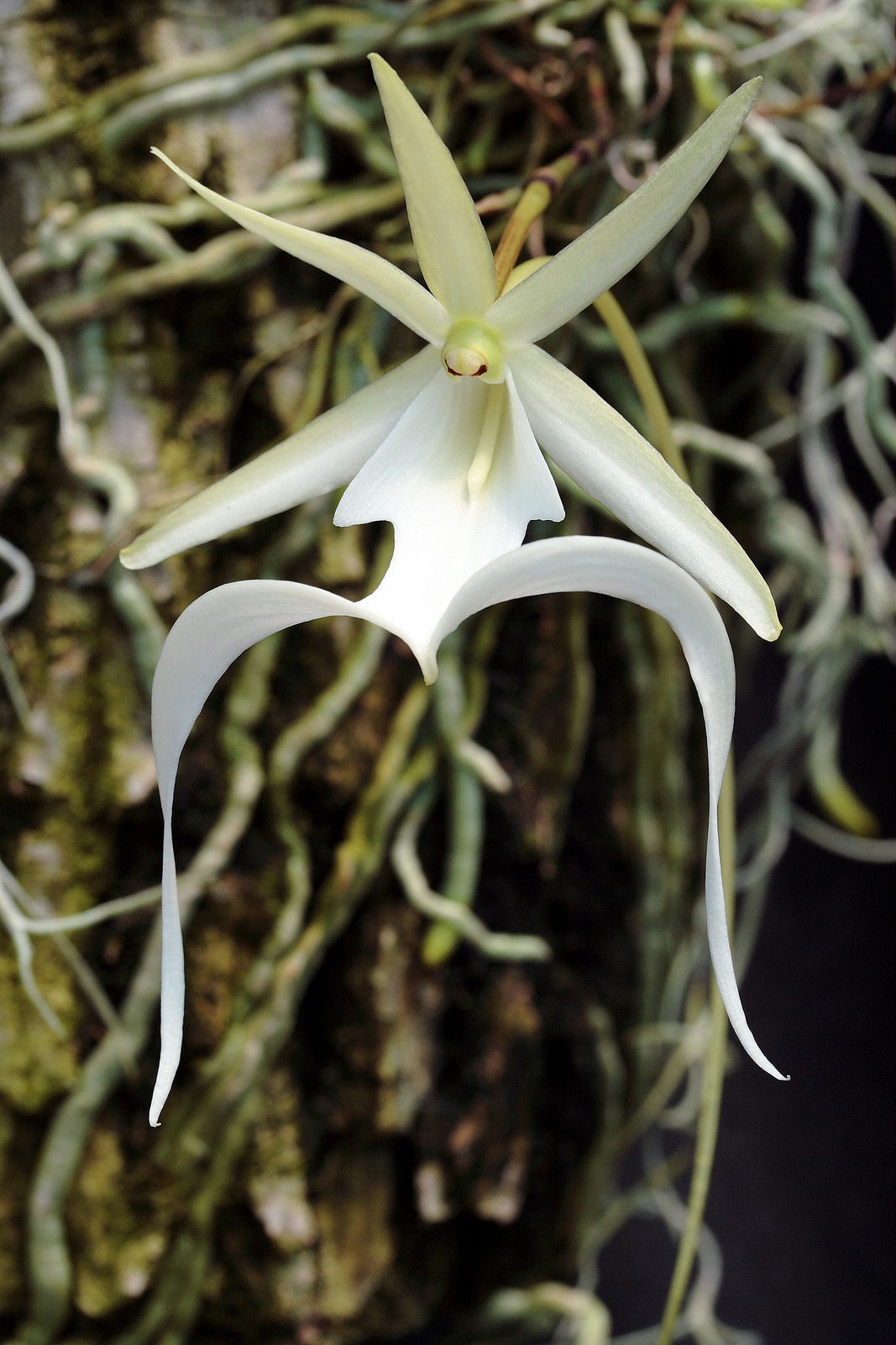 When Luca suggested making an attempt to grab one orchids James warned him that they were on sacred ground. Quentin was quite surprised by James’ reverence and told James that he respected his position. Whether James was earnestly respectful of the sacredness of the area, or respectful of the possibility they might end up hurt, none could say but James.

It was the roguish young elf that was the first to approach a stone altar in front of the carving of the good sisters. It was covered with dark, scarlet stains that also covered much of the grass and ground around the altar. Many sacrifices had taken place on this site over the generations, it was clear. James placed a large gemstone on the altar as an offering, and stepped back.

Quentin came next and untied the handkerchief he had been wearing since well before he met his companions. He knew that blood would be required for his sacrifice and so, cut the palm of his hand with a dagger and let it drench the handkerchief. He gently placed it on the altar next to James’ gemstone and took a step back.

While Luca was inspecting the orchids, Emrys stepped up to the altar and also produced a precious stone to place down on the altar. From the corner of his eyes, the sorcerer spotted some movement in the treeline and noticed several of the ghoulish creatures prowling menacingly in the darkness, as if held back by something, but eager to be unleashed.

Emrys’ gambit payed off, and the good sisters responded, though did not reveal themselves. They spoke in a singular voice, made up of three, different and dissonant voices. They explained in rather crude terms that they had been responsible for the ward placed on the khazra head, having been forced by a powerful follower of the Dark Queen. He had taken the sight of one of Memra, one of the good sisters and she who saw all in their land. He had promised to return it once his plan of killing the queen and spreading disease in the capital was complete.

The one to come to them was called Xamael the Defiler, but was known by many names; Melchior, Fedor, Dagnamiir to the dwarves, Lathorael to the elves, and many, many more. Fedor, the heroes knew, was the name of the scholar who had come to Blackbough earlier in the year. And Melchior was the name of Kalina’s “father,” as well as the one to enslave Kalauranthalasis, fashioning the wicked, jewelled daggers from his body to equip a small army of assassins to commit murders across Lyria.

Do you fear beasts and monsters? Oh, hard times are upon us, elfling; brother has turned against brother; the land is soaked in block; evil is rising stronger than ever before. Dark power has surfaced in Eastmarsh. It feeds on hatred and disdain. Destroy the beast and we will be grateful, and tell you all you wish to know.

And so the heroes took it upon themselves to seek out the lair of Kalauranthalasis, find Memra’s sight and return it to her, so that they may be rewarded with the ability to penetrate the ward that the good sisters placed on the khazra head so that Callum the Diviner can attempt to lift the curse which had taken hold of queen Isabella.

The good sisters said that they didn’t care for the trinkets, but they would take Quentin’s tribute; a handkerchief soaked in his own blood. Once taken, he could not remember the significance of the handkerchief and was filled with a sense of sorrow and grief, but for what he was not sure.

The heroes left the sacred grove and returned to Blackbough. Halfway up the hillock from the village to the mansion, they saw that the two guards who had fled the hargrove had been hung from their neck, while close to them was a stump of wood which was drenched in the blood of what was undoubtedly the loggers who fled the hargrove with the guards. At the mansion everyone was working hard to prepare for lord Oswin’s departure. He was taking lieutenant Aram and a group of guards to ride upon the hargrove.

After some deliberation, it was decided to ask Gareth, one of lord Oswin’s servants, to gather provisions for the heroes, including lanterns and oil, and for them to depart first thing in the morning. They would make their way south, towards the river and see if they could find passage downstream. If Astrid would not improve, Isalien would take her all the way to Eastray and await the return of the heroes. In the meantime, the heroes would venture north in search of the lair of Kalauranthalasis. The heroes reasoned that lady Asha, whom they had met in Eastray and was in search of her “mate”, had shown them a crude map of the whereabouts of the dragon’s lair.

The following morning the heroes found that everyone had slept without suffering the same nightmares they had experienced since arriving in Blackbough. It seemed that the good sisters had released their ever tightening grip. While Astrid was not feeling whole yet, everyone, including her, were feeling somewhat better.

As the heroes started to head south, they made a brief stop in Blackbough village, where James bought several small casks of rum from Davina, a broad-shouldered villager who was operating several stills in her hut. After concluding the deal, the heroes headed south, only to arrive at the river several hours later.