Previously, the heroes visited the Circle of Magi to look for Hamish, Luca’s friend who he was keen on visiting. Unable to reach Hamish they continued on to the College of Bards where they spoke to Andrew, a bard and nobleman who was on friendly terms with Emrys and could share some insights into the political situation of Lyria. The evening was cut short as the curfew went into effect and the heroes returned to the Careless Wanderer.

Before the morning came, James, Emrys and Quentin were plagued with cryptic nightmares.

James woke up on the floor next to his bed, claimed by Astrid, in a nest made of blankets. He quickly grabbed something with which he could scribble down his fleeting memories and recalled a burning Kingsport, the ground cracked with fel green fissures swallowing up people. He remember seeing a tentacle snatch up an orange jewel and crush it to dust. He reached into his bag for a bottle of alcohol, his dependence on it growing as it helped him cope.

For Emrys, the dream was filled with burning forests and broken, marble columns. His kin lay dead, their skin blistered. He remembered seeing the statue of to lovers in a passionate embrace, covered in roses. A crude hand reached out to drain the life from the roses. As he quenched his morning thirst and contemplated his dreams, he was struck by just how real and life-like they seemed. He decided to try and sleep a little more.

In Quentin’s dream he witnessed estates and vineyards burning. The withering of his loved ones. He saw trees heavy with fruit. An olive-skinned hand with long, black talon-like nails plucked a vine of grapes which withered at its touch. When he woke, he realised he would need to talk to someone, an oneiromancer.

Each of the three were reminded of some of the other dreams they had over the last couple of months. James, especially, had been subject of foreboding dreams. 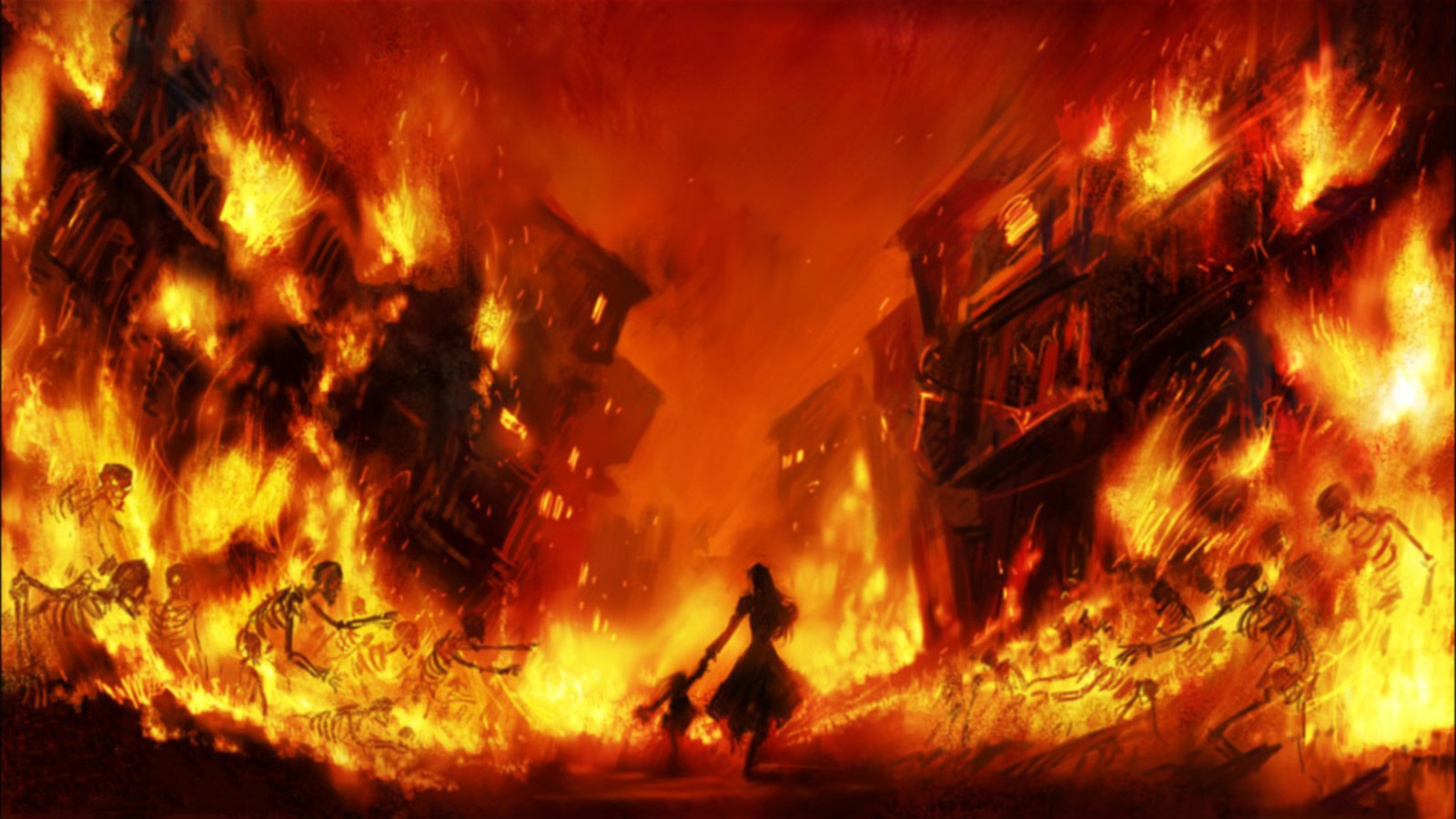 Luca’s morning started differently; he felt great, with a radiant warmth in his chest. He felt the compulsion to pray, so he cleaned his pits and bits, went downstairs and found the tavern far from open for business. He grabbed some food and headed out into the miserable weather to go to the cathedral in the hopes of attending a morning mass.

Walking through the empty streets Luca noticed the night-time braziers that the crownsguard would light up. Long since burned out, he found a little bit of charcoal at the bottom of one and wondered whether he could harvest enough of it to power the conjuration spell which he had been contemplating.

The cathedral was open and Luca went inside. There he found a few small groups of people and a handful of solitary individuals like himself praying while the clergy spent time cleaning the cathedral. He headed to the chapel of St. Aureus and kneeled down to pray. The warmth inside of his chest grew and he chuckled when he realised who he had become and have far removed it was from who he was when he was young.

Quentin and James both got up when they could smell breakfast. They bumped into one another while entering the tavern, and Quentin could smell the alcohol on James, but decided not to pursue it. James said that he had not been sleeping well and that he had strange dreams, which he didn’t think surprising, considering all that the heroes had been through. Quentin thought that James was dealing with it well, since James was as hungry as an ox. Quentin decided to go for a frugal breakfast, seemingly having been more disturbed by his dream.

The two heroes exchanged the details of their dreams over breakfast. Quentin did not share every detail and James chalked it up to Quentin not having noted down all the details before the memory of the dream faded away. Quentin asked James what the Lyrian attitude was to soothsayers and the like. His lord-father never approved of the superstition of fortune telling, but he remembered some of their servants talking about their dreams. James, unfortunately, couldn’t really say as he had always been more focussed on other things.

When Emrys eventually came down he managed to pretend that everything was fine, despite how he felt. It was at this time that Luca also returned from the cathedral. James asked Emrys and Luca whether they had had nightmares, but both denied. Emrys deftly steered the conversation to the topic of Astrid and whether or not she might need some care after her ordeal. The plan was made to find her a new weapon, while James decided he would check in with the day master, which was close by Dagran Forgewright’s smithy, which was where Emrys suggested they’d go for Astrid’s new weapon.

When James arrived at the butcher’s shop on Fleet street, he found that there were fewer members of the guild around. Communicating through subtle signals with the guards around the shop he was allowed entrance. There were no goods for sale at the shop, no people tending the counter, and no butchered pigs hanging from hooks in the back. He noticed another guard in the back who motioned him to go downstairs, into the basement. There he found the day master sitting at a table. He saw that the day master was still wounded; a blood soaked bandage over the side his mother had attacked him at.

The day master listened to James as he recalled every detail of his mission. When James was done, the day master asked James to speculate on the reason why so many winged serpents had been reported seeing flying from all parts in the direction of Eastmarsh. James couldn’t tell, but he did hand over the two books he had liberated from Kalauranthalasis’ treasure hoard, which pleased the day master greatly. Before departing, the day master once again tapped his glass eye with the tip of a dagger, saying that he would keep his eye on James.

Eventually James found the rest of the heroes at the Forgewright Arms, negotiating for an appropriate weapon for Astrid. Dagran Forgewright did not have any great swords in stock and claimed his stocks were low due to the crown buying up supplies in order to outfit troops who were heading east to bring the rebel houses back in line. He could, however, forge one, given enough time.

The long crafting time was mostly due to a critical shortage of charcoal in Kingsport; the supply of quality charcoal from the north had been interrupted by the invasion of orcs, who were harassing the Plains of Strife.

Luca showed Dagran the scrapings of lyrium slag which he had retrieved from around the portal underneath the Sheridan estate, all those months ago when he first met the others. The dwarf took Luca’s hand and stuck his nose in it, inhaling deeply. “I remember that smell,” the dwarven smith said while closing his eyes in reverie. When he opened them again, he dismissed the idea, since it was far too little to forge anything from. However, he did intimate that he could socket any lyrium crystals the heroes might have. Luca retrieved a small blue crystal from the assortment of different coloured crystals he had collected. He remembered from the pillars inside the ziggurat that blue crystals held abjuration magic and he thought it appropriate to benefit Astrid with some more protection after she had died at the hands of Xamael.

When the deal was struck, Emrys said; “The Heroes of the White Eye salute you.” That was met with a surprised look from Dagran, and an immediate nod of approval. In the meantime, the heroes were offered two simple longswords that were available, which they took for Astrid, and then said their goodbyes.

A short jaunt away from Forgewright Arms, in the heart of Old Town, the heroes found Dr. Arkenward’s house, a well-maintained, half-timbered house with a limestone masoned ground floor, and a beautifully shingled, tapered rooftop. When the heroes knocked on the door there was the voice of a woman with an accent which confirmed the rumours that Dr. Arkenward had married an aen adhar. Emrys announced himself as “Emrys Price”, saying that the heroes had come to learn how Dr. Arkenward was doing. The voice behind the door hesitated and confirmed Emrys’ last name. She again asked that the heroes state their business, and Emrys did a remarkable job of convincing Vydia, Arkenward’s wife, to let them in.

She was of slight frame, with dark brown hair. She was dressed in traditional Lyrian clothing which was popular among human, upper-middle class society. She also had a big bandage covering her left eye. One that seemed as if it had seen a change of dressing only recently.

The door lead into an ante-chamber which seemed to serve as a laundry room, which in turn was attached to a large kitchen. She offered the heroes a seat at a large, wooden dining table, as well as a warm, dark brown, bean drink. As the heroes sat down, she walked over to fill a small cauldron with water and hang it over a fire, which she lit using a simple cantrip that both Emrys and Luca recognised. As the water for the drinks was heating up the heroes spoke with Vydia. Emrys once again took the initiative.

The heroes learned that Vydia had been a gifted seer as a child, but left her religious-conservative home to find soothsayers and mystics to train under, eventually finding her way to Cuidad de Torres, the capital of Càrceres, where she studied with the Oracle of the Spires. It was there that she met Arkenward when he was a young mage, studying his craft in the city. Later they would move to Kingsport and start working at the Circle of Magi. Vydia found that she did not fit in well with the Circle and soon sought to work elsewhere, honing her talents.

When she started to have premonitions of the young queen being in danger Arkenward took it very seriously and started to use his position at the Circle to manoeuvre himself closer to the queen, eventually being asked to come to court to protect the sovereign.