Previously, the heroes were getting ready to descend into the ancient waterways below Ravensbourne and infiltrate the headquarters of the night master in order to find and retrieve Hamish. Before doing so they wanted to enjoy a lavish meal, prepared by Ramsey with the ingredients that James had arranged for, and were interrupted by some violence that broke out at the Careless Wanderer between a retinue loyal to lord Aberforth Dunkeswell and those loyal to lord Peregrine Blackwell, both contestants in the annual royal master angler fishing competition. Also, Luca finally completed his research into the ritual spell the heroes had found in the hoard of the green dragon and used it to summon forth a small dragon with colourful butterfly wings.

Luca introduced the dragonling to the rest of the heroes and it immediately drew the attention of Lauryn. While Quentin recognised the shape of the dragons of legend in the creature, it was Emrys which recognised it as a faerie creature, which also explained why Wynn had responded so fiercely; for there were rivalries among the sidhe.

The decision was made that the heroes would venture out to find the headquarters of the night master the following day. Luca had once again affirmed that Hamish was his friend and he wanted to help him. Astrid had in turn affirmed that she was Luca’s friend and she would help him.

The heroes retired to their rooms. Luca spent some time with the dragonling and found it hard to ignore Blackstar’s incessant need for attention. Blackstar only wanted one thing; to consume; consume the dragonling. James found that when he got to his room Astrid was not there and the cot that she had been sleeping in had been removed. He dismissed her absence and went to sleep.

In the morning, James got up early and left the Careless Wanderer to visit the Temple of Light and meet with father Devon. He realised that what he was about to undertake was dangerous and that it would be good moment to offload some of the valuables that he had gathered and put them to good use; should he not return, father Devon was to sell the valuables and dedicate the coin he earned to the clinic. James also asked whether father Devon would bless him, which the old priest did by reciting a short prayer of thanks and blessing.

In the meantime the rest of the heroes spent time together in the tavern eating some breakfast. Astrid seemed nervous, bouncing her legs as she ate. Luca shared a special potion with Astrid; one that would give imbue her body with a short burst of incredible speed.

When James returned he walked into the Careless Wanderer together with two men who looked as if they had spent the night on the road; mud-covered and soaked. When James sat down he, as well as Emrys, noticed that Quentin got a bit uncomfortable with the two riders. They stood at the bar and attempted to negotiate lodgings. Their Beauclairois accents were thick and it became clear that Quentin was concerned that they were the vanguard of high lord Gaulthier’s retinue. James offered that he could relay a message to lord Dorian if anything were to happen to Quentin.

For Quentin the arrival of the two riders meant that his father was not far away and he would be reunited with him soon, something which seemed to fill him with some trepidation.

Before departing, James went up to his room and took some time to disguise himself. Once he was done he was hard to recognise, with a deep, hooded cloak which obscured his face. At the same time, Emrys spoke with Lauryn and got an update of their outstanding debt with the Careless Wanderer, which was nearing one hundred gold crowns.

Quentin stepped into the foul weather and walked to the rear of the Careless Wanderer to find Wojciech. The Silesian was taking care of the Beauclairois destriers that the riders had entrusted to him. Quentin asked the stable master whether he could venture a guess on how far the retinue was away from Kingsport. The Silesian said it was likely that the men departed the host about two days prior, which meant that the host itself would likely arrive in about four days.

It was time for the heroes to make their way to Ravensbourne where James knew there was an entrance into the ancient waterways which would bring them closest to the headquarters of the night master. With some trickery to distract a patrolling group of crownsguard and custodians, the heroes managed to enter the grim subterranean world of the waterways. The dragonling, which Luca had named Caraxes, was sent to scout up ahead. Emrys and James almost immediately noticed various symbols left behind by the rogues of the Steady Hand. 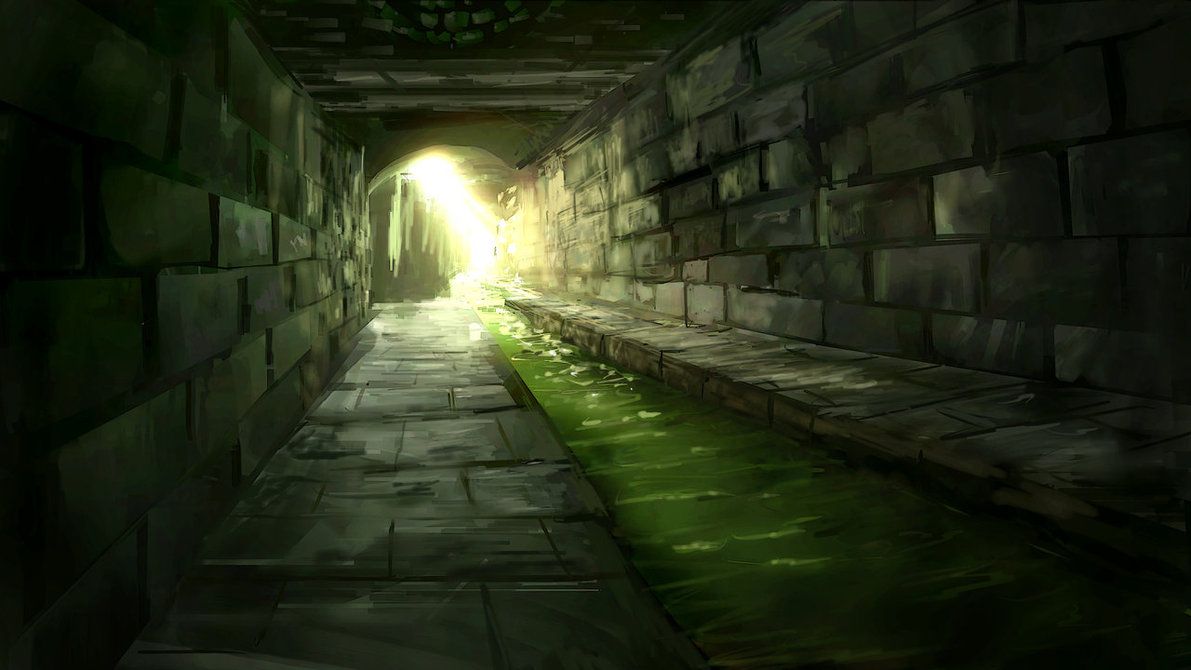 Soon the heroes stumbled upon a body of a skaven warrior. Its body seemed to have been partially embedded in the embankment of the underground canal that the heroes were walking down. Emrys mused that either the skaven was transmuted into the stone, or had been translocated into the stone when a teleportation spell went awry. He also noted that the armour that the skaven was wearing was made from the same thick leather that as the strange armour the heroes had seen at auction at the Landsdowne auction house in Bournemouth several months prior. Also, the skaven had several curious talismans tied on dirty bits of string around its neck.

Soon after the heroes came upon a junction where several large corridors connected. Mere minutes from where James believed the entrance to the headquarters of the night master to be, the junction was the location of the aftermath to a battle. Two dozen skaven of all shapes and sizes lay dead among the bodies of others; aberrant lords as well as the body of a custodian. It was a strange site which bore further investigation.