This is epic as fuck! I don’t like the casting for Adam Jensen, but Yelena Fedorova is very well-cast. I like how Jensen’s retractable swords are hardly ever visible except for in the slow-motion section. Perfect. There are so many little hidden gems in this. “Damnit, I’m seeing yellow again. No, I never asked for this.” Or that Jensen evolves in his unconscious state and shows signs of what I think is the writer’s interpretation of nano-technology, indicating that he’s the link to the Denton brothers. I think Megan Reed had the right face, but a far too pornographic body, so I’m divided on her casting. All in all, fucking amazing.

Spent the morning watching the Freedom Riders train while I sat in the sun and repaired my plate. Abel is finally up and about, recovered from his injuries. I don’t know where Ebon is, and Roland has left several days ago. I have lice and need a shave.

Abel asked me about pearls, a semi-precious stone that he needs to research the magical items we’ve recovered after the fight with Gwath. In the meantime, Ebon and I will go to castle Enneth, ours by right, to recover the books we found in Shraevyn’s Tomb.

I learned the Castle Enneth was completed in 799 DR, almost six hundred years ago, built by a paladin of Torm.

We arrived at Black Switch late in the afternoon to find it in good repair and the people in good spirits.

Left for Castle Enneth and found the books in an abandoned farmhouse with ease. The castle was imposing and intimidating. The thought of owning that and the lands and villages around it, is both strange and mildly terrifying. People were working on repairing one of the outer walls.

Found found a small hamlet named Kellet, five houses and a chicken roost. We rode through without stopping and arrived at the gates of Dagger Falls. We got greeted with our full title at the gate, at the garrison and at the stable. This is so deeply uncomfortable.

After a dicussion of the new powers found on the many magical items we recovered from Gwath, I got a simple, grey cloak, which supposedly grants the wearer some extra, phyiscal protection. I’m not sure I actually believe it, but it’s a nice, functional cloak. I fell asleep. What a day.

I got a shave and a haircut and I got my head deloused. I hate lice. The weather was fair and annoying. The barber was also annoying. It’s going to be one of those days.

Coming back to the garrison, Ebon was training with some of the new recruits. I woke up Abel and spoke to him and Ebon about leaving Daggerdale and moving on to “new and exciting lands.” For me, it’s not much about excitement, it’s about finding Heron.

We visited the “temple” of Lathandar and Morningmaster Handar Orin, asking him if we could peruse his maps. While discussing our departure he was startled about our decision to leave. My idea was to head to Tilverton, which is a city to the south, contested by Cormyr. We could then head west and skirt the desert. Orin mentioned Shadowdale. After mentioning we met up with Elminster he was equally startled; it seems Elminster is a bit of a celebrity.

We returned to the garrison only to see a tired, weather-worn man at the gate, demanding to speak to Lord Morn. Of median age with a salt and pepper beard, with a sturdy healthy body, the man wore the priestly vestments of Mystra, tattered from travel and struggle. Kenneth was his name.

We offered him some food and a chance to tell us about his predicament. He eagerly took us up in the hope we could open the door to Lord Morn. He came from the city of Weylune, where a new temple of Mystra was opened. He suspected something much darker and more sinister was happening with the temple. Villagers who came for worship ended up disappearing without a trace and Kenneth started encountering hostility when he started to ask questions.

While he ate I tried to ask him some pointed questions regarding the faith, so that I could determine whether he was genuine or not. It seemed he was.

We got an audience with Lord Morn and informed him of our decision not to accept the gift. He claimed that once accepted, the title was for life, but that a steward could be installed to rule in our stead.

Lord Morn was as perplexed by Kenneth’s story but wasn’t averse to speaking with him. He proposed dinner with us and Kenneth, at which time he would have some suggestions for a steward to take care of Castle Enneth.

I know I’ve been posting less of my thoughts and more buzzfeed type stuff, but this I couldn’t pass up. This short video is four-and-a-half minutes of pure Borderlands genius. It tells the story of Krieg the Psycho and it gives a brilliant look inside his deranged mind.

I’m sure this doesn’t do the argument that video games don’t cause violence in society any good, but boy I can’t wait for the second short that Gearbox is going to release, probably somewhere later this week.

Have I mentioned how much I love Borderlands? :)

Oh, I’m very nervous about my upcoming Shadowrun campaign. I’m busy cutting almost all the high fantasy out of the setting (replacing meta humans with evolved/mutated humans and magic with psionics, e.g), and making psionics more like it’s used in the film Looper (2012), where most people know parlour tricks, but it’s commonly accepted there’s not much more than that. As a result, the history and certain details of the world will need to change (no Great Ghost Dance, no dragons, e.g.) and I can finally get to the Shadowrun campaign I always wanted. Exciting!

Pretty soon I will start publishing some posts I’ve been working on to cover all the changes I want to make. Stay tuned! 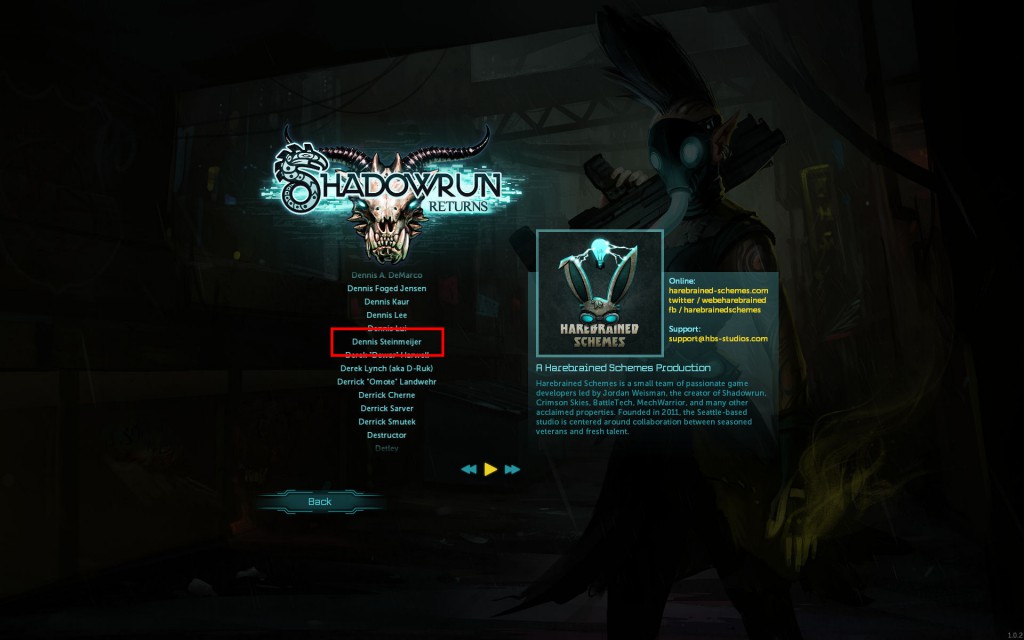