When Alistair Overeem recently defeated Brett Rogers at Strikeforce: Heavy Artillery and successfully defended his Strikeforce heavyweight belt I admit that I had no idea that he’d be that dominant in the fight. I was pretty confident that he would win, considering his high, K1 level striking and his mature ground game, especially compared to Rogers’ strong but sloppy striking and underdeveloped ground game. During the lead up to the fight I started watching his documentary, The Reem, which is an ongoing documentary, beautifully produced by Alistair’s people and very insightful and open. I highly recommend watching it if you’re into K1 or MMA.

At the time of this writing they are up to episode 4, but you can watch them all at the reemdocumentary YouTube channel, or athttp://thereem.com. Enjoy! I did.

…I haven’t written an update in a while. I’ll get to that soon, I promise. In the meantime, here’s a cool picture of Genki Sudo bowing after knocking out Royler Gracie. 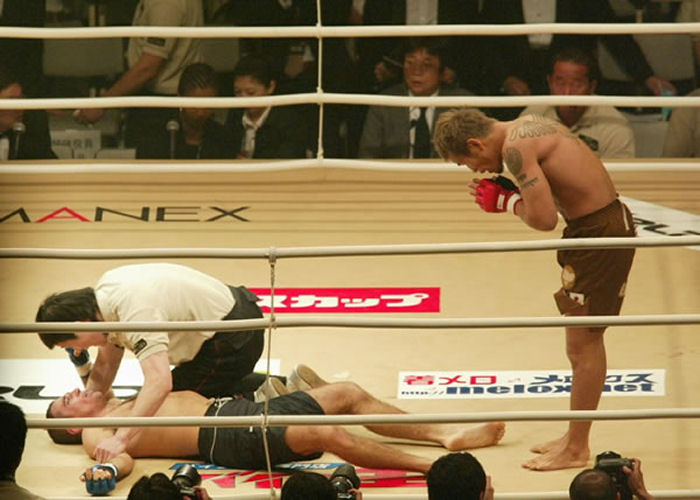 I was always a fan of Yoshihiro Akiyama – or Sexyama, as he’s called by his fans. When he moved from Dream to the UFC he stunned everyone with his amazing entrance. He walked out into the arena with his team, went down on his knees and bowed. Of course, those who knew him knew that that was his customary entrance. Coupled with the fact that the Japanese always have more window dressing than the UFC ever did, it looked nice, but it didn’t really shine like his entrances normally do. Here’s an image of his entrance at UFC 100: Now compare that to his entrance at Dream 5, where he fought Misaki (ruled a no contest due to an illegal soccer kick to the head of Sexyama.) What’s also interesting is the stark contrast between Sexyama’s entrance and that of Misaki. :)