I keep meaning to write about my time in Norway, which was spectacular, but I haven’t really found the time. Now that I’m at home fighting against a bug, I had some time to collect my thoughts. So this won’t be a long post, but a quick recap of the most prominent take-aways. (Disclaimer; the experiences down below are based on my experience in the area around Ålesund.)

The first and most important thing that I took away from Norway is the profound sense of awe at how beautiful the countryside is. Previously, the number one spot for the most amazing country in the world in terms of beauty was Switzerland. The reason why Norway overtook Switzerland was the coastline. One of the things which I may have mentioned on here before is that the idea of living in a land-locked country is disconcerting to me. Sure, there are rivers and lakes aplenty in Switzerland, but it just doesn’t beat a coastline, especially a coastline like that found in Norway. The stillness of the deep fjords is just not something that can be explained in words, or captured in a photograph.

A close second was the absolutely phenomenal infrastructure. From the road network, to the system of ferries, to the nearly ambiguous 4G mobile connection, even in the most remote places! It turns out that when Norway discovered oil off their coast in the mid-20th century, they used a lot of the revenue to upgrade their country’s infrastructure. The country being so large, and thinly populated, it allowed people to live in comfort and luxury in pretty remote places.

Another thing that struck me was that a lot of restaurants closed their kitchens at 19:00 and closed their doors around 20:00. Some restaurants in Ålesund were more accustomed to tourists, but certainly outside of Ålesund it was considered really normal. This meant that we had to eat shitty pizza take away one evening!

That reminds me that everyone always talks about how expensive Norway is to visit, but I didn’t think it was that bad. Don’t get me wrong, it was, but it wasn’t as crazy as I was warned about. Food was probably the thing which was most expensive, comparatively. Inflated by 20% or so, I would say. I’ve been told that prices are a lot higher around bigger cities like Oslo and Bergen.

Lastly, we went to visit the Briksdalsbreen glacier. There is a 45 minute hike through a beautiful valley which leads up to it, and they have sprinkled a lot of different signs with information about geology, meteorology and climate disruption. One of the most impactful thing that they showed was how far into the valley the glacier reached every decade since 1860, when they started measuring. The closer you got to the glacier, the longer it took for another decade marker, showing just how incredibly fast the rate of global warming is increasing.

Here’s a few photos I made which completely don’t do the country any justice whatsoever:

Ålesund from the Aksla viewpoint.

Godøya, west of Ålesund. On the right lies Alnesvatnet, a lake on the island.

Runde island. The puffins are a lie.

The boat through the fjord from Hellesylt to Geiranger.

Edit: Luckily, Joasia and I went to Norway just before the tourist season started. There were some benefits (fewer tourists) and drawbacks (stark weather). Regardless, there were some early bird tourists, like us, and a lot of them arrive by cruise ships, which generally are the worst type of tourist. The stereotypes of the nationalities of tourist tends to be different depending on the place you visit.

In Norway, the stereotypes seemed to be as follows: Chinese tourists yell at one another, no matter how close they are to each other. Indian tourists FaceTime their family members whenever they come across something beautiful. (Ambiguous high speed mobile service, remember?) American tourists fall into one of two categories; either you came in on a cruise, and you’re just there for the gift shops, or you’re a twenty-something and you’ve decided to travel the country by bicycle.

Here’s a quick brain dump of my trip to New Orleans:

Last week, Joasia was in New Orleans for a conference and I decided to join her by flying out on Friday. I flew out through London in the morning and arrived in the early evening. It was quite a long flight, but the flight was comfortable so I felt okay when I arrived.

I made my way to the hotel, got my key, got changed and headed to the conference dinner that Joasia was at. I arrived halfway through dinner, got a quick bite to eat (something light because I was feeling a little dirty inside) and had a few drinks as we socialised a little with some of the people at the conference.

The following morning, Joasia was off for the second day of the conference, while Jim arrived at the hotel. He was gracious enough to fly in for the weekend. We went to get some breakfast and I think this is where things went off the rails for me a little bit.

When visiting the United States, I always have to get used to the food. It’s easy to eat heavy, greasy and too heavy foods. The breakfast I chose was heavily lathered with hollandaise sauce (which seemed to be a staple for breakfast foods in New Orleans, because it was part of a lot of dishes, I noticed) and I suspect my stomach decided to start protesting, and it didn’t stop protesting throughout my trip.

Jim and I spent the rest of the day going through the World War II museum, which was very interesting, although a bit coloured, especially in regards to the Pacific theatre. The museum was set up in a way to convey a particular narrative, which is something I’ve been seeing more lately. Most notably, the Museum of the History of Polish Jews in Warsaw. I’m not sure how I feel about it, because it becomes very hard to draw your own conclusions instead of adopting the conclusions provided to you through the narrative.

The rest of the weekend was spent exploring the city, especially the city’s multitude of restaurants and bars. We also went to Jean Lafitte National Park for a two hour hike through the bayou where we saw a dozen alligators, which was kind of awesome. 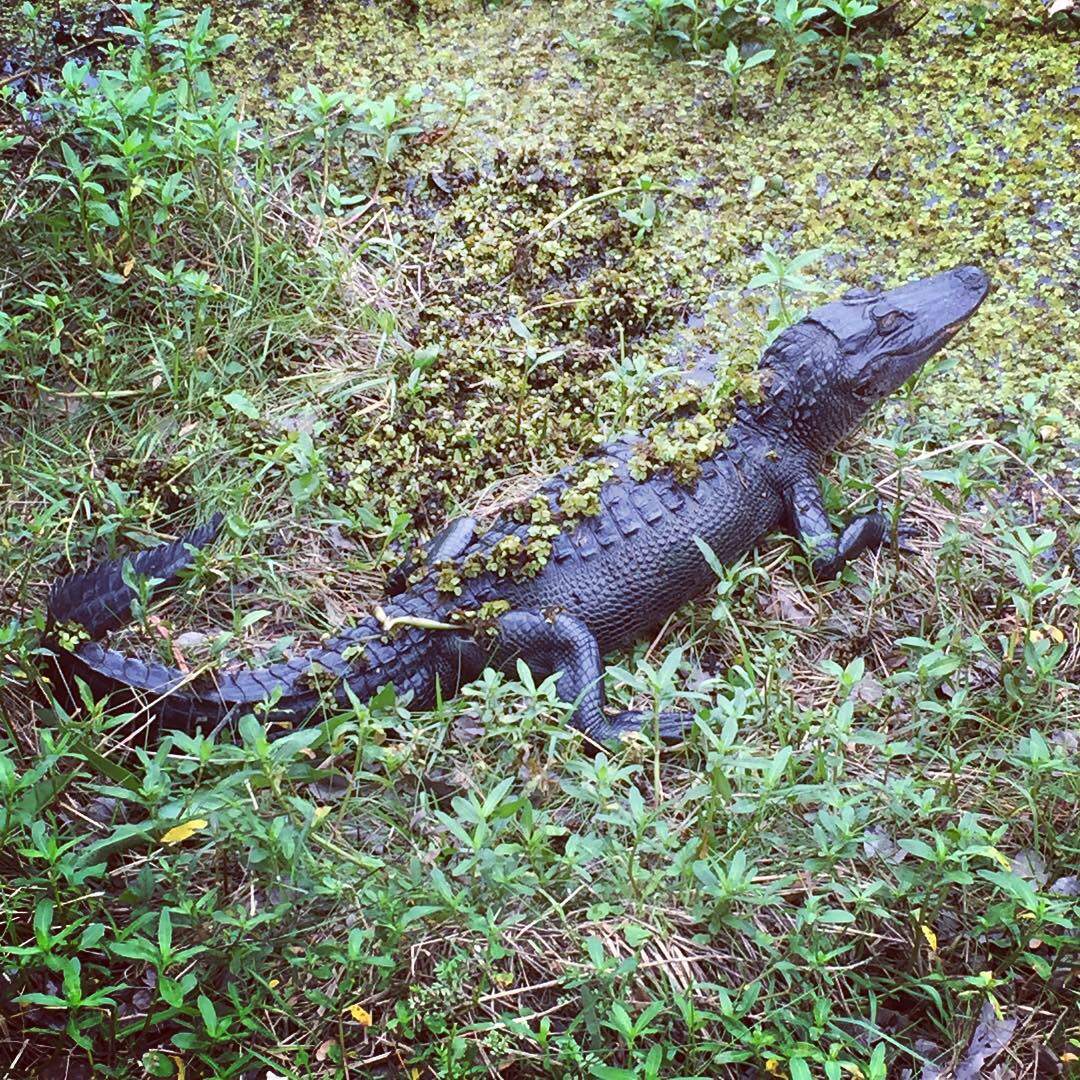 We had arrived in New Orleans just after Mardi Gras, and the city was still a mess, with certain streets being a war zone of plastic beads, discarded cups and just general junk everywhere. That, coupled with the poverty of certain parts of the city, gave me the feel that there was little going on in the city which wasn’t based on binge drinking.

We went to The Presbytère, a museum on the edge of Jackson Square, which had two exhibitions; one on Mardi Gras and one on hurricane Katrina. I went to check the Katrina exhibit while Joasia and Jim checked out the Mardi Gras one. It wasn’t amazing.

Jim departed early in the morning on Monday, and Joasia and I went to the Whitney Plantation, about an hour outside of New Orleans. There were several plantations to consider, and Joasia decided to go for this one because it was less about visiting a beautiful plantation, and more focused on slavery and the dreadful economics behind it. It was an incredibly insightful, educational, horrible and beautiful visit. The tour guide was an amazingly knowledgeable and passionate man by the name of Ali.

When we got back to the city we decided to visit the garden district and admire the beautiful houses there. Sadly we just missed our chance to visit the Lafayette cemetery, but we went through that on a self-guided tour the following day.

Throughout all of it, I couldn’t help but be reminded of Gabriel Knight: Sins of the Fathers, a terrific video game I played when I was in my teens, which is set in large in New Orleans. I recognised and knew about a lot of things because of this game. I’m sure when looking back on the game now a lot of things are probably horrible tropes, but I still remember it fondly.

The flight back was okay until we arrived back in London to find that our flight to Amsterdam was cancelled due to weather. When we finally made it home, we had been up for 35 hours and dead tired. And my stomach was still giving me trouble.

Several weeks ago I traveled to Poland with Joasia to continue the discovery of her homeland. This would be the fourth time we’d traveled to Poland, but we had been in and around Warsaw twice before, and that city left me not too exited to discover the rest of what Poland had to offer. The city is large and bland and uninspiring, which is not surprising considering destruction that was visited upon the city during the second world war. Only a very small part of the old city still remains, which is actually quite cute. But the rest…

When Joasia asked me if I wanted to go to the mountains a couple of years ago, to visit the mountains around Zakopane and Kraków afterwards, I wasn’t so enthusiastic. I was really glad she convinced me, because it was breathtakingly beautiful. Despite this experience, I still was a little reticent when Joasia suggested we go to the north this time, to visit Gdańsk and the coast of the Baltic Sea. Of course, I should’ve known better, because northern Poland turned out to be as beautiful as southern Poland.

Gdańsk itself has a beautiful city center, very reminiscent of Amsterdam because of the trade along the Baltic Sea by the Hanseatic League. Though it was a little bit too touristy for my liking, it had its charm and we found some great places to eat. We visited Malbork Castle by train, which interesting and impressive. But I was really blown away when we start driving along the northern coast, towards Łeba.

We made sure to drive along the small country roads, through tiny villages and the wooded countryside. When we finally reached the coast, it was a stunning mix of beach, dunes, forests and lake side meadows. The forest was quiet, and we even saw a wild deer, the dunes were pretty popular with visitors, but the beaches were very empty, despite the weather being rather nice. 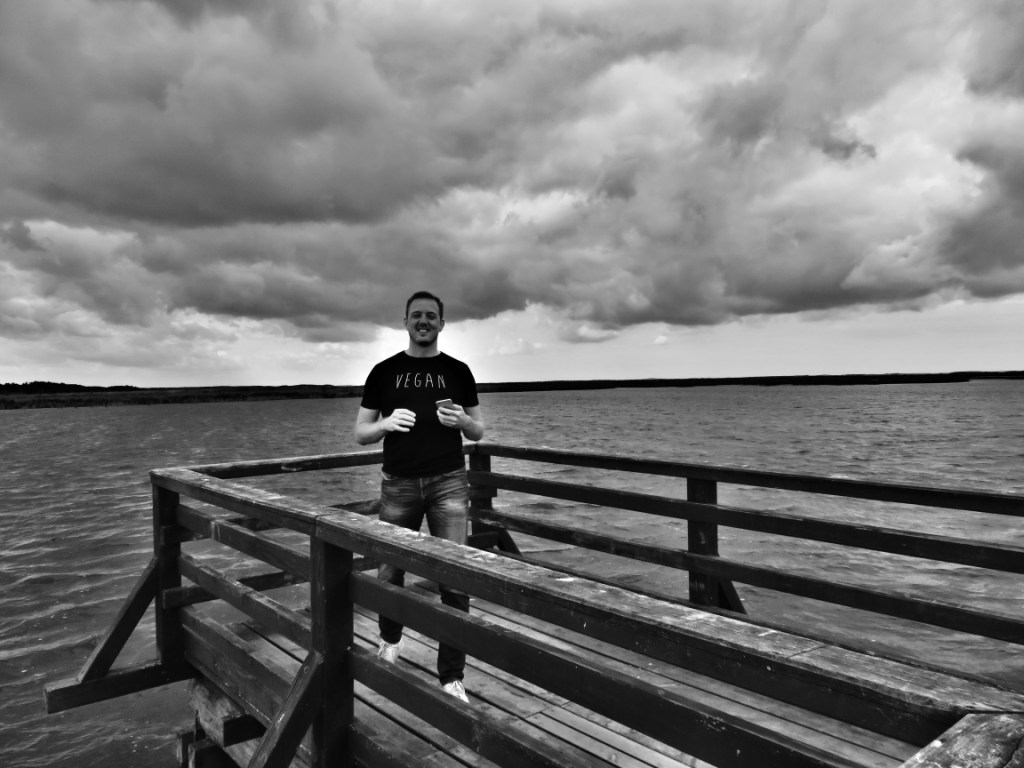 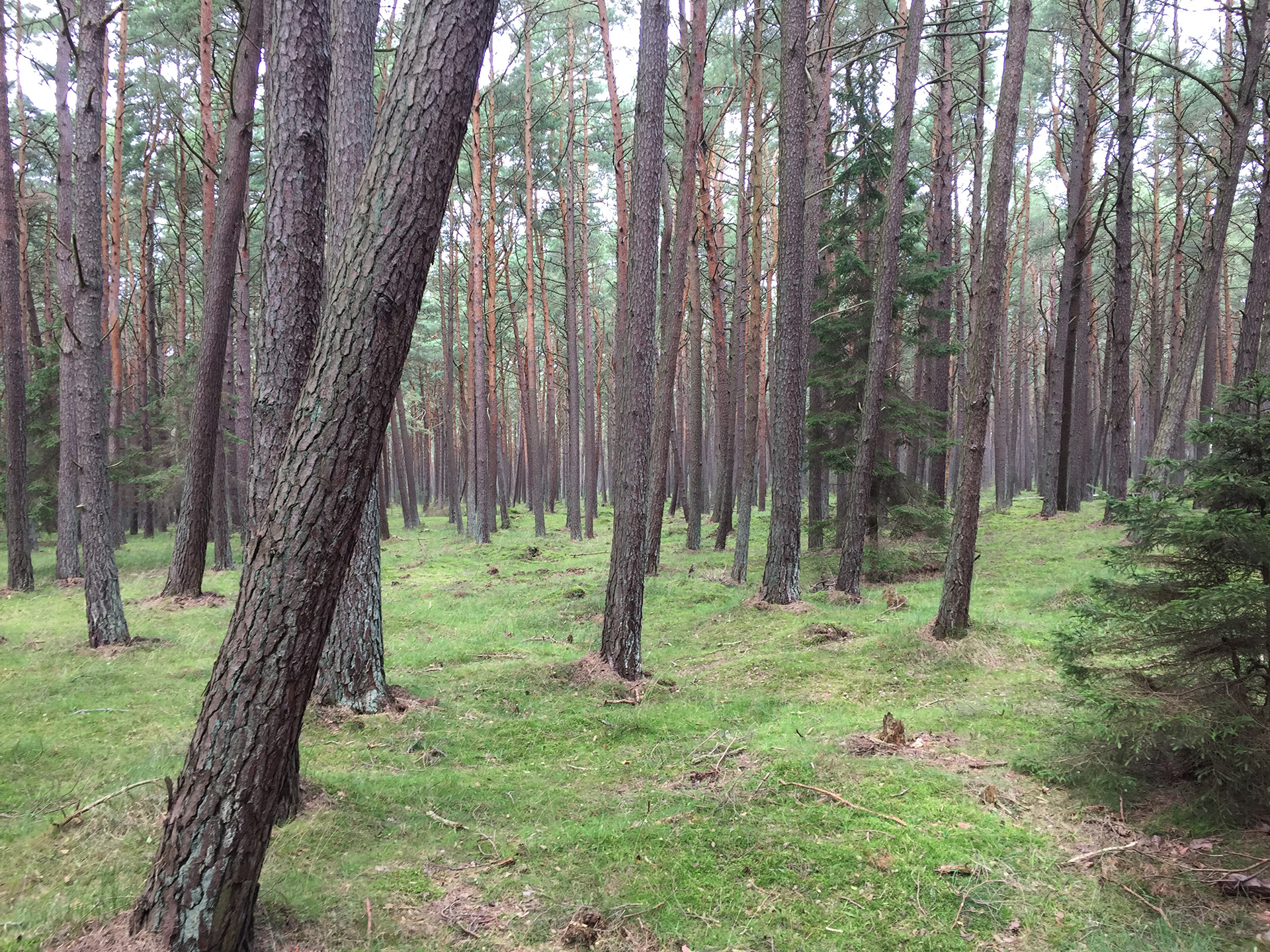 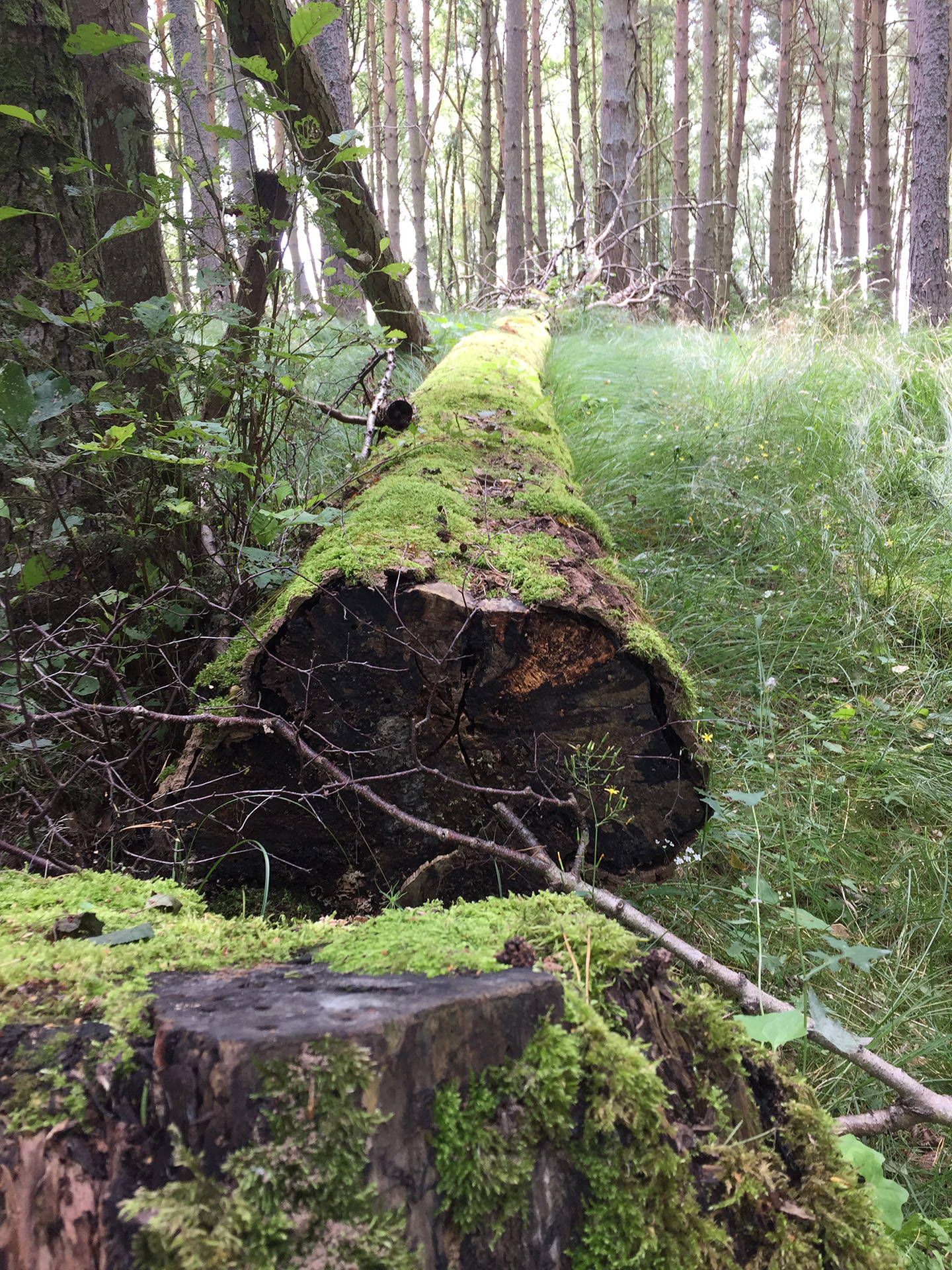 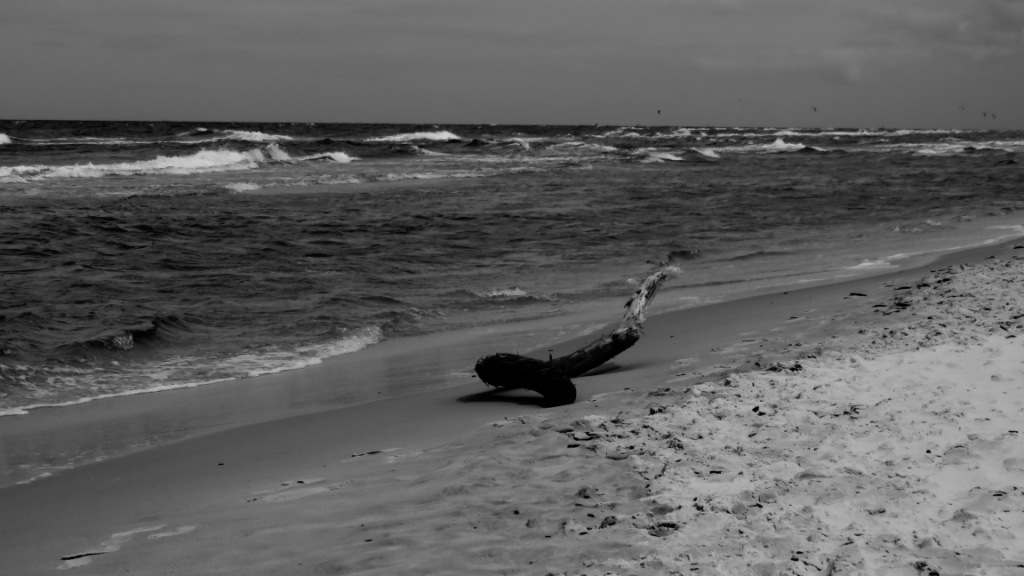 Another very successful trip to Poland. The country is so incredibly large that I’ve now seen some very different countryside from the mountains in the south to the coast in the north. I’ve learned more about its long and turbulent history, and I am starting to understand Joasia and the Polish people better as a result of it. I’m looking forward to the next region to discover, and what I might learn about my partner as a result of it.