Previously, the adventurers departed from Kingsport and headed for Bournemouth. The goal of the first day way to reach the Inn at the Crossroads, halfway to Bournemouth where the Silesian Road split off north to White Fork. They had lunch at the Seat of Friendship, a glade formed by a primordial oak tree, protected by a group of druids who promoted the glade as a communal place. Many different people took their rest there, including a group of three szygani.

Emma decided to approach the szygani and talk about esoteric matters. Vadoma, the defacto leader of the group engaged Emma in a friendly manner. Emma felt confident enough to ask the szygani about the strange gems the group had found in the Lynnecombe catacombs. The szygani said they looked like ordinary crystals and proposed a trade for a silver necklace and pendant, which Emma agreed to.

After continuing their journey, about an hour away from their destination, the group changed upon two merchants who were beset upon by their traitorous guard. The adventurers decided to intervene on the merchants behalf and defeated four of the guards and drove off the remaining two. Trent and Oliver were merchants on their way back to Kingsport but agreed to return to the Inn at the Crossroads with the adventurers, as they were convinced it would be safer than travelling on to Kingsport without protection at night.

The ride from the site of the combat to the Inn at the Crossroads was a quiet one. Trent and Oliver sat on the back of the cart, dangling their legs off the end while Emrys laid in the back of the car, uncharacteristically silent after being seriously wounded in the battle with the traitorous guards. Despite Emma channelling Sedna’s healing graces into Emrys’ wounded frame, he needed a moment to compose himself.

James decided to drive the cart so that Emma could take a look at the flesh wound he had incurred during the fight. She cleaned and bandaged it and was confident it would not lead to infection.

They arrived at the inn around supper time, finding it the size of a small village, surrounded by a wooden palisade, complete with their own guards keeping the peace. Two gates, one looking out over the Silesian Road, the other looking out over the road leading north to White Fork, allowed entrance onto a wide open space surrounded by a stonemason tavern building, large stables with an overhead hayloft, two large buildings with rooms of different sizes and qualities, as well as host of log cabins and bungalows for staff as well as guests.

Outside of the palisade there were several small houses, huts, carts, carriages and tents set up by travellers and more permanent residents. The adventurers noticed another, colourful szygani carriage standing on the opposite side of the junction than the inn. 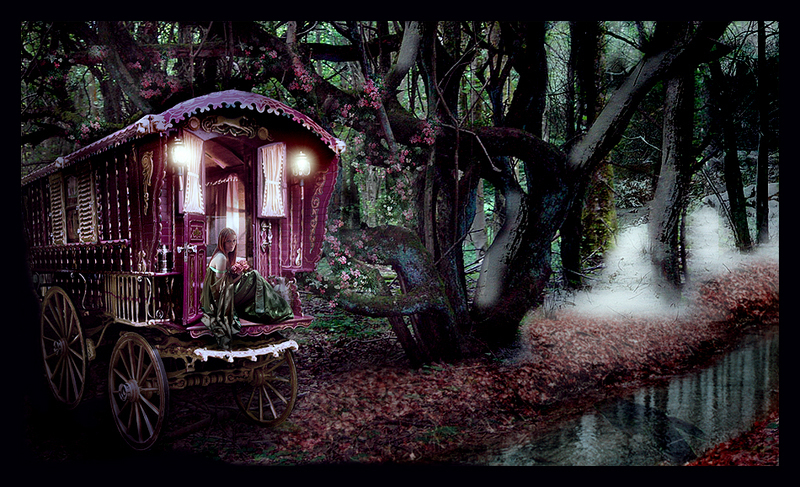 Inside the palisade the adventurers found a liveliness of different visitors, all sitting on wooden tables and benches outside of the tavern enjoying food and drink in the early evening sunlight. The horses were put up, three single rooms and one double room for Astrid and Emma were rented, and equipment was stored away. Luca found a notice board with some random messages pinned to it from some of the locals.

A table was found outside the tavern and the adventurers ordered food and drinks while discussing who among them would be the treasurer of their coin. It was decided that Luca would be the one to mind the coffers.

Later the adventurers were joined by Trent and Oliver, who had talked to the head of the guard about securing passage back to Kingsport the following day. They told a little bit about themselves until James was bored enough to find entertainment in a game of dice, elsewhere.

An agreement was made that they would continue onward to Bournemouth at daybreak, and all retired for the night.

In the middle of the night Emma awakens from something stirring in her room. She instinctively reached for the material foci she needed to conjure a magical light to illuminate the room and found the room empty and Astrid vast asleep. She spent a few minutes looking around the room and when she found the door locked and the inside and outside shutters fastened, she decided to go back to sleep.

When she jerked awake some time later, she was certain something was wrong and she repeated the action of conjuring a light. She found the room empty as before, except for a strange, spectral hand hovering in front of the shutters, trying to open them. She reached out and grabbed the hand and unleashed a shock of malicious energy and the hand disappeared. In that instant, the door to her room opened and she could hear the footsteps of someone running down the hallway.

Emma quickly woke up Astrid and ran down the hall after the intruder, yelling for the guards as she went. When Emma turned the corner towards the exit of the building her room was in, she found the way blocked by a wall. She stood there for a moment, confused. Astrid came running in after her and seemingly disappeared straight through the wall. The confusion grew, but Emma put it aside in favour of finding a different way of pursuing the intruder and she returned to her room.

James had woken up from Emma’s shouting and immediately deducted what was going on. Instead of taking the regular route down, he decided to open the shutters to his the window of his room on the first floor and climb out. While he was doing so, Emma had returned to her room, locked the door behind her and climbed out of her window on the ground floor, too. Both of them set off in pursuit of the intruder who was being chased towards the main gate by Astrid.

After cornering the intruder in front of the closed gate, the adventurers realised that the intruder was invisible and they could only follow their footsteps on the dirt ground, dusty from backing for days in the summer sun. The intruder slipped past the adventurers and headed in the opposite direction, towards the other gate. Emma cast a holy prayer towards the intruder, outlining them in a faint, divine glow. Astrid set off in pursuit while James manoeuvred himself on an intercept course cutting off the pursuer’s route.

When the intruder found their route blocked off by James, they grabbed a hand of dust off the ground and blew it into James face, trying to set off an arcane spell to lull him to sleep. The invisibility spell immediately broke and quickly Vadoma, the szygani shimmered into view. She clearly misjudged James’ heritage or perhaps wasn’t aware of their natural resistance against sleep enchantments, but James wasn’t affected at all.

Eventually, as Vadoma was struggling to make it to the other gate, Astrid and James injuring her severely as they pursued her and eventually she fell and a bag full of red gemstones spilled from her grasp.

Emma gathered the gemstones while James and Astrid made sure that Vadoma didn’t escape. The head of the guard, Milton of Green Orchard, eventually took her into custody and locked her up in a make shift jail cell and put two guards to watch over her. He said he would bind her hands and the adventurers made sure that she would also be gagged so that she’d be hard-pressed to make sure of her arcanist abilities.

The adventurers went back to their rooms and try to get back to sleep. The following morning it was decided that Astrid and Emrys would get the cart ready for departure while Emma, Luca and James went to see if they could talk to Vadoma before she was taken away by the local lord’s guard. Milton explained that the lord’s punishment could be rough, anywhere from lashing, to losing a limb, to hanging. The managed to convince Milton to allow them to talk to Vadoma.

It didn’t take long before Vadoma was willing to talk, provided that the adventurers would make sure that she would be freed before they departed that day. Luca promised to do so. Breaking faith, Vadoma promised, would incur the wrath of the szygani.

She explained that the gemstones she had tried to steal were Lyrium crystals. The crystals were one of two expressions of the powerful reagent Lyrium – the other being Lyrium ore – that could be found around powerful fissures, rifts and portals in the fabric of reality between the planes. These rifts haven’t been seen for thousands of years, since the Age of Fear, and therefore, Lyrium was incredibly rare and incredibly powerful.

Vadoma shared that she would have taken the crystals to Duén Gwyndeith, the Palace of the White Flame in the Worthwilde, and offer them to Hlaith N’Deireadh, the Lady Without Ending, in exchange for protection during the next Age of Fear.

The adventurers reapplied Vadoma’s gag and went to talk to Milton. While Emma and Luca were trying to convince Milton to let Vadoma go, James got frustrated that his companions were actually going through with it and went to help Astrid and Emrys get ready, but not before trying to sabotage his companion’s attempts to have Vadoma freed.

Despite James’ attempts, Luca and Emma managed to convince Milton to go easy on Vadoma by appealing to his sense of sympathy for Vadoma being part of a misunderstood and persecuted group of people, something that Milton could sympathise with. He himself grew up in Green Orchard, but was born in Fulham and as such had to deal with many negative stereotypes about his heritage – inbred, sheep fuckers, dumb, etc. – throughout his childhood in Green Orchard.

The adventurers departed and had a fairly quiet day on the Silesian Road. Their journey took them further and further away from the coast and the road became less maintained and the villages and hamlets fewer and fewer. More and more trees dotted the landscape, casting a blessed shade over the path, shielding the adventurers from the punishing heat.

Eventually, they took some rest outside of the small, hillside town of Eastwarren, just before they were to turn towards the south, towards Bournemouth, the second largest city in Lyria.

Just before the end of the afternoon, as the sounds of the gulls and the sea of the Lyrian Gulf started to wash over them again, they descended down into the valley of the river Bourne and the city came into view. 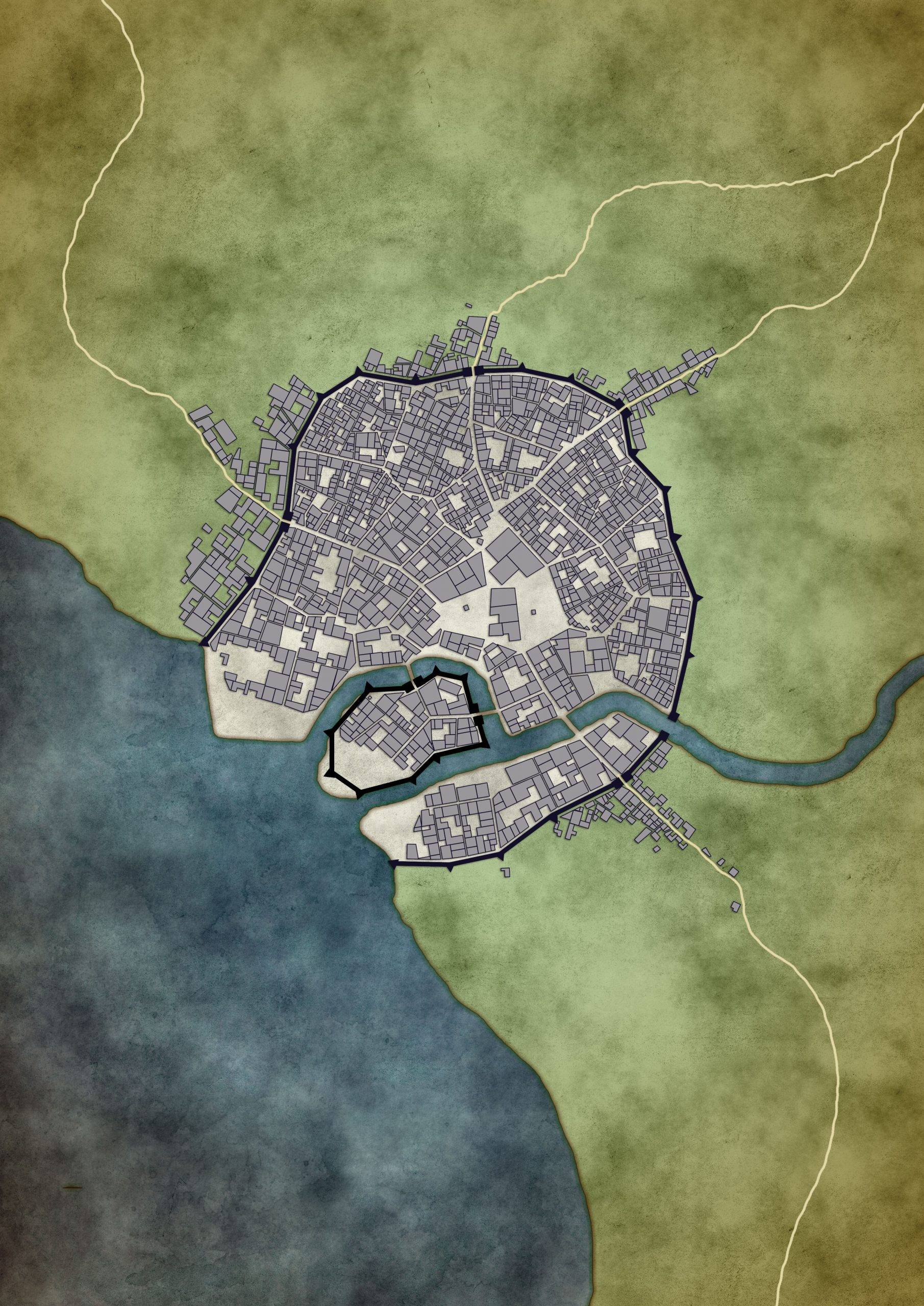