Previously, the adventurers wrapped up all the loose ends in Bournemouth. They engaged Lady Ulrikke von Rosenberg in conversation about her research into strange humanoid creatures stalking the countryside of the Daerlan empire. They could push the research of the frustrated margravine into a useful direction and potentially making a new ally.

The adventurers also spent some time preparing for their upcoming trip by purchasing supplies for their trek towards Pinefall in the foothills of the Silverpines. This included a visit to Alfred Barnaby’s shop to see about some healing elixirs. They found the scatterbrained man unable to reach his supplies due to a ghostly apparition having invaded his basement laboratory. The adventurers went down and confronted the apparition, which turned out to be a pesta, a harbinger of plagues and blights, which they managed to defeat, but not without a stiff fight. One in which Emrys was strangely transformed into a radiant, almost celestial version of himself!

The adventurers readied themselves to depart from the River Stone, heading out to the harbour in order to board a boat taking them upstream towards Egremont with the final stop being Blackbridge. Falka met them outside the inn and walked them to the harbour, bidding them a safe journey.

The ship Astrid had arranged passage on was an eighty foot, two-masted caravel, with triangle, cream-coloured sails. Astrid and Emma, who had carried the company’s chest of riches from the inn to the harbour carried it up the gangplank, at the top of which they were met by two of the crew; Neiman, a blonde-haired man with an even tan and an easy smile, and Ridley a young girl who was easily mistaken for a boy, with a cleft lip and a speech impediment. After Astrid asked permission to embark they were invited aboard with a very warm welcome. 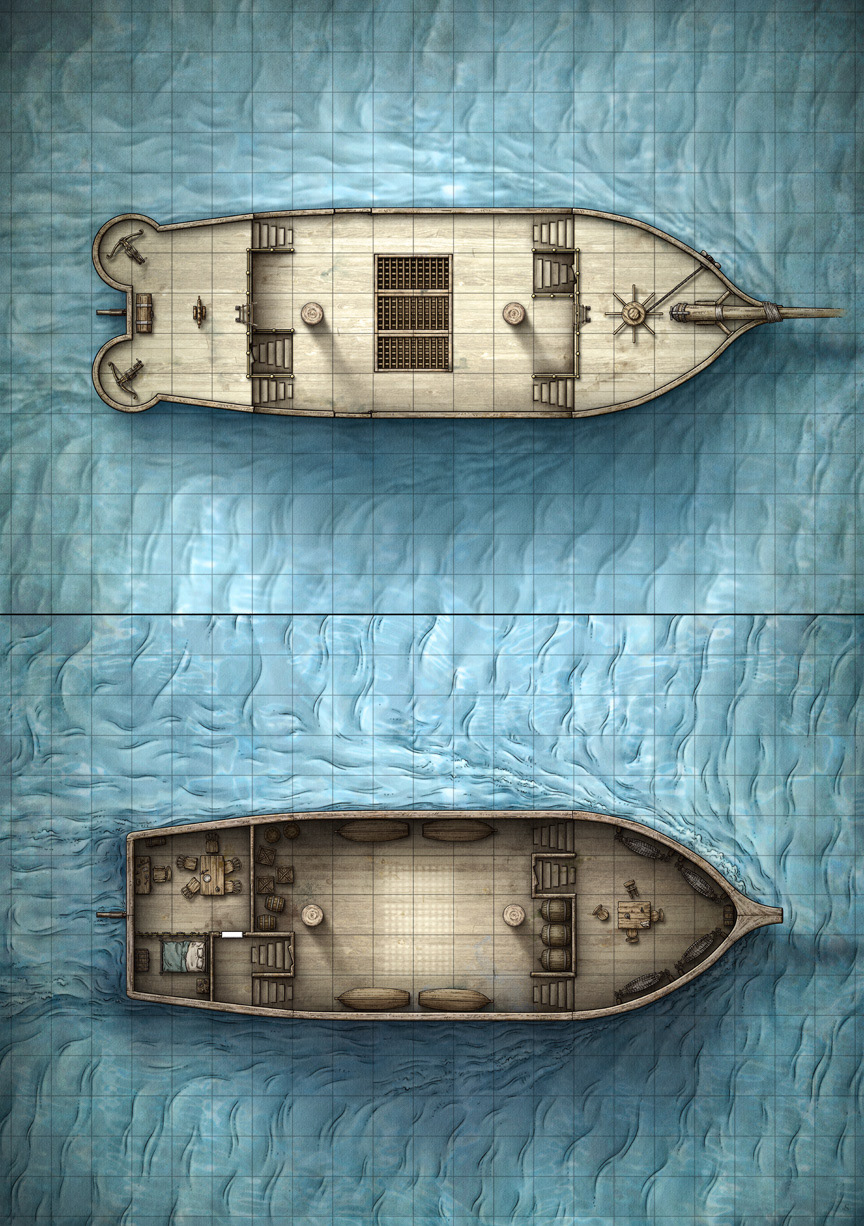 The adventurers settled themselves on the forward deck, where Emrys, who was still wearing a heavy hood and a thick blindfold to hide the strange malady which was afflicting him, sat down with all of their belongings and started strumming his lute, playing a melancholic melody.

Everyone got a quick primer of the rules aboard the ship; the rear deck was off-limits, but the passengers were invited to walk around the main and forward decks. The passengers were also allowed to take comfort in the forward hull if they wanted to, but Astrid warned that it might cause some sea sickness if the weather turned, which prompted Luca to take his place in the middle of the main deck, determined not to fall ill.

James asked whether he would be allowed to climb the main mast and Neiman differed authority to Ridley, who looked James up and down and nodded her approval. James took an interest in the young girl and asked her to show him how to climb the mast, which she happily did. She showed herself to a dexterous and excellent climber.

When Neiman found out that Emma was a priestess of Sedna he insisted on introducing her to the captain on the rear deck. He turned out to be an old, broad shouldered, one eyed man, whose old facial scars read like a map of the world. Neiman invited Emma to bless the ship, the crew and their voyage, which she reluctantly did.

The last crew member was Roddy, a plain-faced, dark haired man who didn’t possess the same charisma or willingness to converse as his crew-mate Neiman.

Several other passengers were aboard the ship; a young lady of noble birth, travelling with her infant daughter and a young, troublesome lordling by the name of Simon. They were accompanied by a middle-aged knight by the name of Dame Idonia, whose half-plate armour and shield were gilded in vermilion, showing her to be of the Order of the Shield.

The last two passengers were a young couple; Rickard of Allenham and his young wife Willow, both commoners on their way from Bournemouth where Rickard studied botany at the academy, to Allenham where they made their home.

Captain Lorne ordered the two bosuns, Roddy and Neiman, to raise the sails while Ridley untied the ropes from the pier. Pretty soon the sails caught wind and the boat started to inch forward. Expertly the captain steered the boat onto open water before turning back towards the city and angling to go up-river along the southern fork of the river, getting a great view of the southern end of Ioun’s Isle and eventually sailing past the Landsdown auction house, where the adventurers saw the two regular guards stand at attention, boiling in the early morning sunlight. Eventually the ship left Bournemouth behind as it slowly zig-zagged upriver.

Rickard and Willow came up to Luca, attracted by the tome he was reading and tried to make small talk with him. Rickard introduced himself and his wife and explained that he was a student at the faculty of natural philosophy. He was delighted to hear Luca’s lie about being a mage studying at the Circle of Mages in Kingsport. The conversation quickly died out and Rickard excused himself and his wife and they went to introduce themselves to the noble lady and her guard.

In the meantime, lord Simon had taken to running around the deck, kicking over buckets, uncoiling ropes and – his favourite – hanging off the side of the railing so far that he could fall overboard at any moment.

Emma, who had decided to use the several hours to Egremont to meditate and further attune herself to Muirgheal, found herself increasingly frustrated by the young lordling and used a sliver of Sedna’s power to project her voice in an impressive way and catch the lordling’s attention. As soon as she did, she saw that she had frightened him significantly, and saw that Dame Idonia was advancing on her quickly. She took a knee in front of the young lord and kindly implored him to obey his lady-mother, who had been commanding him to behave ever since embarking onto the Old Queen.

That seemed to calm the young lord down for a little while, giving Emma some time to focus on Muirgheal. Unfortunately, she felt like the intelligence inside the weapon was at a constant distance from her and she wasn’t able to reach it.

The beautiful Fairfields countryside rolled by, showing off the incredible wheat fields and grazing pastures of the Bourne valley. The different lands and pastures partitioned off from one another by ancient, moss-covered, dry brick walls, like a fertile mosaic.

Luca had grown dissatisfied with being in the hot sun and had decided to take refuge inside the forward hull, confident that he would be able to stomach the motion of the ship without having an eye on the horizon. Inside, he started experimenting with some of the simple cantrips and the effect that lyrium crystals would have on them. He quickly concluded that lyrium was able to act as an arcane focus as well as a universal spell component, which was valuable knowledge to have gained from such short experimentation.

James was the first to notice a strange bank of fog coming up along the river. The crew members picked up on it swiftly and the captain ordered the sails to be lowered so that the ship would slow down. While the bosuns were taking down the sails, Ridley climbed out onto the prow to keep an eye on any possible rocks, banks or debris.

When the ship was completely enveloped in mist, a cry could be heard out followed rapidly by a splash. Little lord Simon had fallen overboard and was in need of rescue. At the same time, malicious humanoid creatures climbed aboard the ship and attacked the crew and passengers. 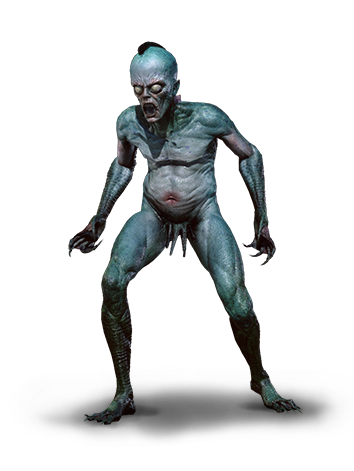 Luca knew them to be drowners, sometimes called muck-dwellers, a hold-over from the last Conjunction of Planes. They were a nuisance in small numbers, only troubling lone fishermen, but they were climbing up the side of the ship in numbers larger than to just be a nuisance.

Emma didn’t hesitate, took Muirgheal in hand and jumped overboard to rescue lord Simon from the drowners who were pulling him further into the depths with every second. In the meantime, the rest engaged the drowners swarming the ship.

Emma valiantly fought off the drowners and almost managed to free lord Simon from their clutches, but the underwater surroundings were new terrain for her to do battle in, despite being greatly aided by Muirgheal. Eventually she succumbed to her wounds just as the last of the drowners on the ship were defeated. Astrid came to the rescue and carried lord Simon to the ship and went back for Emma and Muirgheal.

In the meantime, a new creature had appeared, this one a master of evasion using illusions and invisibility to move through the fog. Its patterns across the ship suggested that it was trying to find something, eventually settling on Muirgheal as it was being assaulted on all sides by the passengers and crew. During this fight, Luca took a chance and cast one of his eldritch spells using a lyrium crystal as an arcane focus and saw the effects of the spell enhanced significantly!

As it tried to escape overboard, James, who had had doggedly been pursuing the strange creature, launched an arrow into it and saw the creature’s body bob to the surface of the water. He dove into the clear waters and caught up with Muirgheal before it reached the bottom.

When he resurfaced he noticed that with the death of the second creature, the fog was retreating, revealing a small rowing boat a little further upstream. Standing on the boat was what appeared to be a young woman wearing a bright blue, hooded cloak. Once she saw James had retrieved Muirgheal she turned around in the boat and it started to move away, further upstream and out of sight.

When Emma was resuscitated and everyone had recovered somewhat from their wounds, the young noble woman came to thank the company for the efforts of saving young lord Simon. She pledged that they would always be welcome at house Tolliver, the family to which she belonged.

With the situation back under control and the fog retreated, the ship went back underway and soon, Egremont came into view.