Previously, the adventurers tried to find the common ground between the conflicting parties in Allenham in the hopes of creating a foundation upon which peace could be brokered. They talked to magistrate Strickland, the healer Syldarael and the farmer Herman, who seemed to be at the epicentre of the racial tension in order to get a better sense of what could put this strife to rest.

The adventurers stumbled upon a mob of humans who were dragging a halfling family of three from their home and tried to put a stop to it. In the middle of James shepherding the halfings to safety while the rest was confronting the mob, a group of Procyon archers opened fire on the mob, killing many of them, before being driven off by the adventurers.

Magistrate Strickland was called to the scene. The bodies were collected and a meeting of notable figures in the conflict was arranged for later that day.

In the wake of the massacre, when everything had been arranged and the adventurers had some time before the council meeting, they decided to investigate the direction in which the Procyon archers had headed. They were able to pick up a trail and start following it. Emma noticed a piece of fletching made from a bright, red feather and made a not of it. 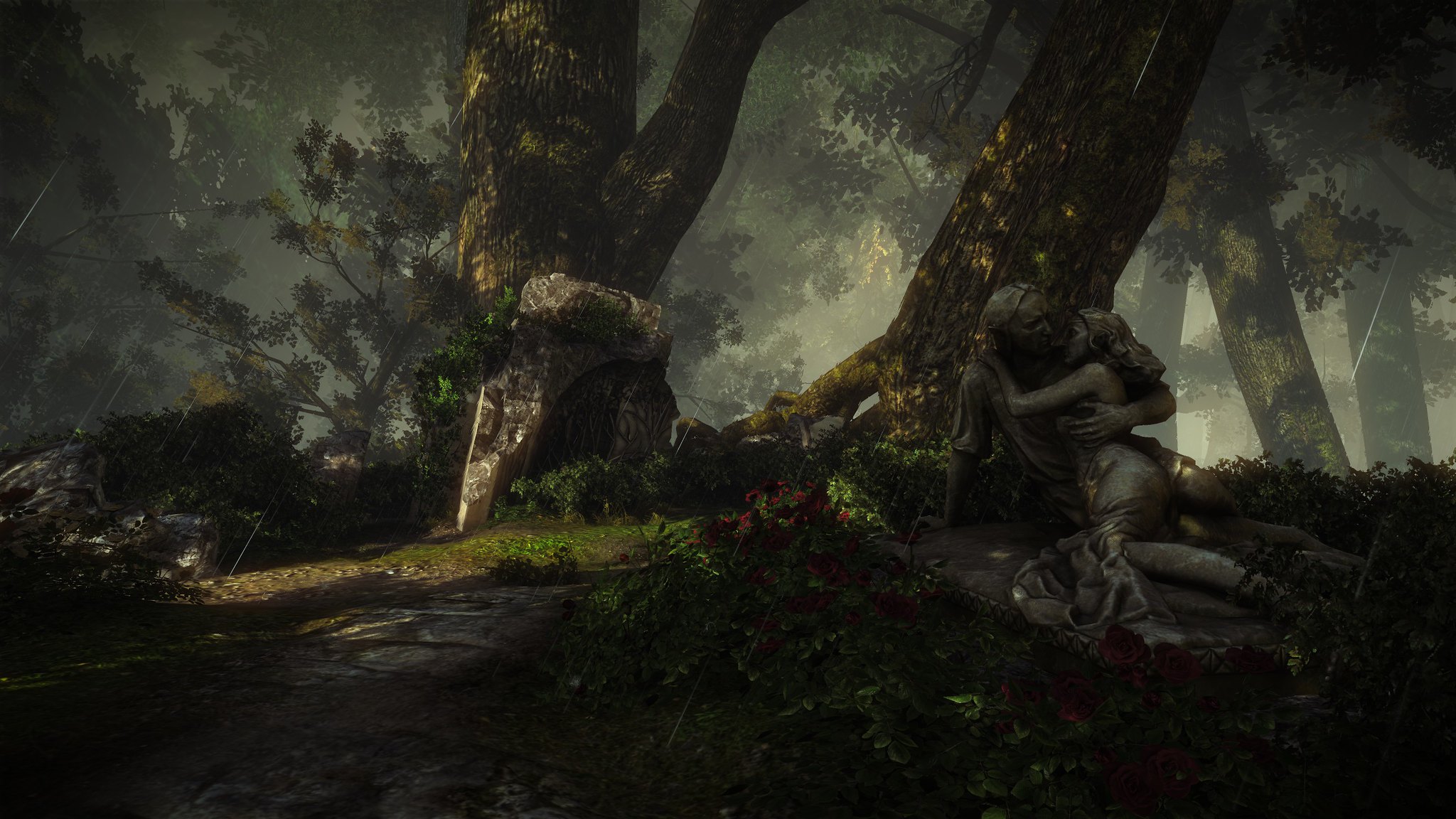 After close to an hour of wandering deeper and deeper into the woods surrounding Allenham, the adventurers stumbled upon a pond at the base of a hill, fed by a small waterfall coming from higher up on the steep hill. The pond had cool, fresh water with all manner of small fish and tadpoles swimming around in it.

Pieces of broken and cracked marble columns and archways were found nearby, indicating a winding path which lead up the hill. As the adventurers ascended higher up the path, the columns became more overgrown with vines of bindweed and beautiful thorny rose bushes.

The top of the hill opened up to a circle of thick oak trees surrounding a ring of marble pillars. These, in turn were the outer perimeter for a long forgotten garden which nature had long since reclaimed with wild roses. In the middle of the garden stood a fountain with a beautiful statue of an elven couple holding one another in a romantic embrace.

The adventurers started to quietly explore the garden, each of them looking out for different things. Emrys seemed lost in thought as he wandered the garden, while Emma was looking for the source of the waterfall and trying to figure out what used to feed the old, marble fountain. James found a very crude shortsword scattered among the briarthorns which was reminiscent of the weapons carried by the loathsome skaven.

Eventually, the adventurers discovered a hose of skaven bodies in a crevice behind the garden, beyond ring of columns and trees. Using some rope, Emma climbed down with James following her. They discovered that the bodies were riddled with deft cuts and arrows which carried the same red fletchings Emma had found near Allenham after the massacre. It was clear they were dispatched by the Procyon.

They searched the bodies and found some trinkets but otherwise nothing of value. One of the dead skaven seemed to be higher in rank, wearing the same thick leather armour which they had seen some of the task masters wear in the catacombs beneath Lynnecombe. James took a knife and cut a section of the leather and took it with him.

By the time they climbed back out of the crevice, the adventurers noticed that the sun was hanging low in the sky. They had no more time to search the shaded garden for they had a council to attend. The adventurers were convinced that this was a place that the Procyon frequented and that they simply hadn’t unearthed the secrets of the garden, and so Luca decided to leave a bit of parchment near the statue of the elven lovers inviting the Procyon to attend the council.

The return to Allenham from the garden was a lot quicker than the way over and by the time the adventurers got to the magistrate’s house most of the attendees had already gathered in a spacious room used for more official business. Strickland, Syldarael, Falibor and his son Balidor were already present, but Herman and Martha were not there yet, leaving everyone to wonder about their intentions. Sylvael dropped in late, and eventually the Allens did show up, together with another senior farmer.

Strickland took the reigns of the council and suggested that everyone should say their piece, state their intentions and desires, and come with any suggestions they deemed necessary in order for the violence and animosity to come to an end. He had good hope that common ground might be found.

Falibor started by saying that there was no dwarven word for forgiveness, just subtle variations on revenge, recompense and retribution. If he was not recompensed, he would depart Allenham and try to make his fortune on the Plains of Strife, or perhaps return to Ard Thoradun.

Syldarael spoke next and told everyone that in her capacity as a healer, she believed that there was a possibility to repair and heal the community. When she spoke about repair, she seemed to be subtly addressing Falibor, trying to sway him to remain in town. She said that she wanted to see the violence stop, and that she was willing to cancel the wedding if that’s what it took. Martha was visibly delighted by that prospect.

When Herman spoke, he aired his grievance about the unfair distribution of new farmland and that the land that had been allocated to the Stubbs family should rightly have gone to him, or at least a human family. The Stubbs family was the halfling family attacked by the mob earlier that day and had decided to depart Allenham after the violence.

The remainder of the time the Procyon activity was discussed. Strickland decided to send Kedelon back down the river to Blackbridge the following morning in order to appeal to captain Randall for some of his guards to be temporarily dispatched to Allenham until the tempers had died down. In the meantime he appealed to the adventurers to resolve the situation with the Procyon, making sure that they no longer saw Allenham as fertile soil for them to raise the crops of revolt. In return for their aid, beds and breakfasts were provided at the magistrate’s house, and two beasts of burden would be provided to aid the adventurers in their onward journey.

Before retiring for the evening, Luca found Emma in her room getting ready to get some much needed sleep. He wanted to give her a lyrium crystal and requested that she experiment with it, like he had. He was curious whether the crystal would work like a universal reagent, like it did for his magic, and whether it would boost the potency and the outcome of the divine magic she had at her command. She politely refused, thinking of the divine magic she wielded as a gift from her goddess, which was something she was unwilling to alter or meddle with.

(Silvermoon in low sanction. Bloodmoon is waxing. Darkmoon is waning.)

The following morning breakfast was waiting for the adventurers when the woke up. The guards whom they had seen at the magistrate’s house spoke of a quiet evening with no more incidents of violence.

The adventurers decided to return to the garden in the forest to investigate further. They were convinced that there was some hidden passage. Emma had gotten the feeling that the hill upon which the garden stood was the site of some underground activity which had cracked and split the rock, causing the crevice in which they had found the skaven, and diverting the water from the spring from the fountain of the lovers, to the waterfall and the pond at the base of the hill. She felt that there was a way inside the hill and she wanted to make an effort to find it.

The walk to the garden was pleasant as the adventurers found comfort in the shade of the large, broadleaf trees of the woods. They found the garden as they had left it, with the exception that the parchment that Luca had left behind was nowhere to be found.

Emrys, again lost in reverie, was asked what he knew about the place, and he said that it was the remnant of a community of Aen Adhar, or moon elves, that lived in the area over three thousand years ago. He himself was of moon elf descent, and he knew the names of the lovers depicted by the statue; Mindaran Chillwind and Gwyndeith Starfall.

Emma investigated the fountain and found that the marble of the fountain’s basin was as worn by age and cracked by vines and bushes as the pillars around the garden. Luca, amazed that everything is broken except the statue, decides to attune himself to the subtleties of the magic around him and detects a faint aura of an illusion coming from the statue.

As he came to the realisation that what he was looking at could possibly not be the thing which was there, he saw the statue waver and blur, only to reveal an opening into the base of the fountain from which a Procyon commando emerged, training a drawn bow on Luca and loosening an arrow in his direction, narrowly missing his head!