Previously, after bringing Kalina back to Kingsport dead, James managed to parlay for his mother’s freedom. Unfortunately, she horribly injured and very exhausted. She was rushed to the clinic of the Temple of Pholtus where she was treated by Father Devon. She lost an eye and a strange slug-like parasite was retrieved from her wound. The Heroes of the White Eye would have one night before having to take Jeanne away from Kingsport, conform the agreement with the day master.

(Silvermoon in high sanction. Bloodmoon in waning. Darkmoon is waxing.)

Having returned to the Careless Wanderer together with James and his mother Jeanne, the heroes remained in their luxurious room, choosing to stay away from the public in order not to offend the day master bu reminding him that Jeanne was still in Kingsport.

Quentin had still been holding on to the two letters that he had written the evening before; one to his Lord-father, and one to his bethrothed; Gwenaëlle. He asked Lauryn who he might turn to for a delivery to Beauclair and she directed him to Fast Feathers Rookery, just up Quayhill, no more than a few minutes away from the Careless Wanderer. He was to ask for Toruviel; a name which surprised Quentin to hear. H was determined to to convince Emrys to come along the next morning.

For a second night in a row Luca had spent more time than he possibly should have reading through Kalina’s prayer book; The Disciplines of the Dark Queen. As a result he woke up significantly exhausted and not much the wiser. The rituals or secrets he had hoped to find eluded him, but he was getting a better understanding of the ethos.

During breakfast James decided to talk to his mother about the next steps. He turned to the confusing jargon and cant of the guild, one that he knew his mother was familiar with. He laid out the day master’s demands that she leave Kingsport, and the options that had come to him; either see if he could secure her a position as a servant at the Sheridan estate and allow her to stay close, or bring her to the grass plains of Silesia where she could start anew. She chose to former, opting to stay close to Kingsport and her son.

Meanwhile, the rest of heroes sat around, eating their breakfast, trying to pick apart the complicated coded language the two were speaking. Giving up, Quentin asked Emrys to join him in his trip to rookery, to which Emrys agreed.

After breakfast James decided to take stock of all of the things he had been storing inside of the magical bag he had been given by the day master; including some of the items they had retrieved from the Reaverhaunt caves that he never got a good luck at. These included the following:

Luca took a few minutes to prepare a ritual in which he could sense if any of the items were enchanted, which he found they were not. The careful conclusion was that these were mundane items that the bandits had collected during their raids around Northshire.

James and Luca headed to the Silver Cross, the tavern in the Lace where Jeanne had been working and James had made his home for a long time. On the way there, James noticed that they were being tailed by a revolving tail of guild affiliates; different people paid off by the guild to keep an eye out.

When the two heroes arrived at the Silver Cross they found Samuel the Carcerian bartender standing out front. He gave James an uncharacteristically long hug and whispered into his ear that it was not wise to stay for long; the guild was watching the Silver Cross as well. James darted in and out of his mother’s room and picked up only the necessities.

Once they had departed, the duo headed to the Circle of Magi where they hoped they could purchase any potions or ointments that could help them stay safe and healthy in the next leg of their journey. When they arrived, they found entrance to the college obstructed by brother Shakeslocke and the red-robed monks protesting the supposed corruption in the institution. Unfortunately, Olafur, the custodian at the college was not tending to the herb garden out front and could help them inside.

Luca suggested heading out of the city and visiting a man who supposedly sold herbs, salves and ointments. They walked down the Elysian street and out of the similarly named gate. Then, in the shadow of the Bastion of Restraint, they found a cabin surrounded by a fragrant garden of different herbs and plants. A gruff Kaedwyni man who introduced himself as Ecgbrith was found out in front, tending to the garden. 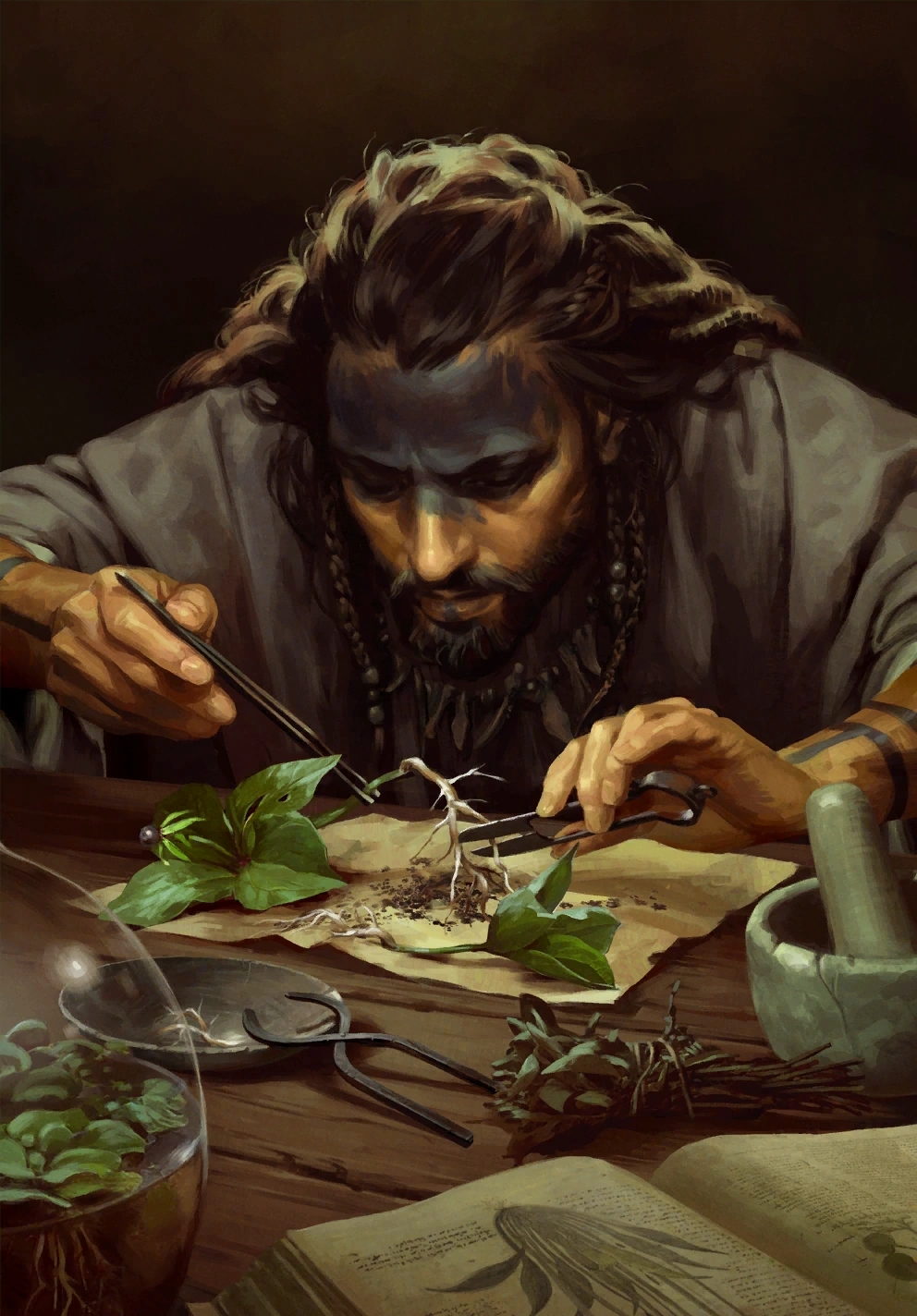 James and Luca found him to be somewhat reluctant at first, but he became a lot more willing to deal once Olafur happened to come walking up. The Miðgarðurian was obviously a frequent patron of Ecgbrith and helped smooth the way. Eventually a deal was reached for several potions. Expensive though they were, Ecgbrith threw in a mysterious potion which he said would help clear the mind.

Luca, having been interested in plants, herbs and fungi ever since getting some strange mushrooms from a guard in his home village once, asked whether Ecgbrith could help him to a herbalism kit. The herbalist put together a small satchel with some essentials that would help Luca cut, harvest, dry and preserve herbs properly and gave him a quick overview on how to use it. It would take Luca quite some time to become adept at what the Kaewyni had told him, but at least he’d have the tools once he did.

The two walked away with three vials of healing liquid as well as a concoction that would “clear the mind,”  as well as a herbalist’s kit. It had cost them a significant sum.

On the way back to the Careless Wanderer the two had a conversation about what the best course of action would be once they had visited the Sheridan estate. Should they go to the Tiverton glades to help the Lady Commander’s family stave off the orc invasion, or should they stay in Kingsport and investigate the illness of the queen?

In the meantime, Quentin and Emrys followed the directions that Quentin was given by Lauryn to Fast Feathers Rookery located at a small but luxurious manse near the top of Quayhill. This walled establishment had several small towers and aviaries in the garden around the building where people were tending to ravens. Emrys noticed that there was a peculiar banner on the outside gate, on the building and on the towers; quartered, with the banner of House Waxley, a turtle on a field of green, taking up the first and fourth quarter, with a black bird carrying a parchment on a field of blue taking up the second and third quarter.

When inside, they found several people behind small lecterns transcribing letters to and from thin strips of parchment fit to be carried by their ravens. After asking about Toruviel Fast Feathers, they stood eye to eye with a slender elf with silvery hair and a tight restraint on his face. After a brief exchange Toruviel explained that they could send letters to Beauclair and that, if properly addressed, the letter would find its way to the correct recipient.

Quentin found it easy to send the letter to Gwenaëlle, watching Toruviel transcribe the letter onto a small strip of parchment with swiftness and ease, but he hesitated with the letter addressed to his Lord-father, Dorian of House Morvrayne. He eventually relented when he was convinced of the elf Toruviel’s discretion.

During this exchange, Quentin asked Toruviel about his name and heritage, and Toruviel explained that he was one of the Aen Gwynt, or Sky Elves, from the mountain range of Ard Thoradun. He explained that Toruviel was one of their great ancestors and a hero among his people. He carried the name to honour their ancestor. During this time, Quentin kept an eye on Emrys, who stood almost motionless, listening, with his hand on the hilt of his blade. Later, when the two had departed the rookery, Emrys thanked Quentin for bringing him.

Just after midday it was time to depart. As people were saddling up and getting ready, Wojciech, the Wanderer’s stablemaster, came to say goodbye to Jeanne. The travel out of Kingsport was done under an overcast sky and soon after departing the city the weather turned sour. It took several uneventful hours to get to Lynnecombe and the heroes were soaking wet when they arrived at the estate.

Lord Marcus and Destan received them in the dining room of the manor and made sure that the servants brought towels, dry clothes and lit the fire in the hearth. Wine and food was brought, though not nearly as lavish as the feast they had received the last time they were at the estate.

A quick conversation about Jeanne’s predicament was settled quickly as Lord Marcus assured James and Jeanne that there would be a place at the estate for Jeanne and that she would be able to earn her keep. It was decided that she would take the place of a stable hand who had recently gotten gravely injured when several bandits had set upon their stables in an attempt to steal the family’s horses.

James revealed to Lord Marcus that the staff had been infiltrated by Steady Hand spies who were interested in books and artifacts coming from the catacombs beneath the estate. While Lord Marcus seemed aware of Harrick, he had not been aware yet of Beatrice, so he was grateful for James’ revelation. He assured James that no harm would befall Jeanne from the Steady Hand spies.

James mentioned that he had learned about the artifact of a small statue which had been retrieved from the catacombs and that he’d be interested to see it. Lord Destan said that this could be arranged in the morning.

Once that had been settled, the conversation turned to a letter that the Sheridan family had received from Pinefall;

My lord, I hope this letter finds you and your sons reunited and good health. I am sure Lord Destan has explained everything about your lands in the southern Silverpine Hills, including the unusual events of the last few months. There are, however, things that the Lord of these lands must be made aware of.

Since the departure of your Lord-son, one of the villagers of Bristlecone (a little settlement in Pinefall) fell prey to an evil spirit. Robart, the man in question, accompanied Lord Destan on his “voyage” and returned having quite literally lost his mind. We were instructed by your Lord-son to care for him as best we could; it was the least we could do in the wake of his sacrifice.

Several days after your Lord-son’s departure some of the crusaders left your lands; some for Gryphon’s Roost, some for their ancestral lands, some for parts unknown. As luck would have it, some of them stayed behind, deciding to wait out the winter. It was to them we turned when Robart was possessed.

The local wise woman, Isobel, claims that Robart having lost his mind left a vacuum that was easily filled. She, together with the crusaders, managed to force the demon to vacate poor Robart. I will spare you the profane and grotesque details, but the process was disturbing. Unfortunately, poor Robart was not strong enough to survive the ordeal.

Isobel and the crusaders have speculated that the demon must have been able to travel between Old Llygad and Pinefall, much like the crusaders did. It does mean that we have to remain vigilant, for others might follow.