Previously, the heroes had prepared to depart Kingsport in order to bring Jeanne to the Sheridan estate. The trip was dreary and wet and when they arrived they were greeted by Lord Marcus and Lord Destan, who agreed to provide Jeanne with a job and a home.

The lords informed the heroes of a stone statue that was retrieved from the catacombs below the estate, as well as about the possession and subsequent exorcism and death of Robart in Pinefall that they were informed about by way of a letter.

After the evening came to a close and the heroes were given quarters to rest in, the night passed by uneventfully for all but James, who tossed and turned and was haunted by nightmares. After waking up in the morning, he quickly wrote down everything he could remember of the trouble dream.

You are running down the dark, vaulted corridors of an ancient waterway. The only light you see comes from the phosphorescent moss that clings to the dirty walls arched around you. Your feet splash noisily through the sewage as they are trying to escape the dreadful mare that has been chasing you since you jumped through the cracked, marble gate at the top of the Crimson Tower into the terrifying realm of Old Llygad.

You know how this will end; the flaming hooves will thunder down on you and you’ll fall and watch as your own blood mixes with the sewage and spills down the drain. You decide to stop running. You turn around and draw your weapons, steeling your nerves and managing your adrenaline.

You see a set of fiery eyes in the darkness ahead and hear steady, deliberate hoof beats splashing into the sewage as they are coming towards you. With every splash, you hear a sizzle as the flames of the hooves are briefly extinguished in the filthy muck, only to be reignited when pulled free. Thick columns of dark smoke, like that of a tar fire, rise up from the mare’s angry hooves.

The smoke rapidly fills up the corridor around you until the only thing you can see are the burning eyes and the occasionally igniting hooves. You work up the courage to strike. You leap forward and your daggers flash through the thick smoke, hitting corded muscle and rugged hide. The acrid smoke fills your lungs and you feel your strength waning. Your agility fails you as the hooves thunder down on you once more; snapping the bones in your shoulder, cracking your skull and shattering your spine. You collapse into the filth of the waterways.

As the smoke subsides, you watch your blood mix with the sewage and flow down a drain, you notice that same, strange eyestalk rise up from the drain and peer at you. It extends to your paralysed body and you watch in horror and disgust as it touches your face and slides across to your left eye and starts to push its way inside your socket. You don’t feel any pain, but you do feel your eye burst under the pressure.

As the last of your life escapes you and your remaining vision grows dim, you see the eyestalk retract and disappear back inside the drain. 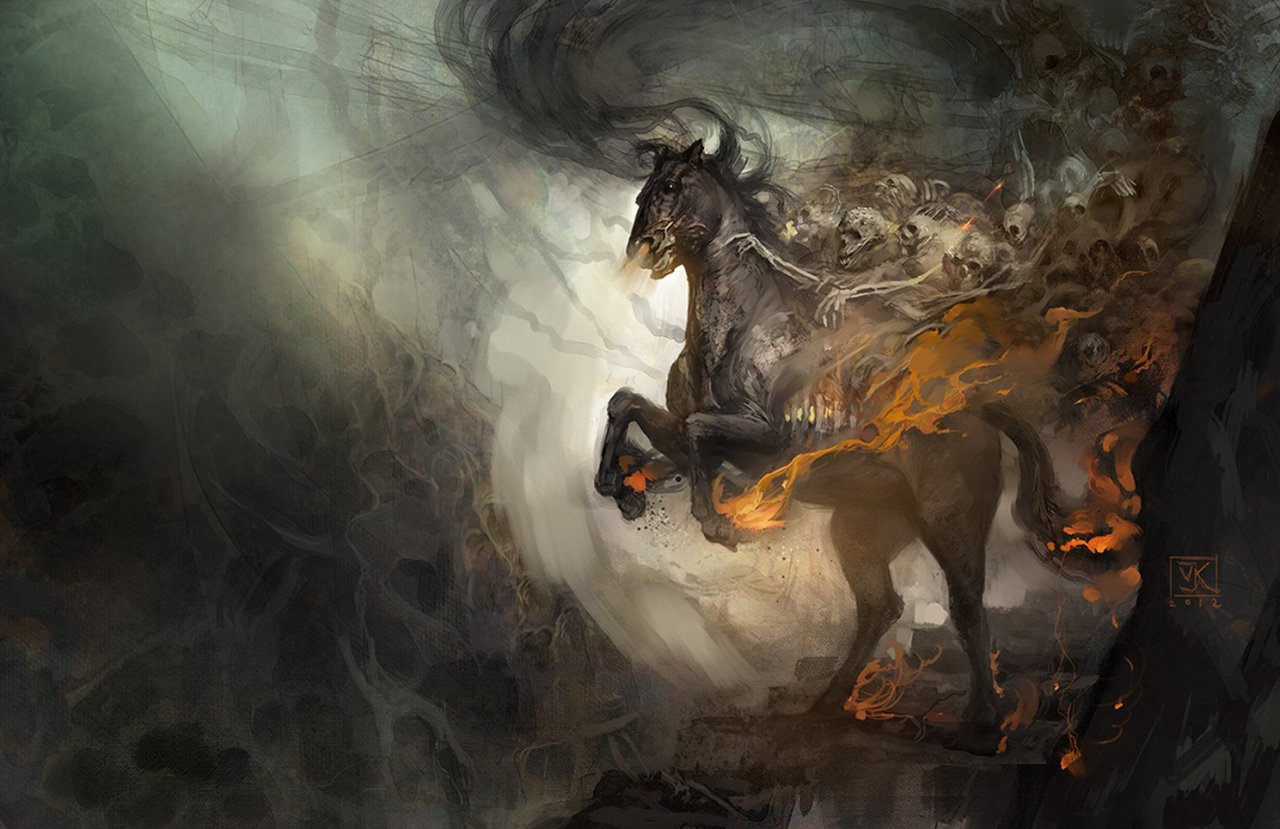 Once everyone got up, Jeanne was introduced to the rest of the servants at the estate and she seemed to be integrating well. She was given clothes and was taken to get instructions on her new work.

The heroes went to have breakfast with the two young lords, during which Lord Destan revealed from a pouch a small, round, conical statue of about the size of a man’s forearm, narrow at the bottom and wider at the top. It was made of stone and had an engraving of an eye in the top of it. James judged it to be quite old, as the stone was weathered and eroded, despite being made of hard stone; multiple hundreds of years old, at least.

The nature of the object was discussed; whether it was one of the beacons that Atilesceon mentioned in his journal pages, or perhaps a key to a vault, like the one that the orc warlord had found in the Elder Foothills, according to the orc scout that they had found lurking outside of the Sheridan estate.

The orc had told them that a warlord had found an eye in a ruin in the Elder Foothills, which lead to the warlord finding a vault with a pair of gruesome axes in it. She had speculated that her warchief might be interested in going down into the catacombs to retrieve an eye as well.

Luca was reminded of the symbol of Ioun when he saw the eye at the top of the stone object, and in a conversation with Destan was reminded that Tharizdun was sometimes referred to as the “elemental eye”, which this might also be in reference to. During a conversation about performing certain divination magics on the stone object, Destan explained that he was not a Circle trained mage, and that he’d rather not get too many people involved in order to keep knowledge about the object contained.

After breakfast was over and James had made sure that his mother would be alright, the heroes decided to head back to Kingsport. For several hours they travelled on horseback through rain and wind, unable to enjoy the countryside of Northshire slowly turning shades of yellow and orange in the autumn.

It was a little after midday when the heroes arrived back in Kingsport; cold and wet. They gave their horses into the care of Wojciech the stablehand at the Wanderer, who explained that he would stable them at the Kingsport Manège due to a lack of space in the stables. It seemed that it was busy inside.

After paying the stablehand handsomely for his effort, the heroes went inside to find it packed with visitors. Much to his surprise, James noticed a familiar face sitting by themselves at a table in the back; Randall, Blackbridge captain of the guard.

Quentin was keen on finding some time with the owner of the Careless Wanderer, Magda, and he found her chatting with an elderly gentleman, but eventually managed to get her attention. She invited Quentin up to her private quarters and they sat together.

Quentin wanted to know more about the encounter the heroes had in the Feywild. It seemed almost like a dream and Quentin hoped that Magda would be able to tell him more about what he saw and what it meant for the heroes to be touched by and in debt to the seidhe. Unfortunately, Magda was not as forthcoming as Quentin had hoped. It appeared that while she had been in touch with the seidhe, she had never been to the Feywild herself and couldn’t attest to what it was like there, but it was obvious that she was aware of the strange rules and laws that governed interaction with the seidhe.

Somewhat disappointed, Quentin said his goodbyes, but before doing so asked Magda, without too much of an explanation if she had ever come across the mention of swans during her interactions with the fey, to which she said that her only recollection was that of the story of the princess and the swans.

Meanwhile, while James was keeping an eye on captain Randall from afar, Luca decided it was time to walk up to him and say hello. The captain recognised Luca and immediately apologised for how he handled the situation with James those months ago in Blackbridge. Randall explained that he had been asked to accompany Callum the Diviner in his endeavour to help resolve the mystery of the queen’s illness.

Eventually, Randall made sure that the heroes had a chance to speak with Callum, who Luca noticed had been reading a book on flora and fauna of the swamplands. Callum explained that it was Emma’s suggestion to Dr. Arkenward and Lady Annabella to get him involved to investigate the origin of the goat’s head that seemingly was the source of the queen’s illness.

Callum further explained that the head was that of a khazra, a bipedal, half-man, half-goat creature that was part of the fabled servitor races, and that the horns were inscribed with arcane runes radiating in strong necromantic energy, most likely a curse. The nails which had been driven into the eyes of the khazra were enchanted with a powerful ward which disallowed Callum from analysing the curse. In order to have a chance at breaking the curse, he would first have to find a way to break through the obfuscating enchantment.

He continued to explain that the enchantment was one woven from very old magic, deeply occult and steeped in folklore. Having come to the end of his ability to divine anything, Callum had begun to use mundane methods of investigation and he had found traces of a rare orchid on the nails and in the khazra’s eye sockets. The flower was called a ghost orchid and he had found that it only grew in very specific conditions, tracing it back to an area between Eastmarsh and the Worthwilde.

When Callum said that he could use some stalwart people to go to the area he mentioned in order to find out who had been harvesting the ghost orchid, which could lead to understanding how had cast the enchantment that prevented him from getting to the curse. Luca seemed interested to take up the mission, but James was not so keen on leaving the city on just a conversation with the old sage and convinced the others that it would be best to field further inquiries.

The situation was an odd one. There were so many unanswered questions. Why was the queen cursed? Who brought the head of the khazra to the queen’s antechamber? Why had the steward been diverting the attention of the priests of Pholtus away from the queen’s care and to finding a cure for his wife’s infertility?