Previously, the heroes went on to explore the the vault at the bottom of the ziggurat at the bottom of Wyrmblood Lake, finding it filled with riches and many curious items, as well as several dragon eggs, gestating in a noxious vapour.

After having explored the vault and having taken many curious items from the dragon’s hoard, the heroes went back up to the large, circular hall and found some rest. It was at that moment that they discovered that the large, red gemstone which they had found among the remains of Xamael was still there. It was at that moment that one of the heroes decided to remove it from the blanket they had wrapped it in and touch the stone.

The darkness that swirled deep inside of it seemed to respond to the touch almost immediately and a multi-vocal voice filled the minds of the heroes;

We are impressed by your dedication to retrieving our sight, young ones.

It was at this point that three, tall figures materialised from the darkness on the edge of the circular hall. Each stood as tall as a hill giant, but slender, with bony arms. One had mottled, grey skin, and was shrouded in red robes. The hood of the robe was deep and horns stuck out from it like a glaive. The face buried deep in the hood was long and alien and did not appear to have any eyes. 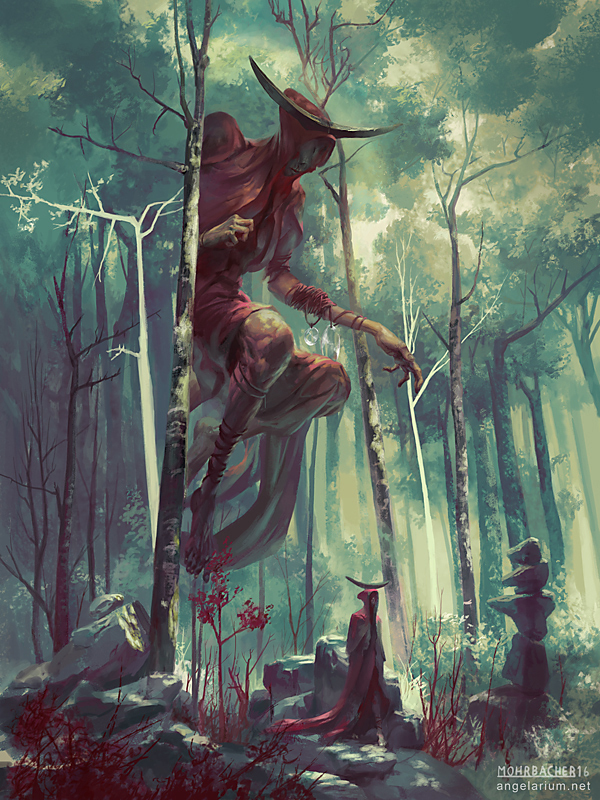 The second figure had mottled skin as well, but this time ranging from light purple to a deep crimson. She was shrouded in a gossamer veil which covered her eyes. Her face seemed fair, but her limbs were long and menacing. 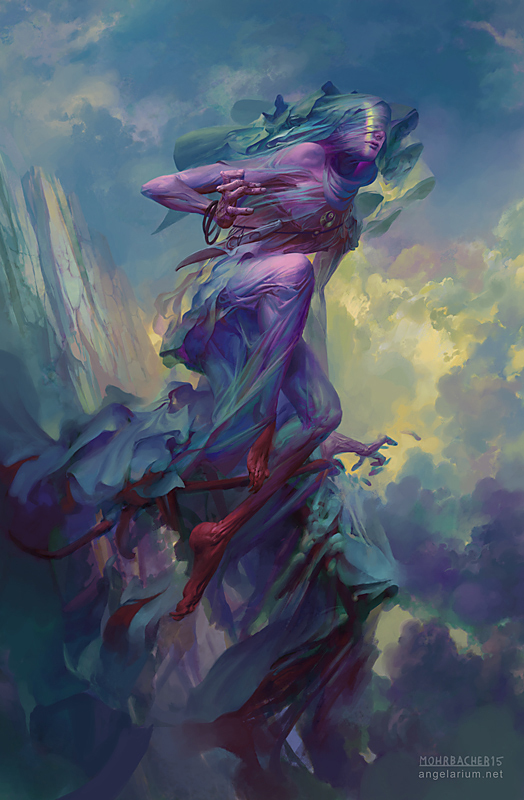 The last one had grey skin and was wearing a gown of flesh, bound together by coarse rope. She wore a skirt around her waist which was made of long arms with bony hands at the end of them. Her face had hard angles and her hair seemed to have been constructed of flesh, which lay drab across her forehead and eyes. 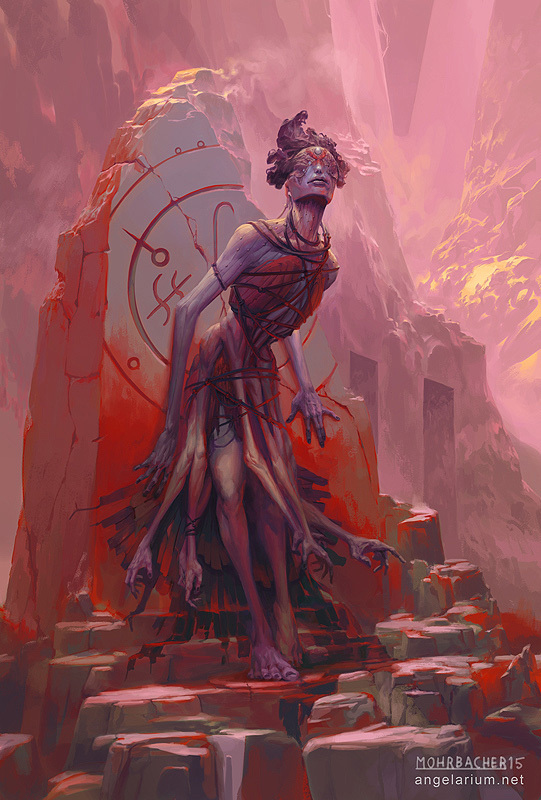 A singular voice filled the mind of the heroes, which pleaded:

Let me touch the heartstone and claim my sight. After I have taken what is mine, we will undo the magicks which have cursed that ugly child which sits on your throne.

The heroes hesitated briefly, but finally agreed. The horned and red-robed sister walked forward and her long, bony arm reached out to the red stone. The swirl of darkness drained away the moment her eager fingers touched the stone and she let out a sigh of relief. The stone crystal turned dull and was left behind.

It was then that the other two sisters silently stepped forward. When they had reached Memra, who had just regained her sight the stood together and reached out to one another, holding hands. The started turning in a circle, like young children might, when singing nursery rhymes.

The weird sisters, hand in hand
Posters of the swamp and land
Thus do go about, about
Thrice to thine and thrice to mine
And thrice again to make up nine.
Peace! The charm’s wound up.

Once their strange dance had ended, they each let go of one another and faded away into the darkness. Three, pristinely clipped, ghost orchids floated down to the ground and came to rest where the good sisters once stood.

The ward has been lifted. Take the heartstone and bring it to the diviner. It might help the amateurs at the circle speed up their search for a way to break the curse. It might show them what real magick looks like.

For your troubles, young ones. Sacrifice awoke the magics in the old soil of the grove. Each flower has been impregnated with the blood of hundreds. They may prove useful to you in the future. Let your masters know that the good sisters continue to remain neutral in the blood war.

After the good sisters had disappeared and the heroes believed that they were once again alone, they took some rest.

When the heroes had rested up and processed all that had happened, the conversation turned towards Azsharastrasza’s brood, which still lay at the bottom of the vault. The decision was made to lock the vault back up, utilising another one of the lyrium crystals the heroes had with them.

Before locking the vault back up, however, the heroes went down one last time to investigate the many books and scrolls that had survived the ages. James picked up two books, and Luca managed to snatch one as well. Emrys kept himself to the different scrolls that he saw laying around, and Quentin was handed a book on old Celtician lineages which may come in handy later.

There were so many things that the heroes had to leave behind that Emrys decided to commune with Toruviel one last time before leaving the ziggurat, asking them if there was anything of importance to the elves of the Verdant Kingdoms which they might be leaving behind. The sword responded dreamily that the only thing which it thought might be of value was the petrified rose which Quentin had taken.

Before going back up to the surface Emrys made sure to harvest some of the dragon scales from Kalauranthalasis’ broken bodies. Afterwards the heroes made their way upstairs. As they made their way up James took point to navigate them through the submerged room once again, and they found themselves in the stairwell leading up to the top of the ziggurat. They noticed the same discarded clothing and the elaborately decorated abandoned lantern they had noticed on the way in.

It was at this point that they heard a familiar tingling noise and saw that Wynn came racing down the stairs. He explained that the coast was relatively clear and that the heroes were able to make their way to shore without problem. After a small discussion about Wynn’s future, he decided to come along with the heroes, explaining that he had no reason to stay, and solidified that decision with an eager jump into James’ bag, where he made himself comfortable for the trip.

They once again left the discarded items on the stairs behind and made their way to the shore. Emrys made sure that both himself and Quentin made it to shore through a new enchantment he had recently acquired, which allowed both to fly, but the rest went by way of the boat they took from the shore to the ziggurat. The lizardfolk in the villages around Wyrmblood Lake seemed to have gone into a strange trance since the death of the dragons, wailing away in a strange song. This allowed the heroes to make an easy escape without being confronted.

The trek through the swamp was an arduous one, but a few hours later the heroes found themselves at the bank of the river once again. It was the heroes’ hope to come across an Acadian family who would bring them down to Rivermeet by boat.

Eventually the heroes saw an Acadian family travelling upriver and managed to strike up a conversation with them. It took every ounce of charm the heroes had to convince them to turn around and go back to Rivermeet. The family was very reluctant and spoke of a great plague in Eastray. They would bring the heroes to the outskirts of the confluence of rivers, close to Rivermeet and the start of the estuary, but no further.

When the heroes were finally dropped off at the next day they saw that Rivermeet was almost empty and that the quay was almost empty of boats. The few boats that were there were being guarded by red robed members of the custodians. There were only three days left until it was believed that the royal abjurer would lose control of the curse that the queen was under.