Previously, the heroes and their travelling companions were lured deep into the fog by some promiscuous swamp lights while on their way to Blackbough to search for answers on the plight of the cursed Lyrian queen. The swamp lights eventually lead them straight into the claws of an ancient foglet. The fight was short and brutal, killing both Randall as well as Michel, with Astrid, Isalien and Luca nearly perishing as well.

After the battle had been won, the wounded had been revived and the dead had been recovered, James decided he wanted to chop the head of the ancient foglet but quickly found out that carrying that enormous head might be more than he bargained for. Instead, he decided to carve out the creature’s eyes and extract some of its teeth. If they wouldn’t catch him some crowns, they might be a nice souvenir.

Isalien used a thick branch of a nearby tree to fashion herself a crutch to take some of the weight off her injured leg. She began looking around for a good place to set up camp. Even though she assured the heroes that they were nearby Blackbough, the consensus was to wait until morning before heading into town. Before camp was made, Quentin lead some in giving the bodies of the fallen to the swamp by wrapping them tightly in their cloaks and blankets. Isalien asked for them to be placed beneath the high branches of a large cypress tree, hoping that they would become one with the tree as they passed.

When camp was made people took stock of their wounds and began to dress them. Astrid needed stiches and help with a dislocated shoulder. Several people were bandaged and James made good use of his healer’s kit, quickly spending many of the remaining supplies. It was late afternoon and there would be enough time for everyone to get eight hours of rest while still maintaining a watch.

Emrys created a small, smokey fire with some of the kindling that wasn’t completely soaked through. Together with  Luca he spent his watch on the lookout for those eerie swamp lights, which they saw darting around in the distance but never came in closer.

For those paying attention during their watch, they could see that the Bloodmoon was but a tiny sliver in the sky, with the Silvermoon being a beautiful crescent, while the Darkmoon stood in high sanction, casting an eerie blue glow across the swamp and the mist that undulated all around.

The next morning camp was broken up and despite the swelling and bruising of the fresh wounds, the journey continued. As predicted by Isalien, who still walked with the support of her improvised crutch, Blackbough was not more than two hours away.

In Blackbough, all decomposes; be it dead or very much alive. Rot blights trees, seeping sores torment beasts, and the whole swamp emits the acrid, stifling stench of decay.

Emerging from the mist, a small hillock comes into view, on the top of which stands a tall, wooden keep surrounded by a palisade. From the sides of the guard towers cling the soaked banners of the black tree of House Blackbough.

Down the slope of the hillock sits a hamlet of no more than a couple of dozen low huts made of bent logs, occasional crumbling masonry and rotting thatched roofs. A handful of sallow and bent people dressed in muddy robes tend to small gardens or are feeding a couple of sickly goats.

The heroes and their traveling companion made their way up the hillock and saw that the undulating mist receded enough to reveal another hillock in the distance. On top of it stood a large stone structure with a small tower. When they approached the wooden keep they saw that it was surrounded by a wide earthen wall with a tall palisade on top of it. The gate, a masonry structure with thick wooden doors which sat in a gap in the earthen wall and which carried a sturdy wooden tower atop it, was guarded by two well-armed guards. They carried halberds and swords at their side, and were dressed in studded leather enforced by plate pauldrons, gauntlets and splinted boots. Bits of chain reinforced where the leather strips fastened the armour. The gate tower had another guard atop it, as did the towers further along the palisade, each dressed similarly, but instead of a halberd, they carried crossbows.

Quentin was pushed forward in order to introduce the heroes and gain an audience. He seemed somewhat reluctant but proved to be quite comfortable in addressing the house guard in a manner that they responded well to. The guard opened the gate and allowed them entrance on the condition that they would stay their weapons. Inside the gate there stood wooden houses, barracks, stables with a hayloft and even a small granary. A smithy with a masonry forge and large bellows was the only structure besides the gate that was made of stone. In the middle of the yard stood a tall, wooden, multi-story manse with grey slate shingles for a roof. Everything looked quite well maintained.

The guard asked them to stay in the yard and went inside to announce their arrival. Several people came out of the manse, lead by a tall, thick limbed man with a hooked nose, dark, wicked eyebrows and a thick black beard. Lord Oswin’s head was shaved on both sides and he had a single strip of thick black hair that started at a widow’s peak, ran over his head and down the back in a thick braid. Several scars marred his face; one vertical scar along the side of his head, just behind his temple in particular. 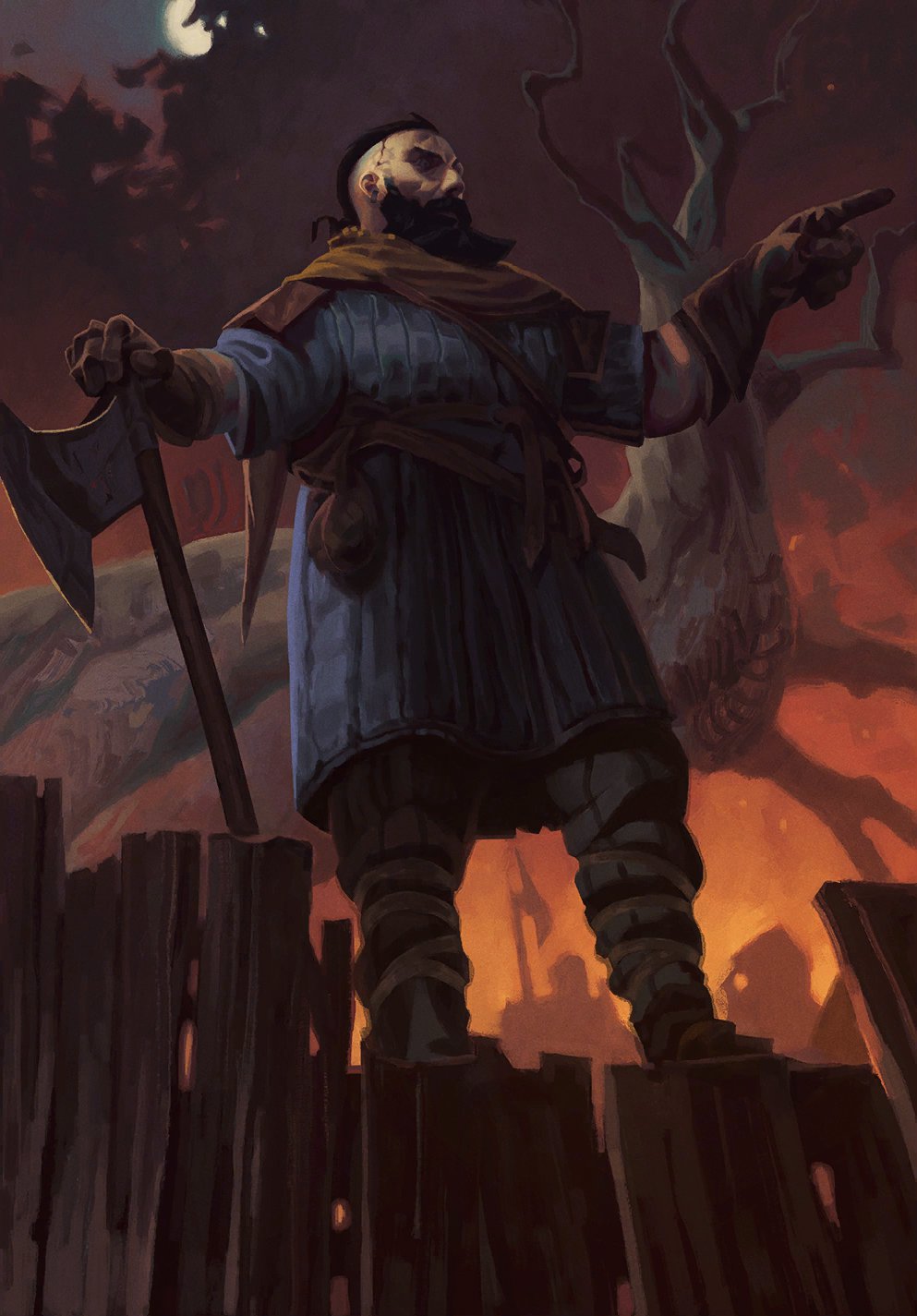 Before the heroes could speak the man bellowed;

Lady Rowyn sent you to come and collect, has she? Well, you tell her that I understand full well what my responsibilities are and remind her of her own; I have requested more men to lay claim to the hargrove and instead of sending me men, she sends me tax collectors. Accompanied by an elf at that!

Quentin assured lord Oswin that the heroes were not sent by lady Rowyn and humbly asked to continue the conversation somewhere private due to the sensitive nature of their quest. Lord Oswin visibly relaxed and invited the heroes to choose two representatives to come inside and discuss while the rest remained outside. Quentin and James decided to follow and they were lead into a large hall, simply decorated, with benches lining the side, but with some large, elaborately carved chairs at the far end where lord Oswin and some of his people took seats.

One of the people who took a seat was a woman beyond her middle years. She was dressed well, but not lavishly, had neatly kept grey hair. She seemed too old to be lord Oswin’s wife, and too young to be his mother. When lord Oswin was asked about where ghost orchids could be found, he professed not to know much about the local flora, but introduced the woman as Ysgith. She said that she had heard of the orchid and claimed that they were legendary and grew on sites of great bloodshed, but couldn’t say where to find one.

When lord Oswin was asked whether any visitors had come through in the last few months, he said that besides the occasional Acadian, the only visitors was a scholar named Fedor who hailed from the Mazurian Hills who had come to investigate the abandoned church of Paladine. Lord Oswin had granted food and shelter to him and his guards and they spent a few days in Blackbough, going on several excursions. They left just before the feast of Midsummer. When asked about the abandoned church, lord Oswin explained that his father, the previous lord, had run the house coffers dry and could no longer pay the tithe to the church. When father Gregory turned to the villagers, who had never been pious followers of Paladine they quickly turned on the father and drove him out and pillaged the church.

Lord Oswin suggested talking to the villagers to possibly find out more about the ghost orchid. In the meantime, he offered the heroes shelter.

So I offer you a fire at which to warm your limbs. Also, a place at my table and beds for you to rest. On condition ye pledge to me one very small things; to respect the sacred laws of hospitality. Also, the elf maid that travels with you will have to remain in the cabin that is provided to you and is not allowed to roam.

Quentin took the pledge and he and James were reunited with the rest of the heroes who had remained outside. One of the guards walked them to one of the cabins on the yard and banged on the door. A servant opened up and was ordered to seek shelter elsewhere. There was enough space for all; a common room had a small hearth, a table and chairs, while the two other rooms had two beds each.

While the heroes were settling in and discussing on how to proceed, there was a knock on the door. A servant had come to bring them a crate of food; bread, cheese, goat’s milk, eggs, water. There was plenty for everyone. The man carried the crate inside and put it on the ground. He wore simple clothing and wooden shoes and as he bent forward, something dangling from around his neck slipped from underneath his shirt. He quickly put it back before hastily departing, but anyone who had been looking at him would have seen the decaying severed hand that was hanging from a leather string around his neck like a macabre talisman. 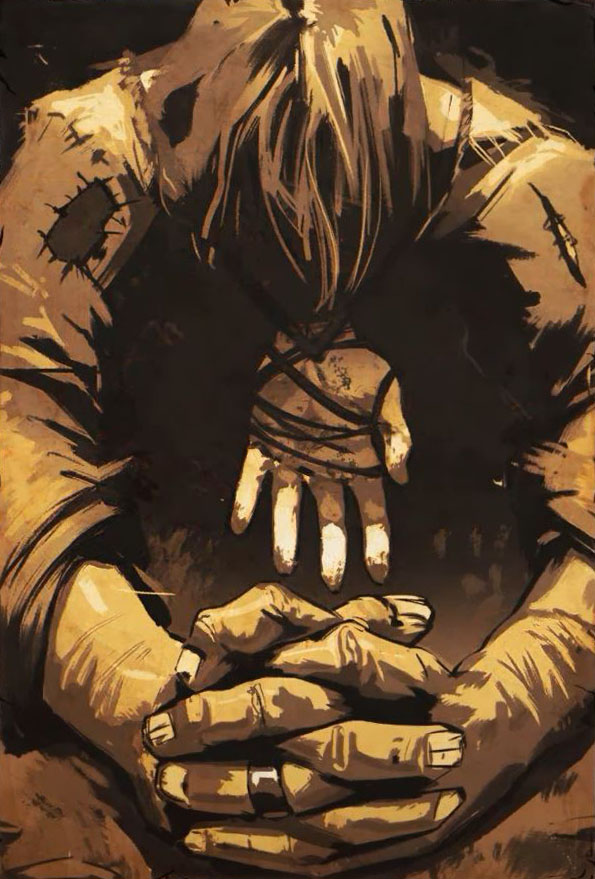