I read somewhere that “getting drunk is basically just borrowing happiness from tomorrow.” When I shared this with my sibs, Robin said that his father said that a hangover is the interest you pay on the loan, which is so true!

I’ve been a little cavalier with my alcohol intake this year, and I don’t like what it’s doing to me and I don’t like the implications of it. Previous years, the amount of times I got really drunk was no more than a handful, which was questionable by itself, but it seems to have really peaked this year.

It hasn’t escaped my attention that these moments of extreme excess usually coincide with periods where I’m not in a good emotional condition either, which is further cause for worry. I’d like to think I’m fairly reflective and that I can use these signs of bad behaviour to rectify what’s troubling me. I just need to hone my skills to do it before crossing the line. I’m nearly there. 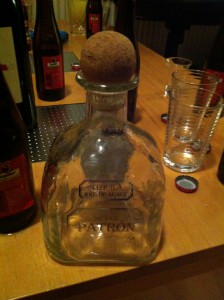 Last night I went to a birthday party of an acquaintance of mine who had suggested to bring something to drink if you didn’t like beer. I dislike beer so I thought it might be a good idea to bring a bottle of Patron that Jim had brought for me when he came over recently. Now, for whatever masochistic reason, the rule is that once you open a bottle of Patron,  you can’t stop until it’s absolutely dry. Luckily, I found some compatriots that helped me out at the party.

It’s a curious habit we humans have. We are literally slowly poisoning yourself into a stupor. I can imagine and understand that a long time ago we did this with hallucinogens in order to achieve a state of spiritual enlightenment, but that aspect has all but completely disappeared and now it’s a voluntary poisoning with little to no spiritual aspect to it.

Now it seems the purpose is three-fold; on the one hand it’s to enjoy the beverage as it is, but it’s likely that the alcohol doesn’t add much to the actual taste of the beverage. Second, I think it’s a tool we use to let down our social guards a bit and be less inhibited to interact with others, but if we try we’re likely to be able to achieve that without alcohol. And third, I think it’s in order to make good on an informal social contract where everyone drinks and you stand out if you don’t. Each reason by itself is a poor reason to drink alcohol and I’m not even sure that combined they’re an any better reason to drink alcohol. And yet we do.

I have that say that I’m glad I was mixing up glasses of this delicious tequila with glasses of water, otherwise I don’t think I would have woken up as painlessly as I did this morning. :)