Last night, during training, I dove onto a kneebar and thought I had it locked up when my opponent went down. Instead, I found myself on the receiving end of a heelhook. Had I realised what was about to happen and hadn’t been so focused on completing my own (obviously sloppy) submission, I would have tapped and things would have been fine. Instead, I can now hardly walk as I have some damage to my MCL.

I’m in good shape, have been living healthy so I hope the recovery will be fast and smooth. It sucks because a) I was on a roll with training, and b) I’m going to go to the land of hiking (Iceland) in a few weeks. Hopefully, I will be in shape for that.

Last night, I had my first real injury from doing BJJ; I dislocated my left shoulder. We were rolling, I was on my back, my opponent in half-guard, I had an underhook on the half-guard side and I was moving to take his back. Basics. Then he underhooked my other arm, pulled it up — and here is where it gets a little foggy — I think he tried to do a weird modified straight armbar, where he put my hand on his shoulder and tried to press against the elbow of my outstretched arm. A little confusing — also for me — but the end result is that I felt something pop in my shoulder and a shooting pain ran along my arm. I hadn’t tapped yet, but he felt my arm go limp so he put me on my back again, at which point I decided to tap. He got off me and asked me if I was okay, and I couldn’t move my arm anymore. I looked at my shoulder and saw that it was a few centimeters lower than it should be. My teacher came up and before I could protest popped my arm back in. That hurt more than it popping out. I iced it for the remainder of the class and inspected it to find no bruising or swelling. I took a painkiller and that was that.

Today I woke up and I found I had a lot more mobility in my shoulder. I can even left my arm a bit again. I don’t think it will take long for this to be healed, but still it sucks. 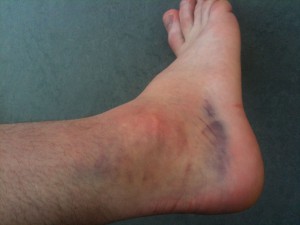 Recently, someone told me that I was being a big puss-cake for complaining about my injuries on Facebook. In order to avoid that happening again, I thought I’d just complain about it here. You see, I have to complain to someone and seeing as how I don’t like to complain to anyone, I’ll just do it here. If you’re here to read what I have to say, you’ve automatically waived whatever rights you thought you had to be protected from my whinging.

I’ve always been prone to certain injuries, mostly to my ankles, which are notoriously volatile. Ever since I was about six or seven years old, since the first time I twisted my ankle, I have had to be careful with my ankles. I’ve torn the ligaments perhaps a dozen times in both feet, and with every time it seems to be getting worse. I’m also getting older, which in turn means that I recuperate less fast and I deal with the injuries for a longer time.

The unflattering photo of my foot here was from two months ago, when, while defending a takedown during a Shooto class, I miss-stepped and tore the ligaments in my right foot. It was very painful and I can still hear the muffled crunch of my ankle giving way when I think about it (and subsequently have to stop myself from getting nauseous.) The pain is one thing, but the aftermath is far, far worse.

I’ve been taking it easy, training a little bit but not doing anything crazy; little wrestling, little judo, mostly ground work and stand-up. And yet, even after having had a month of little training and quite a bit of relaxation, it only takes one afternoon of heavy lifting while I help someone move their belongings to a new apartment and I’m back to square one. It’s not like I can’t jump, or draw a short sprint or, you know, do heavy lifting, but it just hurts.

Last week I decided to go back to training and thinking that perhaps BJJ wasn’t the greatest idea due to all the wrestling, I thought I’d start out with Sanda (kickboxing). While the training was very light, and mostly focussed on technique rather than conditioning, my back blew out three minutes into the warm-up. Being stupid, I continued training and by the end of the two hour class I was crippled. The following day I had a lot of trouble even getting out of bed, and my back was stiff and painful. That evening, however, I joined Eva for “a few drinks” and I didn’t feel my back at all during that time. (Probably on the count of the bottle-and-a-half of wine I had consumed.) The next day my back felt better and it continued to get better. I’m not sure what to think about this, but I’m not going to question it. I’ll take it easy for another week or two and see if I can start doing some stuff again.

In the meantime, my buddy Jim is going to have a kickboxing match this friday evening. (Low kicks and all!) Very excited. Hopefully he’ll do better than the last two people I rooted for; Marloes Coenen and Melvin Manhoef.

.: My Back
So as you may or may not know, I injured my back late in December of 2009. It started out as a sprain as I lifted some boxes improperly after a rough evening of BJJ which hardly gave me reason to pause, especially as it seemed to have sorted itself out the following day. Sadly, the following day I spent all day in an aeroplane, proceeded by five night’s on Jim’s sofa, and another aeroplane ride back to .nl, which compounded the problem. I started feeling as if my back was tired, as if I had a bad muscle-ache in my lower back. New Year’s Eve came and went and the 2010 training season was supposed to start but I thought I’d take it easy, as my back really started to hurt now. I decided to visit my physiotherapist, since he’d berated me quite badly for waiting so long to have my shoulder checked out back in 2008 when it was in fact broken. He told me I was being a big pussy and not to waste his time with little aches like that (mixed signals, dude!) and that it’s something to be expected if you do things like grappling or kickboxing, let alone both! He told me it would sort itself out, but I’d be wise to do a lot of continuous walking, preferably about 30 minutes, every day. I’ve been doing that, and I have to admit it’s not so bad any more, but it’s also not gone. I have to remain patient and let my back heal up, which has proven to be very difficult for me.

.: I Torture Myself…
…with books I don’t understand, because my brain is like a block of obsidian, coated in Teflon, impervious to the uptake of knowledge, and the only way to learn anything is to just smash information to particle bits on my skull until some of it seeps in through a small crack, or something! Currently, I’m reading Full Metal Apache: Transactions Between Cyberpunk Japan and Avant-Pop America by Takayuki Tatsumi, which is a deconstruction of orientalist and occidentalist influences in post-postmodernist literature. In terms of how interesting it is, it sounds far worse than it is. In terms of complexity, it sounds just as bad as it is. About twenty-five percent of the book is annotations. Yeah, it’s one of those books where you need two bookmarkers, one for your place in the book and one for your place in the appendix.

.: Shadowrun: Corrosion
My back being in the sorry state it is has afforded me some time to spend on Corrosion, which is really coming along nicely. We’ve got a solid grasp on everything, and a working, functional framework for everything but the missions (the combat stuff.) I’ve got some ideas on how to go about this, but first I want to finish up all the other stuff so that I can concentrate on that. It’s going to be complex, and I’ll have to make use of AJAX, which will be new for me. By that point, I can also start instructing my brother on some of the additional coding that undoubtedly will have to take place.

I have many other things left to tell, but I’ll leave them for another time.